Beavers cut trees for food 'before they started building dams'

Ancient Arctic beavers were cutting down trees for food at least four million years ago – long before they started building dams, study shows

Ancient Arctic beavers were cutting down trees for food four million years ago, long before they started building dams, a new study shows.

Scientists analysed bones of the extinct Dipoides beaver and plant fossils from Ellesmere Island in northern Canada to work out what the creatures ate.

Tree predation – feeding on trees and harvesting wood – evolved in these now-extinct rodents long before dam-building, they say.

The modern-day beaver behaviours of dam building and food hoarding seem to have been adopted for survival during cold winters.

Ancient beavers, belonging to the fossil lineage Dipoides, lived four million years ago and were approximately two-thirds the size of living Canadian beavers 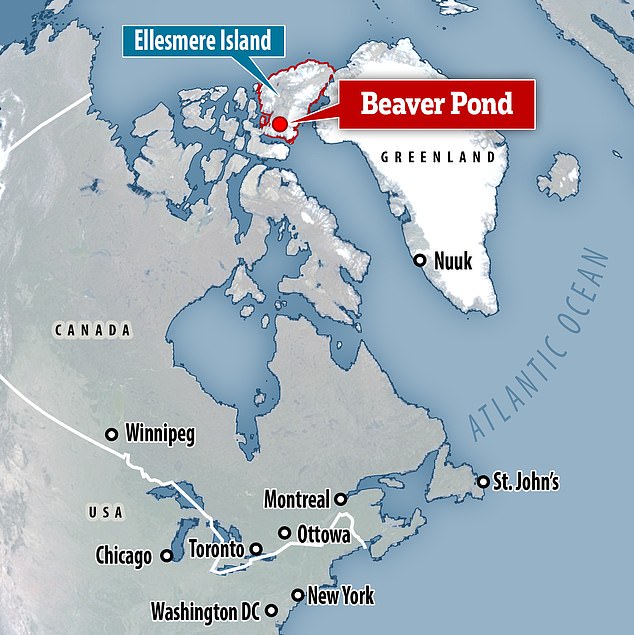 The specimens originate from a peat deposit at the Beaver Pond fossil site, located on Ellesmere Island, Canada

Beavers today are renowned for their woodcutting behaviour and construction abilities.

The modern-day Castor genus harvests trees and shrubs for sustenance, particularly during the winter, but also for the purpose of lodge and dam building.

‘Today, the beaver has a profound impact on the landscape and is known to increase the biodiversity of the local ecosystem through tree-harvesting and dam building,’ said study author Tessa Plint at Heriot-Watt University in Edinburgh, Scotland.

‘It’s fascinating to look back in time and figure out how this hyper-specialised toolkit of behaviours came to be.’

The furred rodents are armed with sharp teeth to fell trees and shrubs and build dams that divert water streams and create big bodies of water.

The semi-aquatic beavers then build their lodges within the bodies of water, giving them protection against predators such as wolves and bears.

Beavers build their lodges from mounds of sticks and mud, just like the dams themselves.

Today’s beavers eat the bark, buds, stems, and twigs of trees and soft plants, like grasses, mushrooms, leaves, ferns and the roots of water plants.

But this act of tree predation has existed for more than 20 million years, enough time that might have allowed beavers to affect the evolution of certain trees species.

Beavers belonging to the fossil lineage Dipoides, featured in the study, lived four million years ago and were approximately two-thirds the size of living Canadian beavers.

They also paled in comparison to another extinct genus – the Castoroides, or giant beaver, which measured more than 6 feet in length. 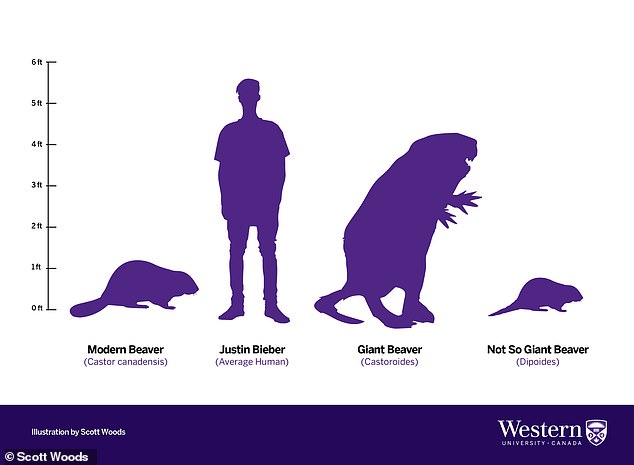 A size comparison of modern and ancient beavers, and Justin Bieber to represent humans. Left is the modern-day North American beaver (Castor canadensis) and right the extinct Dipoides, studied by the researchers. Castoroides, or giant beaver, is an extinct genus

The team think this woodcutting behaviour originated for harvesting food, not from a compulsion for building dams

The fossils used in the study are from the Beaver Pond fossil site on Ellesmere Island (Qikiqtaaluk Region of Nunavut), northern Canada.

Researchers examined chemical signatures preserved in ancient beaver bones to figure out what exactly they were eating four million years ago.

Carbon and nitrogen isotope signatures were preserved in the Dipoides bones and also in plant remains found at the fossil site.

The specimens included a four-million year old stick from the Beaver Pond fossil site, showing cut-marks made by the extinct beaver Dipoides.

‘The isotopic signature of food is passed up the food chain to the tissues of the consumer. In the world of stable isotopes, you truly are what you eat,’ said Plint. 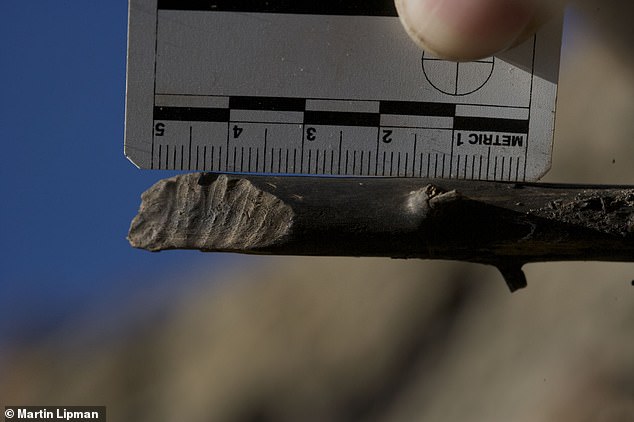 Four-million year old stick from the Beaver Pond fossil site in the Canadian High Arctic, showing cut-marks made by the extinct beaver Dipoides

The isotopic evidence revealed that woodcutting and consumption of woody plants can be traced back to the small-bodied, semiaquatic beavers.

Swimming, woodcutting, and consuming woody plants were all beaver behaviours that preceded and facilitated the evolution of dam building, seen in modern beavers of the castoridae family.

‘Consequently, dam building behaviour is shown as possibly arising only on the lineage leading to Castor.’

In addition to beavers, fossil sites on Ellesmere have yielded evidence of an ancient boreal-type forest and diverse mammal community including extinct species of bear, horse, badger and camel.

The study has been published in Scientific Reports.

HOW AND WHY DO BEAVERS BUILD DAMS?

Beavers are found across the northern hemisphere and are among planet’s most skilled builders.

This reputation has earnt them the nickname ‘nature’s engineers’.

They fell trees by gnawing at their trunks and use the resulting sticks to construct dams to stop the movement of water in ponds, lakes, rivers and streams – creating a bodies of water with a low current.

The mammals then use sticks and mud to create a second structure – a large dome-shaped island that can reach as high as ten feet (3m) tall and up to 1,600ft (500m) long.

Each island includes two underwater entrances and a living chamber above water where the animals sleep and shelter.

Beavers often line the walls of this chamber with dry leaves and plants to insulate it during winter.

It remains unclear exactly why beavers build dams, but scientists speculate the creatures use it for warmth and shelter in the winter and as protection from predators.

Beavers are strong swimmers, and creating a reservoir of water allows the animals to play to their strengths to escape those higher in the food chain.

The biggest beaver dam ever discovered measured 2,790ft (850m) – more than twice the length of the Hoover dam.

The woodland construction, found in the southern edge of Wood Buffalo National Park in Northern Alberta, Canada, was so expansive it could be seen from space.