Work has already started to save some of Australia’s most precious historical records as the National Archives begins what could be a five-year rebuild of its resources and skills to ensure it can continue its vital role into the digital era.

The Sydney Morning Herald and The Age can reveal the government’s response to the review of the Archives by former Finance Department boss David Tune backs a large number of the suggested changes but makes it clear they will take time and money. 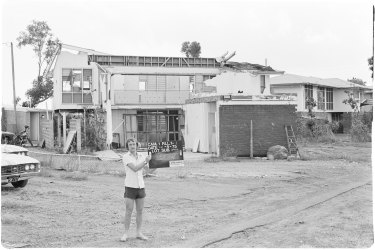 One of 12,000 images taken of Darwin after Cyclone Tracy in 1974. Work has already started on saving these images from “vinegar syndrome”.Credit:National Archives of Australia

“Mr Tune has big ambitions for what is currently a small agency. There will need to be a period of capability building before some of his recommendations can be implemented,” the formal response states.

The review was prompted by concerns the Archives, after years of funding cuts, was struggling to preserve hundreds of kilometres worth of data and documents. Last month, an emergency $67.7 million was approved to help the institution fast-track the protection of its most at-risk documents.

Assistant minister to the Attorney-General Amanda Stoker was “optimistic” it would only take five years to implement key elements of the review, noting there were significant technical and cybersecurity challenges that had built up over a decade which the Archives needed to overcome.

She said the response recognised the value of the Archives’ role and showed the government’s willingness to invest in strengthening the institution. 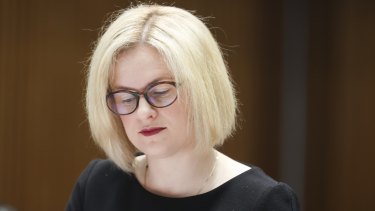 Senator Stoker says she is optimistic it could take five years to fully realise many of the Tune review recommendations.Credit:Alex Ellinghausen

“Now we’ve tackled that short-term concern, we are taking the next step, which is to delve deeper into the long-term plan that’s necessary to make sure this archive is world-class for the long term,” she told the Herald and The Age.

“But we’re dealing with human beings. So we need to be cognisant of the fact that these things have to adapt to the people that are implementing it.”

Part of the $67.7 million boost announced in July will be used to improve the institution’s cybersecurity and further its next-generation digital archives. Longer-term investment in these areas will be considered “as part of future budget processes”.

The money is also going towards preserving and digitising millions of records at risk of disintegration.

More than 270,000 of the Archives’ most at-risk records, including motion picture films, audio-visual magnetic reels and paper documents will be protected.

They include images taken following Cyclone Tracy which devastated Darwin in December 1974. About 12,000 images were taken on black and white cellulose acetate, which deteriorates over time in a process called “vinegar syndrome”.

Senator Stoker said a “historical quirk” had led to the Archives being largely siloed but it now had an opportunity to “step back and connect the dots” between its work and that being done elsewhere.

One of the review’s key recommendations was the Archives take responsibility for information management and archiving across the entire government. This would have required the transfer of more than 600 staff from various departments into the Archives.

The aim was to reduce the many record-keeping and archival issues that have developed over recent years on the back of the surge in information produced by departments that have also had to find their own budgetary savings.

Instead of adopting this recommendation, the government will look at “better collaboration” and training of public servants while creating a committee of senior Archives and departmental staff to find ways to improve the collation and transfer of material.

If that fails, then the government said it would re-examine the original Tune proposal.

Similarly, Tune’s original proposal for the development of a high-tech 5th generation digital archive may be considered once the transition to digital operations happening now is complete and bedded down.

Mr Tune recommended the Archives build a new centralised storage facility with a mass digitisation hub. The government says it supports the objects of this idea, but first the Archives should “streamline existing facilities, relocate the national archival collection and better use key sites”.

An ongoing issue for the Archives has been its overriding legislation, which was drafted in the late 1970s, before the advent of communication systems like WhatsApp or the creation of cloud computing or Facebook.

The government will update the Archives Act to reflect how information is created and collected.