Almost as quickly as reality series My Unorthodox Life started streaming on Netflix, an opposing hashtag was born on social media: #MyOrthodoxLife. Through it, a legion of Jewish women wanted to dispel myths put forth in the Netflix show: that religious life is prohibitive, suppressive, diminishing.

That’s been the line of its reality star Julia Haart, 50, who had exchanged her Orthodox community in New York for another kind of divine life, as chief executive of a talent media company and wife to a billionaire. In My Unorthodox Life, she seemingly worships at the altar of Hermès and is spectacularly non-religious, snacking on non-kosher foods (oysters are a favourite) as she discusses vibrators (often) and fundamentalism (frequently). 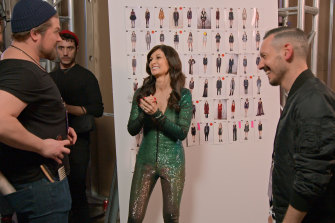 Julia Haart, who exchanged her Orthodox community in New York for a more non-religious lifestyle.

Although she says there wasn’t one reason that prompted her departure, she told The New York Times that her youngest daughter Miriam was a catalyst. “She just wouldn’t conform. They were doing to her what they had done to me – trying to push her down and mould her into that flat person that they could disappear.”

Many Orthodox Jewish women don’t care that Haart shed her former life, but nor do they recognise themselves in her pointed descriptions of that community.

Many have come forward with their credentials as doctors, lawyers, teachers, mothers, feminists. One US-based Master’s student of gerontology, Chana Chava Ford, wrote: “It ain’t all bagels and lox with a side of female subjugation.” While psychotherapist Elisheva Liss, also from the US, pointed out, “Thinking that Netflix shows represent Judaism is like thinking that the Kardashians represent America… they don’t.” 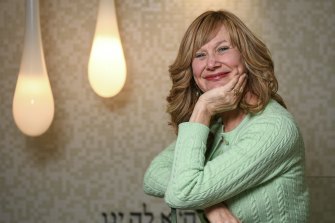 Timmy Rubin did not agree with the way her community was portrayed in Netflix reality show My Unorthodox Life. Credit:Penny Stephens

It’s a sentiment echoed in Australia, not only by those who’ve been born into that life, but for those who have chosen it. Timmy Rubin, from St Kilda East in Melbourne, is Jewish, but she didn’t observe many of the stricter laws of Judaism until she was in her late twenties.

Although coy about her age, these days she wears a sheitel (a wig that some observant wives wear to cover their hair) but since it’s blonde, long and layered, it makes her look more glamorous than matronly.

In her youth, she rode motorbikes through Goa, went to rave parties, had pink hair and “was wild – I loved living on the edge”.

But when Rubin stumbled upon the philosophical teachings of a local rabbi, her interest in spirituality was kindled. “I loved the concept that there’s a godly spark in every Jew that wants to be attached [to Judaism]. I loved the idea that we’re all attached to each other. You can feel it.”

Today, she’s been a prison chaplain for the past 27 years and also runs Melbourne’s main mikvah, a ritual bathhouse for married Jewish women. She says she had to stop watching My Unorthodox Life after a couple of episodes – “it got my blood boiling!” – which is a small shame, because by the end of the nine episodes, Haart reveals she still finds fulfilment with some aspects of Judaism and also introduces her sister, a woman still living in her old community who is as happy as she is strong-minded.

“When I first entered a religious community, I saw that women are the powerhouses; they’re leaders. Many have professions or businesses, and they are vibrant and respected.”

But Rubin wants to make her truth clear. “The idea that women are lesser than men in Judaism – that couldn’t be further from the truth,” she says. “When I first entered a religious community, I saw that women are the powerhouses; they’re leaders. Many have professions or businesses, and they are vibrant and respected.”

Rubin believes that Haart opted out of a spiritual life “for one that seems physical, material”. “That’s the last thing I’m looking for. I wanted spirituality, and became so empowered because of it.”

She occasionally questions some aspects of her religion “but that doesn’t mean that I don’t embrace [it] and love it, passionately.”

Professor of religious studies at the University of Sydney, Carole Cusack, has observed that women tend to gravitate towards religion at two points in their lives above all others: when they’re around 13-30, and then again when they reach old age. Cusack thinks it’s because these are times when the young seek direction, and the older want hope about what lies ahead.

“Some people might feel that it guards them psychologically against mortality and feelings of futility,” Cusack says. “And it also conserves community – it can help with building a strong individual as well as with communal identity.”

Sydney-based Naomi Krinsky, 60, hails from a secular background, but also found solace in Judaism when she was in her twenties. Now, she finds immense gratification through her charitable work, and despite outwardly looking like a person of faith – she wears a sheitel, dresses modestly – she stresses, “I’m still me.”

Before becoming more observant, she regularly danced at discos and so when Fleetwood Mac came on the radio recently, she burst into dance.

“I never threw me in the bin. I will always be me, I just became a little more observant. Do I think it’s restrictive? No.”

For her, faith boils down to how she’ll view her life at its close. “I wanted purpose. I wanted to make the world a better place. We have to love and respect everybody and their choices.”

Make the most of your health, relationships, fitness and nutrition with our Live Well newsletter. Get it in your inbox every Monday.

Most Viewed in Lifestyle