Bluffer’s Guide: How to get by when the music (temporarily) dies

So all the concerts have been cancelled, hey? Yes, when the government announced their ban on public gatherings, musicians around the country had to cancel or postpone tours. 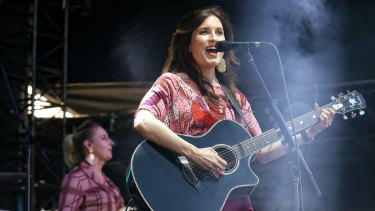 Missy Higgins performing in the forecourt at the Sydney Opera House.Credit:PrudenceUpton

That’s a bummer. It is; not only does it mean we can’t head out and see live shows, it has also left a huge hole in the pockets of the artists, many of whom rely on touring to make a buck. In Australia, the industry has reported more than $300 million of lost income from gigs being cancelled.

So what am I supposed to do with my evenings and weekends now? Apart from reminisce about the rad live music you've seen over your life? The good news is artists gonna art so there’s loads of ways online to catch your favourite artist live(ish) during the lockdown.

Like what? Well, one of my favourite things to do is go down a YouTube rabbit hole and create my own mini concerts. And of one of the best bits is you can skip any songs you don't like. Top picks include Gang of Youths’ super spunky Dave Le’aupepe at Splendour in the Grass on repeat or Christine and the Queens entire Glastonbury set, which I can’t recommend that highly enough.

I want something I haven’t seen before, are there any good ones? Heaps! A particularly great way to kill about 11 hours is the iHeart Living Room Concert. Elton John hosts from his living room and beams into the living rooms of everyone from Lizzo, Billie Eilish, Backstreet Boys to Mariah Carey, H.E.R and Demi Lovato. Alicia Keys even bashes out a rendition of her new single Underdog on her purple piano. Sure some of these aren’t exactly live, but it is a fun show.

So who started this whole gig at home craze? Chris Martin kicked off the Instagram Live gigs, which led to the #TogetherAtHome movement. Since then John Legend, Charlie Puth, Lennon Stella and even our own Guy Sebastian have joined in. You can watch them all by searching #TogetherAtHome on YouTube. The Global Citizen Twitter account is a good source to find what is coming up.

What about here in Australia? Oh, we have plenty, too. The Sydney Opera House is releasing some of its contemporary music shows on YouTube, including Missy Higgins' 2019 Valentine's Day concert, which was brilliant live and nearly as good in the recorded version. They will announce new digital offerings each Tuesday.

The good people behind Isol-Aid Festival are curating weekly Instagram Live line-ups with the kind of acts you might have seen at Bluesfest or Splendour. Jeremy Neale and Didirri were major highlights the first weekend, while today you can catch Sally Seltmann, Ella Hooper and Hockey Dad. Plus the artists are all encouraging people to donate to Support Act to provide much needed mental health and financial support to struggling Aussie artists.

That’s a good point, how else can I support these artists? If you had a ticket to a gig that has been cancelled, hold onto it as a memento and consider it a donation. If their dates have been postponed, jump on and buy your way into the new show. Failing that, get out your credit card and order some merch. Sure it may seem expensive, but that mark-up is going to the artists you love to ensure they can eat and keep making the music you love. Plus, when you wear their T-shirt it will be like they are giving you a big warm hug.