A bride-to-be has been labelled ‘rude’ for treating her wedding guests like ‘inmates’ after she penned a ‘ridiculous’ list of 11 strict rules to send out with her invitations.

The ‘bridezilla’, thought to be from the US, shared her wedding rules on social media, which included ‘no phones’, ‘pace yourself when drinking’, don’t ‘smuggle’ your own alcohol into the event, ‘no nit-picking’ and ‘no rushing anyone’.

Other rules she had included ‘don’t wear white’, ‘don’t show up late’, ‘don’t get in the photographer’s way’, ‘no trying to change things about the decorations’, ‘no big announcements or proposals’, and ‘no posting to social media before us’.

She initially posted her list in a Facebook group asking strangers whether she had forgotten any other rules – but many were left divided over her demands. 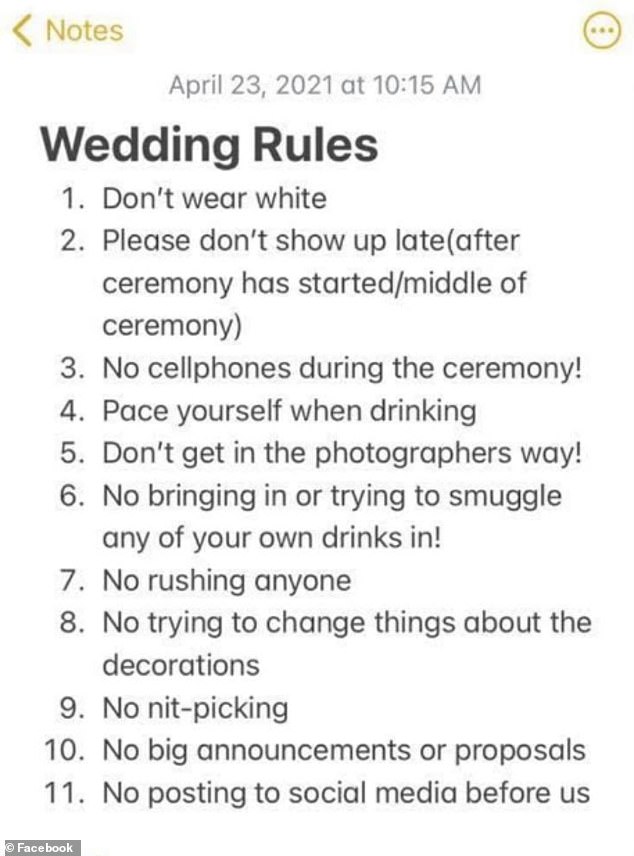 Do you agree with the bride’s rules for her wedding guests?

Do you agree with the bride’s rules for her wedding guests?

‘Surely there is a more polite way of doing this? This is rude. They are guests, not inmates. Surely people know? It’s common sense… If you need to give your guests rules then I think you’re inviting the wrong kind of people,’ one wrote.

The bride responded, saying: ‘How is it rude? My fiancé’s mother needs rules because she is that type of controlling and narcissistic person.’

Many quickly pointed out the bride seemed to have a particular issue with her mother-in-law – and suggested she should have a ‘private conversation’ with her.

‘If most of those rules are directed at your fiancé’s mum, I would talk to her directly if you’re that concerned. Addressing all the guests with these blanket rules seems like overkill,’ one wrote.

However, the bride insisted: ‘She’s not one to just “talk to”. I tried talking to her once about not piercing my daughter’s ears because I wanted to wait and she blew up and swore at us… and walked out.’

The bride-to-be said she didn’t ‘care’ what everyone thought about her rules because it was her wedding day, not anyone else’s, but one person said: ‘The issue isn’t the rules, it’s the way your way of displaying them.’

Many didn’t agree with her list of rules, with one woman suggesting the bride should ask her fiancé to speak to his own mother about her behaviour.

‘Have your fiancé talk to his damn mother and stop treating the rest of your guests like children. Have the “no phones” on a sign as people walk in… Don’t hand people a set of rules like they are in school. This has bridezilla written all over it,’ one wrote.

However, many defended the bride, saying the rules are ‘necessary’ and ‘fair’.

‘I agree with all of them and I don’t actually think it’s put rudely either. They were written plainly and without flowery language but that doesn’t make them rude, it’s just neutral,’ one wrote.

Another said: ‘I honestly don’t see anything wrong with these beyond maybe changing it to “wedding etiquette”, while one woman added: ‘Unfortunately there are people who need to be told these things. She knows at least one and we all know for sure there are plenty more.’

While many argued the bride’s rules were ‘common sense’, a wedding photographer said it was ‘not common sense’ after she witnessed previous guests making the wedding ‘about themselves and I’m don’t mean the ones getting married’.

And many agreed with the photographer, with one saying: ‘In all honesty though, while most of it is common sense, not everyone has that common sense.’