Brits band together amid COVID-19 crisis

Britons may be two weeks into lock-down but the nation is certainly digging deep when it comes to keeping morale flying high amid the coronavirus pandemic.

Randomn acts of kindness, impromptu street dancing (at a distance, of course) and wise words of advice from the older generation are among the ways people are demonstrating the country’s famous unwavering spirit.

In Stockport, a pair of neighbours have been delighting bored children and adults alike by roaming the streets in full Spider-Man costumes, while a charming elderly couple from Ripley, Derbyshire, shared a sweet rendition of Vera Lynn’s We’ll Meet Again – from the comfort of their sofa.

Elsewhere, a family has shared the heart-melting footage of them welcoming home their NHS worker mum at the end of every shift with a huge round of applause.

Here, FEMAIL rounds up just a few of the spirit-lifting acts being shared on social media: 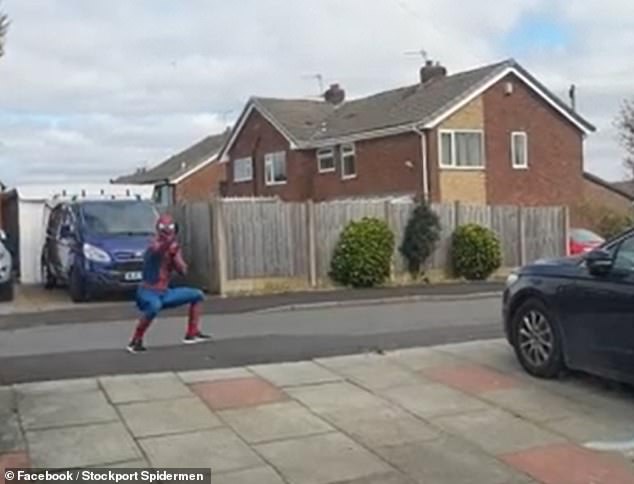 Brits across the country are doing their best to keep morale high amid the coronavirus pandemic. In Stockport, Greater Manchester, neighbours Andrew Baldock, 44, and Jason Baird, 34, have donned Spider-Man costumes and waved at children from the streets 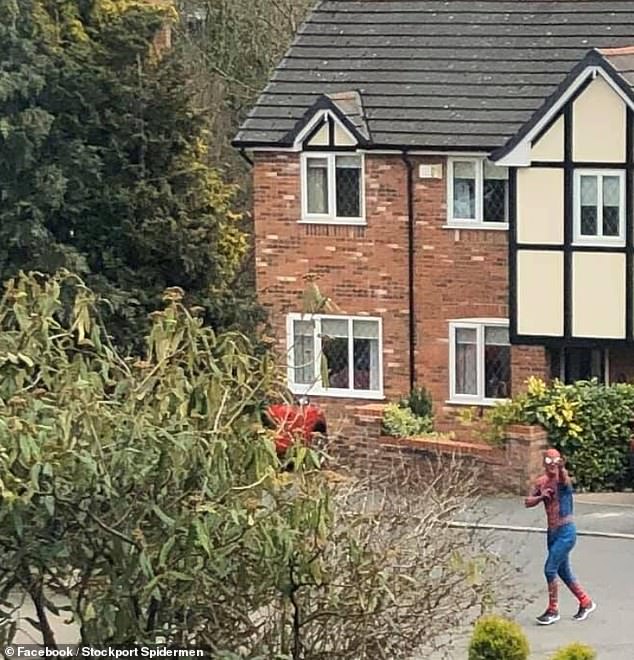 In Stockport, Andrew Baldock, 44, and Jason Baird, 34, use their daily hour of authorised outdoor activity to cheer up the families of their neighbourhood (pictured)

In Stockport, Greater Manchester, two men decided to add a little superhero magic to a boring afternoon, by dressing as Spider-Man, much to the delight of kids and parents like.

The pair, Andrew Baldock, 44, and Jason Baird, 34, use their daily hour of authorised outdoor activity to cheer up the families in their neighbourhood.

They’ve become so popular that a Facebook community is dedicated to keeping track of their outings, and excited children have started putting drawings and words of thanks up in their windows. The two martial arts instructors have even created a social media page to let parents know where they’ll be that day before taking to the streets in their costumes at lunchtime. 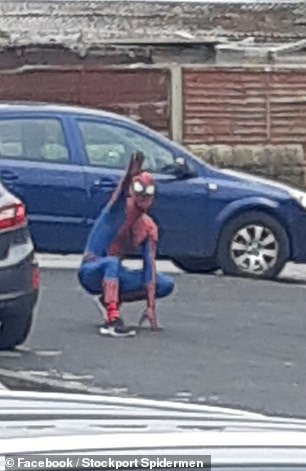 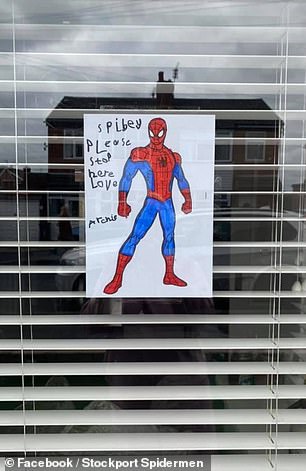 Andrew told the Manchester Evening News’s Manchester Family that he had the Spiderman costume from a former job in retail, and would wear it for events.

‘Jason and I are very much about community so when all this happened I wanted to do something to cheer up the kids in the community so pulled out the Spidey costume.’

He added that Jason loved the idea so much he got his own costume.

‘I have two little ones at home so I know what it’s like for them being in the house,’ Jason said.

He explained he put his costume on as a secret at home to surprise his own daughter. The father-of-two said he would keep doing the rounds everyday to wave at children until the lock-down is over.

IN THE MOOD FOR DANCING (ALBEIT TWO METRES APART)

A street in Cheshire has turned into a makeshift ballroom during self-isolation, with neighbours emerging every morning for some ‘socially distant dancing in the street’. 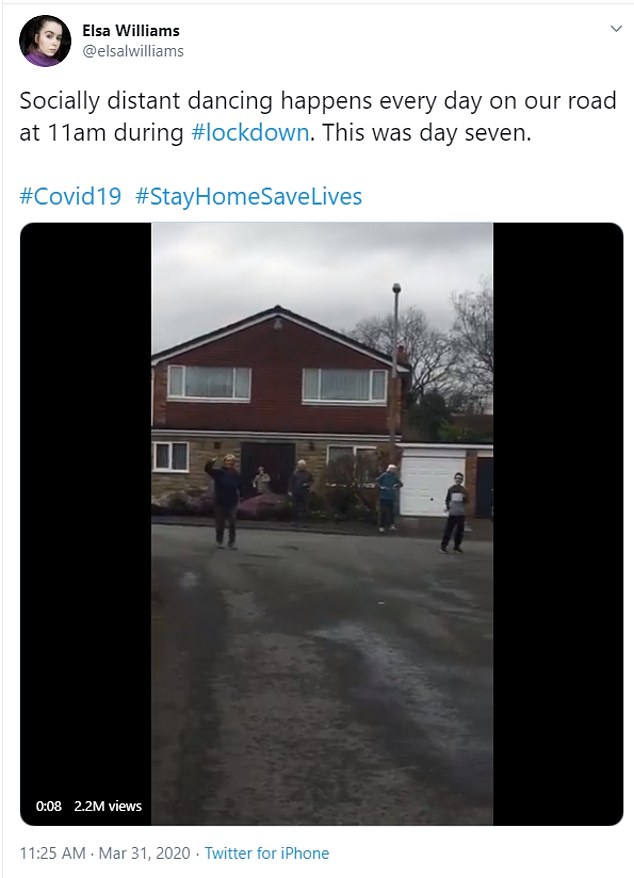 This Cheshire street erupts with dancing – to classic tunes – at 11am every morning and has seen every generation getting to their feet. A video of the morning dance has been shared more than 2.2million times already 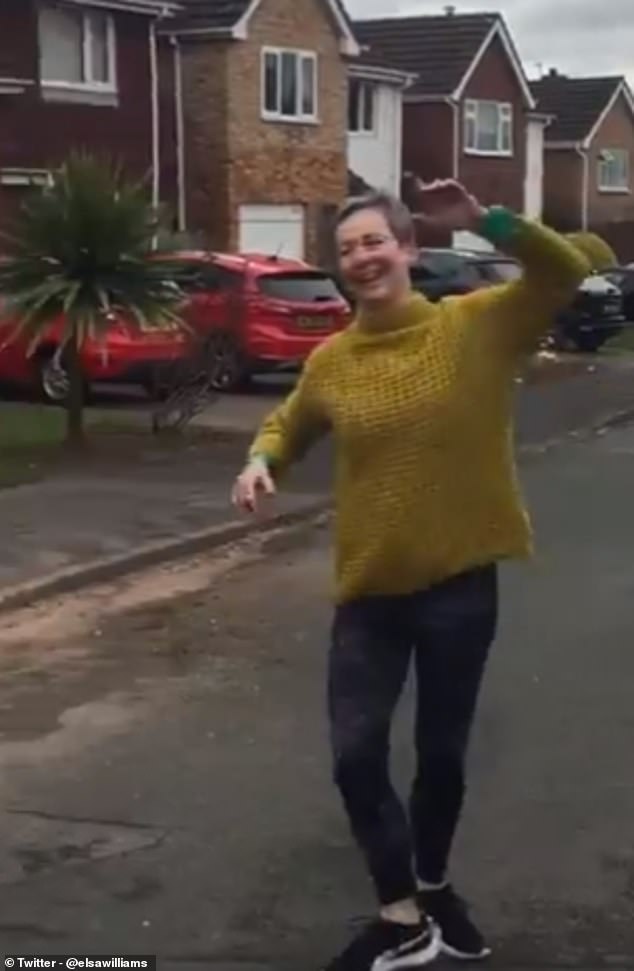 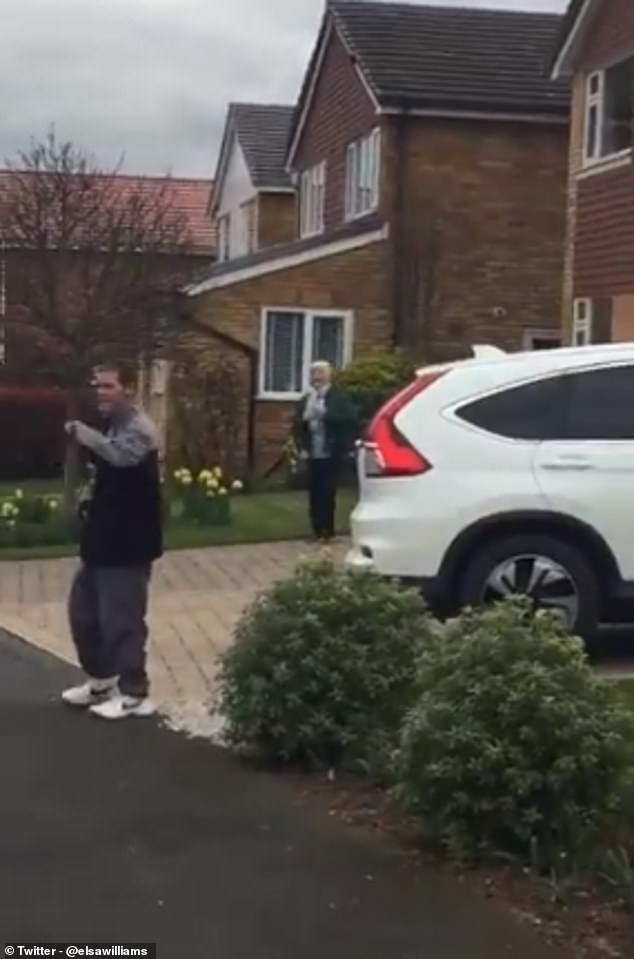 Together apart: Residents dance two metres away from each other on their driveways in the surburban Cheshire street

One local resident, Elsa Williams (@elsalwilliams), 23, shared a clip of the neighbourly dance – conducted at two metres apart on social media, and has since seen the video go viral.

The ten minutes of fun are led by local dance teacher Janet Woodcock and are kept short so other residents aren’t disturbed by the classic hits – including Tom Jones’ It’s not Unusual blaring out.

PUT THE VAC ON, WILL YOU? FRONT GARDEN TEDDY BEARS PICNIC 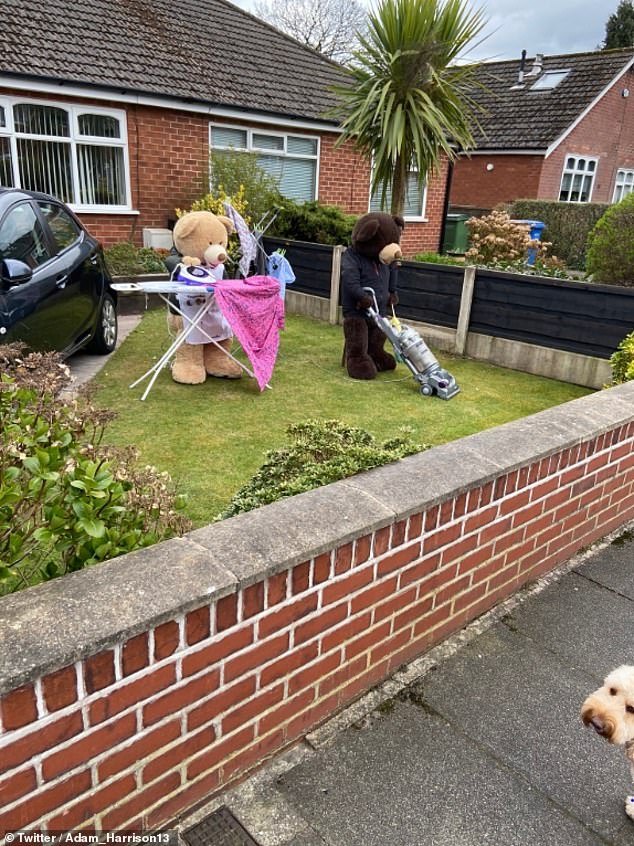 Adam Harrison, who lives in the UK, noticed his neighbours in this residential area put together a display using large toy bears in their garden (pictured) 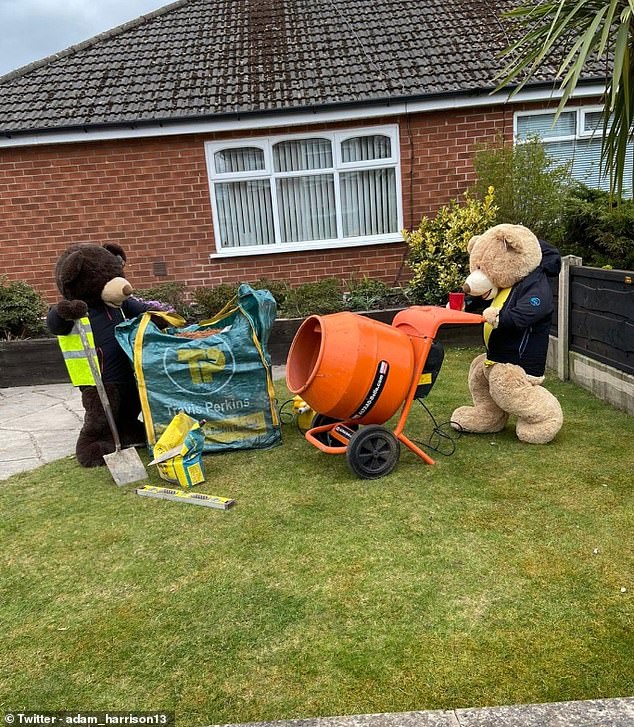 Getting busy: another day saw the two oversized bears trying their hand at a little cement mixing

UK resident Adam Harrison (@adam_harrison13) shared how his neighbours had used large toy bears to create scenes in their front garden to entertain local residents during the lock-down.

‘House near us puts these bears out each day, doing a different activity every time. It’s all I live for currently,’ he said in a tweet.

He shared a snap showing one bear busy ironing, and another mowing the lawn in a hilarious Twitter thread.

People responded, saying it had lifted their spirits: ‘Could you photograph them each day and tweet?! Very uplifting while we’re only allowed out for the “bear” necessities.’

‘British humour at its finest, following for next installment! Bravo to your neighbours,’ wrote another. 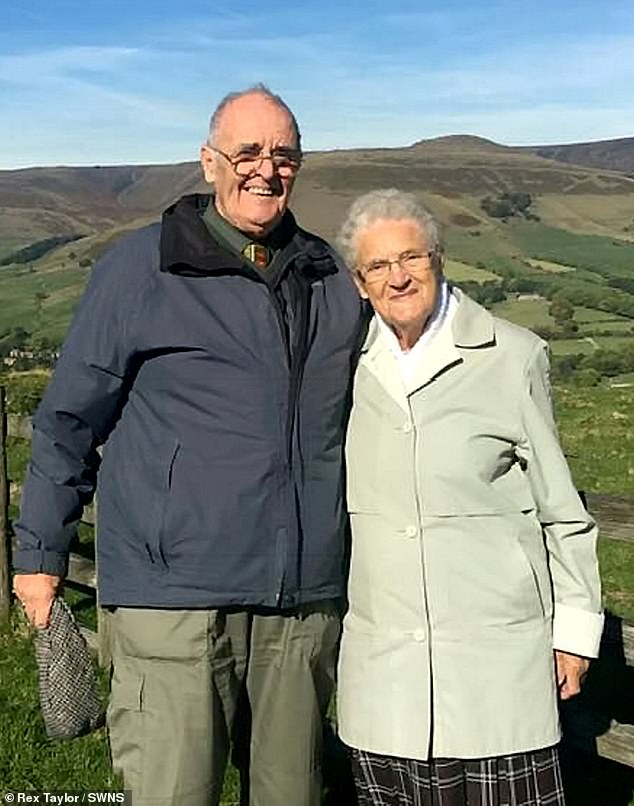 Rex Taylor, 86, from Ripley, Derbyshire, cares for his wife Selina (pictured together), 83, who has Alzheimer’s and dementia, and the pair have stayed indoors for two weeks on government advice. They’ve shared their rendition of Vera Lynn’s Will Meet Again online to huge praise

Elsewhere, an adorable couple currently in isolation have gone viral with almost 1million hits after they performed a rousing version of Vera Lynn’s We’ll Meet Again from their sofa.

Rex Taylor, 86, from Ripley, Derbyshire, cares for his wife Selina, 83, who has Alzheimer’s and dementia, and the pair have already stayed indoors for two weeks on government advice.

The couple, who have been married for 63 years, decided to cheer up their family and friends by singing a duet of Vera Lynn’s wartime hit and posting it on Facebook.

They posted the video, shot in the living room of their home on Saturday and within days it was watched and shared almost a million times. 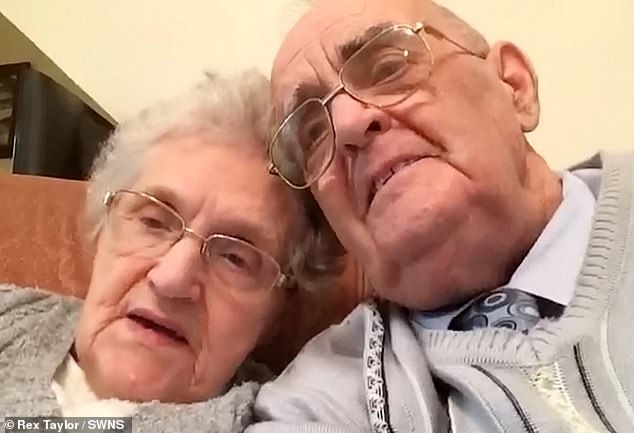 They have also been inundated with fan mail and comments of support from people across the world. Rex used to run a DIY shop with Selina before they retired in 1995 and is now caring for his wife full-time.

He said: ‘It was just a bit of fun really, we were sat here and we thought it would be nice to let people know that, it’s not easy, but we aren’t too bad.

‘We have got an Alexa and we asked it to find something and Vera Lynn’s We’ll Meet Again came up and we thought that was just perfect.

‘We will come out of this and we will be in a better place, unfortunately we will have lost people which is very sad. As long as people do what we are doing and try not to spread it, it stops people dying when they don’t need to.

‘Do as you’re told and let’s stick to it, but most importantly, keep your chin up – we are going to come out of this.’

The pair, who have three grown-up children, 11 grandchildren and six great-grandchildren, are now hoping to post duets every week.

Their son Rob Taylor, 43, an operations manager, said: ‘My mother has got Alzheimer’s and dementia and really depends on her routine, doing things at the same time every day.

‘She usually goes out to a day care centre twice a week so going into lock-down for them is particularly hard. Singing the song gives her something regular to do. 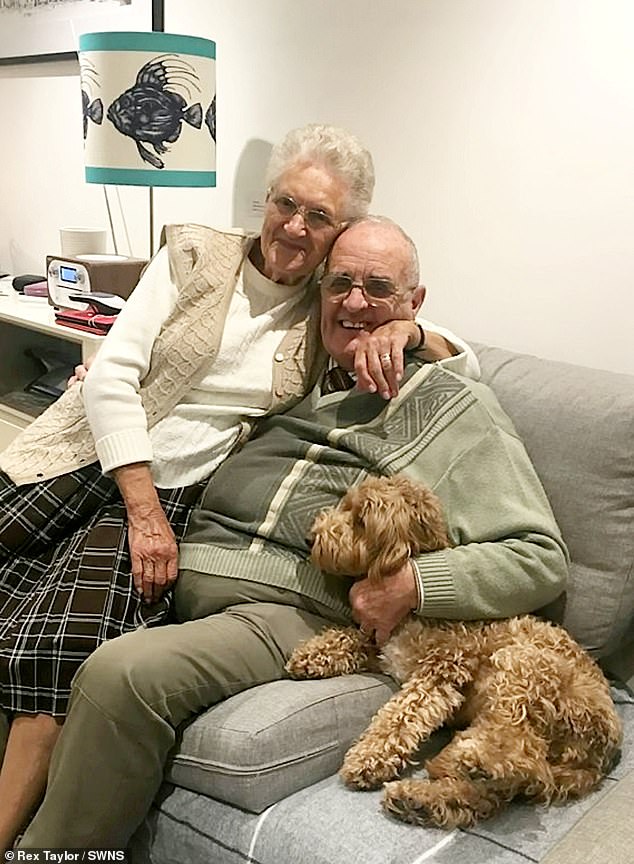 The couple (pictured), who have been married for 63 years, decided to cheer up their family and friends by singing a duet of Vera Lynn’s wartime hit and posting it on Facebook

‘It was so genuine, just a message to say we’ll get through this and see each other again. I then forwarded it to our local paper and then it’s gone absolutely wild from there.

‘They are very glad because they are church people and wanted to spread some joy at this time. It really picked up yesterday morning and views have been rising at a constant rate. It was just meant for close friends and family but now people from New Zealand and America are writing to say “That made me cry.”.

‘Mum and dad are inseparable and they have a love that we would all wish to have. They met when he gave up his seat for her on a bus and things went from there.’

FAMILY WELCOME NHS WORKER MUM WITH ROUND OF APPLAUSE 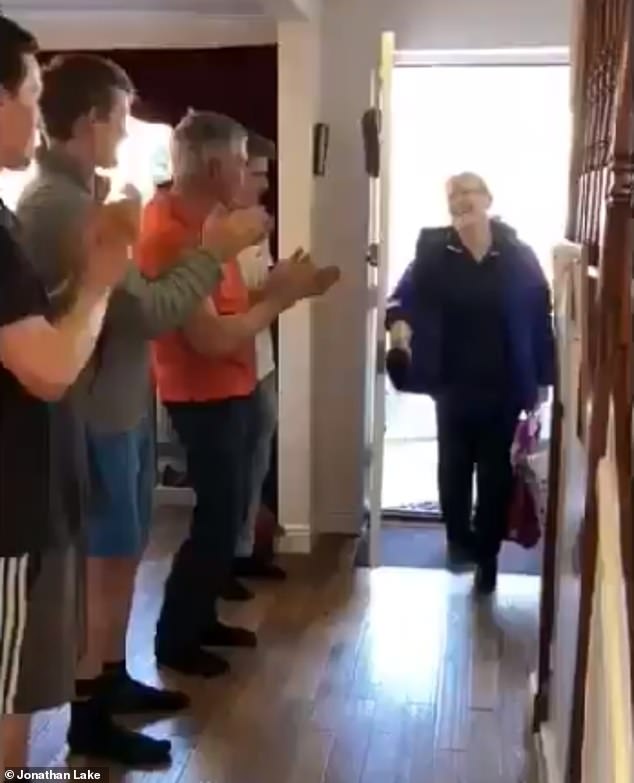 The family of a nurse, Lynn Lake, who works at a Welsh GP centre have decided to welcome her home every night with a round of applause (pictured) 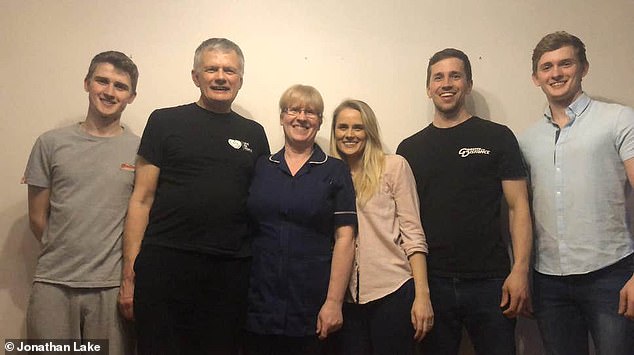 Jonathan Lake, 25, of Ewloe, Flintshire, shared a heartwarming video on Twitter of him and his family (pictured) clapping as his mother Lynne returned home from work

The family of a nurse who works at a Welsh GP centre have decided to welcome her home every night with a round of applause to show their appreciation as she helps the nation fight against the pandemic.

Jonathan Lake, 25, of Ewloe, Flintshire, shared a heartwarming video on Twitter of him and his family clapping as his mother Lynne returned home from work.

The clip captures her family lining up by the front door as they get ready to greet her with a round of applause.

Captioning the footage, Jonathan said: ‘We as a family have been welcoming our mum home from work as a hero.

‘She is a nurse in the NHS in Britain and is working so hard everyday! We will continue to do this every time she returns home from work.’ 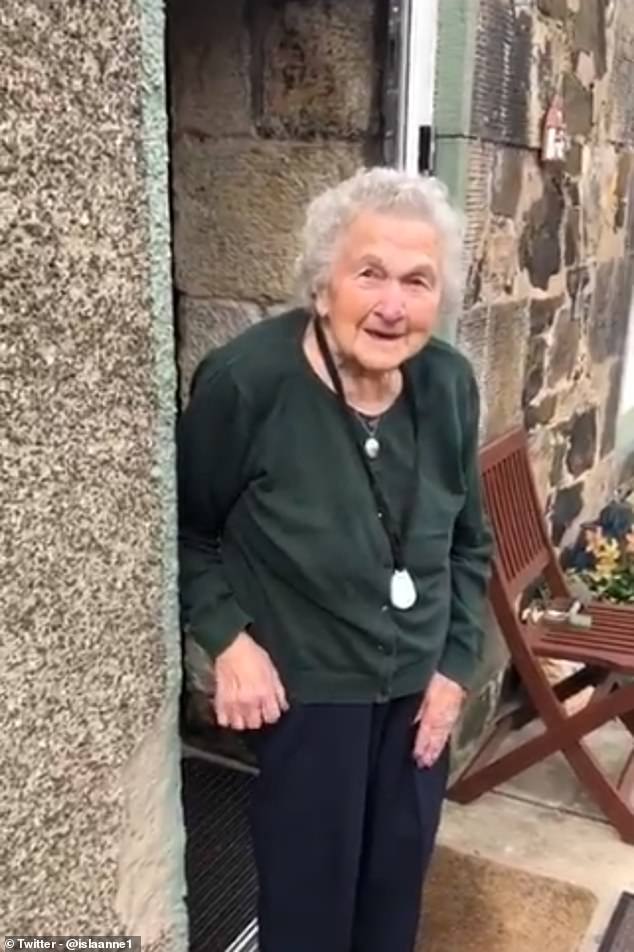 The unknown Scottish granny offered wise words of wisdom to her viewers from her doorstep, and even joked ‘I’m like a bad penny, there’s no getting rid of me!’

This heartwarming example of a stoic spirit has now been viewed more than a million times, after Twitter user @islaanne1 shared the age advice of her 93-year-old granny on social media.

During the short clip, filmed on the lady’s doorstep at her home, she tells viewers, in a thick Scottish accent: ‘Do what you’re told – Keep to the rules and you’ll all be fine. It will all pass.’

The calming words were filmed by her daughter and shared by her granddaughter, with thousands commented that it was what the nation needed in this time of uncertainty.

The elderly lady, clearly in good health and spirits, even joked: ‘I’m like a bad penny, there’s no getting rid of me!’

FREE BOOK GIVEAWAY TO KEEP OTHERS IN READING MATERIAL 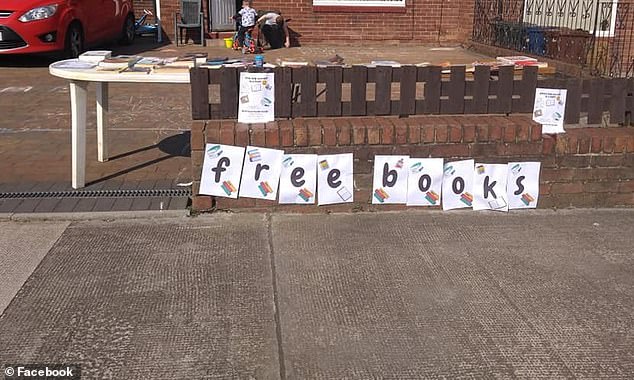 Chris Gotts, from Gosforth in Newcastle upon Tyne, decided to support his neighbours by offering them free, old books, DVDs and CDs (pictured)

Chris Gotts, from Gosforth in Newcastle upon Tyne, decided to support his neighbours by offering them free books, DVDs and CDs.

Posting on his local Facebook group, he explained: ‘Today we set up two tables at the front of our drive and have put a lot of books we no longer need for anyone who is walking past.

‘Obviously we are not asking people to come out of their way for a book but anyone who does pass by our street while out on a walk, feel free to take one home with you or even donate some books you no longer want or have use for.

‘We will be taking them in at night and putting them out the next morning. We plan to do this every day that it’s dry enough to do so until we run out of books or until the kids go back to school. ‘

The parent added: ‘Please respect social distancing if you do stop by to take a look.’

He later explained that he would be placing the books in carrier bags for 24 hours before putting them back out, after being told by neighbours that the coronavirus can live on surfaces for hours, and even days.