Strap in and expect some extravagant circle work around the backblocks.

The country party suddenly has a tearaway named Barnaby at the driving wheel – again. 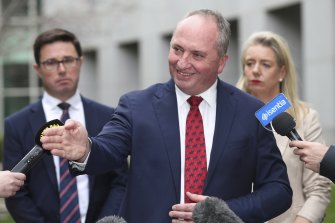 Barnaby Joyce has returned to the leadership of the Nationals.Credit:Alex Ellinghausen

You’d almost forgive Scott Morrison, stuck in quarantine at The Lodge while watching the Nationals swerve back to the future, if he were to ponder that he didn’t sink enough beers while traipsing Cornwall in search of his convict ancestry.

Morrison must, among other challenges, try to digest the idea that his new deputy prime minister is a bloke who filmed a 2019 Christmas message to the world declaring he was “just sick of the government being in my life”, while musing, in relationship to climate change, that “there’s a higher authority that’s beyond our comprehension and right up there in the sky”.

There was some inevitability about this latest turn of events, of course.

The Nationals could hardly be expected to continue with an anonymous leader named Michael Whatsisname, even if, in his recent role as Acting Prime Minister while Morrison was abroad on his journey of the heart, he tried to give himself a profile by producing the exotic idea of sooling the bush’s mouse plague on city dwellers.

In the end, Sky Pilot Barnaby needed only be seen as more likely than the unfortunate Whatsisname to harass Morrison over any further sign that a 2050 date with net zero carbon emissions might become Coalition policy, whatever Boris Johnson might think.

And sure enough, in a hopelessly divided country party that has all but redefined farms as paddocks waiting to be dug up by miners, Barnaby was handed his wish of returning to the leadership he lost three years ago after a spot of personal and complicated circle work involving his own love life.

Leadership challenges, however, are the sort of thing that Nationals with a memory – and you wouldn’t need more than the fingers on a sawmiller’s hand to count them these days – learned long ago were best avoided.

You could end up getting what you voted for.

Back in the party’s distant – very distant – glory days, leadership was settled by tough blokes, always blokes, over a barbecue of mutton chops and Hereford steaks and sealed with long-neck beers at a country bowls club. In this way, Artie Fadden, Black Jack McEwen and Doug Anthony clocked up a total of more than 43 years as successive Country Party leaders.

He was a city boy who’d pretty clearly never seen a mutton chop.

With his economics degree, Blunt felt he was The Future, and persuaded a majority of his befuddled colleagues to go along with him.

His moment came when the Liberals went through their latest ruction of the 1980s and tossed aside John Howard as leader in favour of Andrew Peacock.

Blunt and his people persuaded The Nationals that they should get in on the act, and won a challenge to the old warhorse Ian Sinclair, successor to Doug Anthony, without so much as a beer in a bowls club.

Until Barnaby’s triumph on Monday, Blunt’s was the only successful challenge to a sitting leader in the Nationals’ post-war history.

Blunt lost his own seat at the next election.

Now Barnaby, who doesn’t want the government in his life, is the New Future for the Nationals. Buckle up.