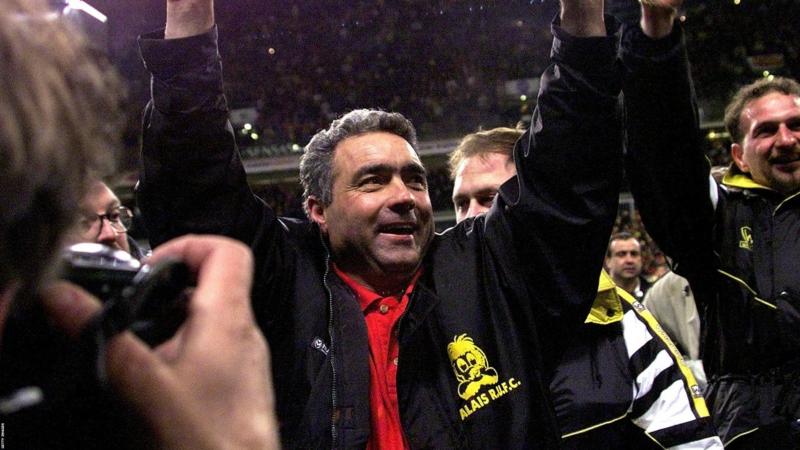 The French word epopee is a tricky one to translate directly into English, but it essentially means epic or saga, as in the poetic narrative of people performing extraordinary deeds to overcome insurmountable odds.

In French football, it is a word synonymous with one club: Calais Racing Union.

To fully understand why, we must go back 20 years to the 1999-2000 season and one of the single greatest cup runs in sport.

Football history is replete with Cinderella stories but a special romance is reserved for the fairytale cup adventure of a lower-league side.

In England we have the FA Cup exploits of the likes of Chesterfield, Wycombe and Lincoln City. In Spain, Castilla’s run to meet parent club Real Madrid in the 1980 final is enshrined in Copa del Rey folklore. While in Italy, there are the respective achievements of then third-tier sides Bari and Alessandria in reaching the Coppa Italia semi-finals.

In France, though, they have a story to top them all – that of the amateur fourth-tier team comprised of shopkeepers, teachers and labourers whose remarkable and unprecedented journey to the French Cup final and a showdown with holders and then seven-time national champions Nantes gripped the whole nation.

As in most epic tales, though, the journey matters more than the goal.

An escape from reality

When Calais began their 1999-2000 cup campaign, with a tie against Campagne les Hesdin, glory in the Stade de France was the furthest thing from the minds of their players and fans.

On the pitch, 11 games and all of the country’s professional sides stood between them and an unthinkable final. Off it, there were even more pressing issues at hand. 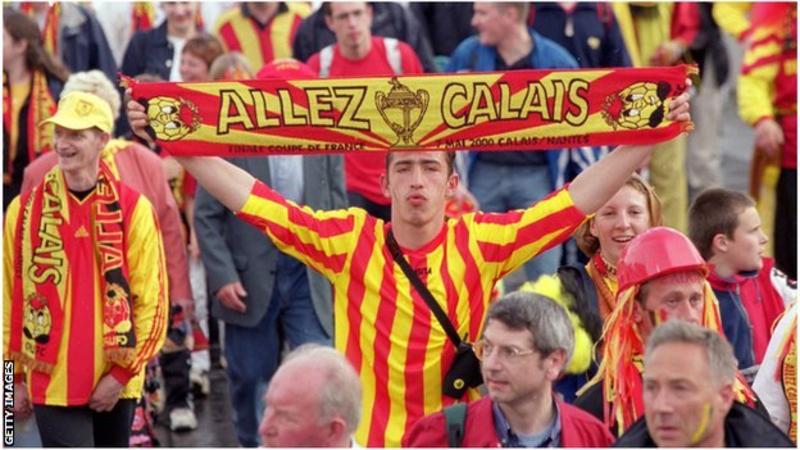 The northern port town of Calais was then, and remains now, one of the most economically challenged in France. At the turn of the century, unemployment was at nearly 17%, with almost half of its 75,000 inhabitants earning less than £5,000 a year.

As an amateur organisation, Calais Racing Union and its players were not immune to the economic hardship. The year before, the club had lost in the region of £200,000.

Most of those who turned out regularly for the side received no money in return, instead relying entirely on mainly low-paid jobs for their livelihood.

Defender Jocelyn Merlen and winger Mickael Gerard sold alcohol to English day-trippers in a local cash and carry, midfielder Gregory Lefebvre was a camp attendant, Stephane Canu a gardener and star player Emmanuel Vasseur an electrician on trains in the Channel Tunnel.

Their manager, Ladislas Lozano, who had fled Spain with his family as a child to escape the Franco regime, was a council foreman responsible for tending to the area’s sporting facilities.

But every successive cup win that season brought football and its emotional and financial rewards to the foreground and enabled players and fans alike to briefly forget about day-to-day hardships.

Four fellow amateur sides and one semi-professional outfit (Dunkerque) were dispatched en route to the round of 32 and a clash with their first fully professional opponent, Lille, then a Ligue 2 side.

The gulf in ability between divisions is much smaller in France than it is in England. There is also a structural advantage for underdogs in the French Cup, which sees any side two tiers lower than their opponent automatically handed a home tie. Even so, few gave Calais a prayer.

But a 1-1 draw at their tiny Stade Julien-Denis was followed by a stunning 7-6 penalty shootout win.

And the victories kept on coming. After seeing off fifth-tier Langnon-Castets 3-0, they beat another Ligue 2 side, Cannes, again on penalties – which brought each of their players a huge £2,000 bonus and firmly into the public limelight.

If that win caused waves, the next, against Ligue 1 Strasbourg, prompted a tsunami of public recognition. Technically a home draw, the tie was played in Lens because Calais’ 2,100-capacity stadium – usually home to 300 staunch fans on a weekend – was too small.

The now swollen travelling Calais support required 250 buses to take them the 65 miles to the game, won 2-1 thanks to goals from social worker Christophe Hogard and shopkeeper Merlen.

The day after, Lozano was given a standing ovation by fellow diners as he ate at the historic restaurant Fouquet’s, on the Champs-Elysees in Paris.

Lozano and his team weren’t done yet, though. The semi-finals brought them up against Bordeaux, the reigning French champions, a side full of internationals – Christophe Dugarry, Lilian Laslandes, Johan Micoud and Sylvain Legwinski to name a few.

Again played in Lens, with 40,000 of their fans travelling to support them both inside and outside the stadium, Calais won 3-1 in extra time. 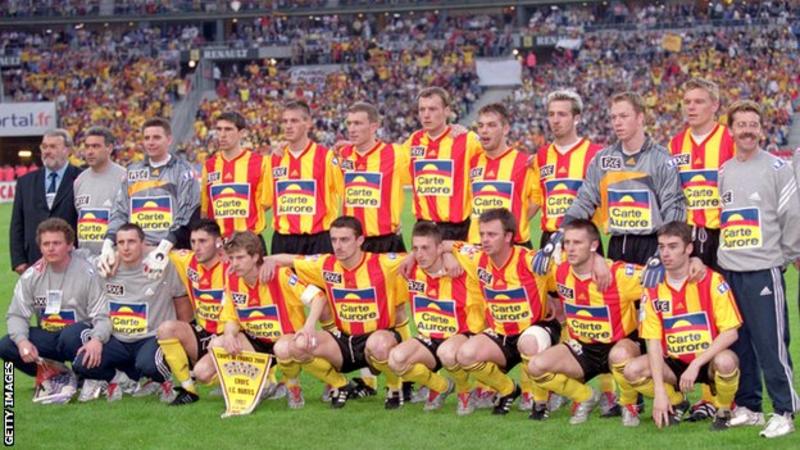 The town went wild, the players received £10,000 each for their efforts and Lozano suffered a minor heart attack in the aftermath, resulting in three days in hospital, during which he received a get-well phone call from president Jacques Chirac.

In the build-up to the final “Calais-mania” gripped France – its TV channels, newspapers, bars and cafes were awash with talk of the “sang et ors” (Blood and Golds). “All of France behind Calais!” declared Le Parisien.

Unfortunately, not all of Calais could secure access to their side’s greatest moment. Far from it. The club received 50,000 applications for tickets for the final, but were allocated just 19,300 of the Stade de France’s 80,000 seats.

Many went to Paris anyway, just to be near to the event and soak up its magic.

For 49 glorious minutes on 7 May 2000, the fairytale story appeared as though it was going to get its perfect ending, thanks to Jerome Dutitre’s 34th-minute opening goal.

However, reality came crashing back in, in the shape of two Nantes goals – both scored by future Manchester City, Newcastle and Wigan midfielder Antoine Sibierski, the second a cruel 90th-minute game-winning penalty. 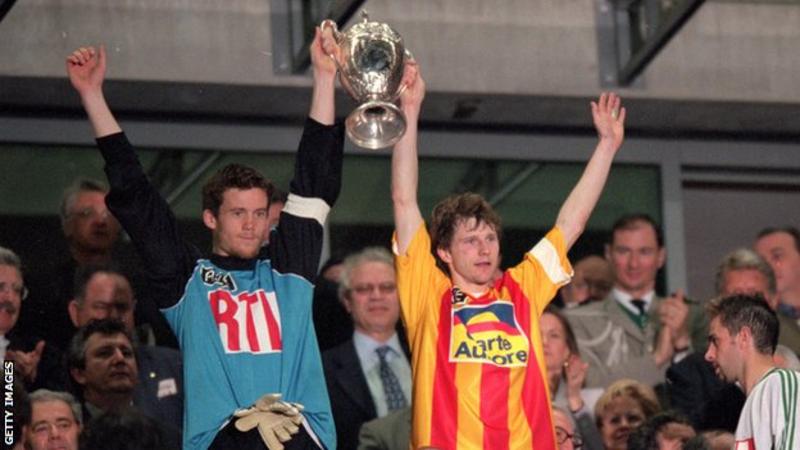 Losers within the 90 minutes, Calais were victors in a much broader sense.

“Mr Chirac told us that there is a sport winner and a moral winner. He told us that Calais was the real winner,” the coach revealed afterwards.

Nantes would win the French title the following season but 2000 would remain Calais’ high point. They would embark on another cup run in 2006, reaching the quarter-finals, but then fell into prolonged financial problems that eventually led to the club’s liquidation in 2017.

They live on, though, in French football folklore, as a symbol of defying the odds.

Their cup run was voted as the best of all time by France Football magazine readers in 2017, while this year a replay of the 2000 final, featuring players who featured from both clubs, was planned until the coronavirus pandemic intervened.

Many other clubs have followed in Calais’ footsteps, establishing the Coupe de France as one of the most unpredictable and entertaining domestic cup competitions in Europe, while others, including the FA Cup in England, continue to have their lustre questioned.

Third-tier Amiens (2001) made it to the Coupe de France final the year after Calais, while Dijon (2004), Nimes (2005) and Gazelec Ajaccio (2011) have all reached the last four since the turn of the century. Les Herbiers and Chambly, also third-tier sides, played each other in the semis in 2018, with the former going on to lose to Paris St-Germain in the final.

To top that, fourth-tier amateurs Quevilly reached the same stage in 2010 and then went one better in 2012, making it to the final, where they were beaten by Lyon.

More importantly, the club remains an aspirational example for their troubled city.

As Lozano said in an interview with French football news site sofoot.com this year, following his appointment to Calais’ municipal council: “The six years spent at the club affected me, but also the mentality of the locals, their way of fighting, going beyond their limits, rejecting adversity. Calais is forging characters.”

Even 20 years on, the legacy of the club’s now legendary achievement lives on in the city, both in memories and mortar.

This year, an exhibition of the letters and faxes sent to Lozano by fans during the cup run was inundated with visitors.

The city’s football stadium, built in 2008, home to Racing Union for its final nine years and now the residence of spiritual successor Grand Calais Pascal FC bears a grand but fitting title: the Stade de l’Epopee.