The government will lobby China through international forums to enforce its ban on the trade in wild animal meat.

Assistant Minister for Multicultural Affairs Jason Wood said it was an "absolute no-brainer" to close down Asian wet markets because of "barbaric cruelty to wildlife" and major health risks. 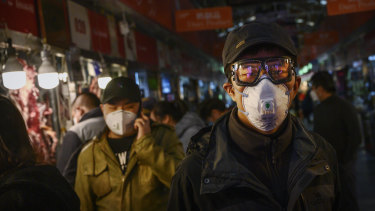 A Chinese shopper wears a mask at a Beijing market.Credit:Getty Images

He said wet markets were a proven health risk, citing the World Health Organisation, and many practised acts of animal cruelty.

"What we have seen around the world, people tragically dying, families not being able to give their loved ones funerals. It has been a terrible time," Mr Wood said.

"Wet markets have been the origin of viruses such as SARS and more than likely COVID-19. We need to protect human lives and crack down on the incredible cruelty to wildlife that occurs in these places."

'We need to protect human lives and crack down on the incredibly cruelty to wildlife that occurs in these places.'

Prime Minister Scott Morrison said on Friday that Australia had "to be quite strident" through international bodies, including the World Health Organisation, to deal with the "quite serious world health risks" of wet markets.

The markets are common across much of Asia and home to small stall holders who sell fresh produce, seafood and the same meats found in Western butcher shops. Some also sell meat from wild animals that are stored live before being killed.

Mr Wood was among the first Coalition MPs to condemn live animal trade at wet markets last month and has faced calls for his resignation from Labor over what one MP labelled as "fear mongering".

Labor's spokesperson on multicultural affairs Andrew Giles said at the time Mr Wood should be working to “unite Australians” and that the remarks were inappropriate, offensive and could undermine public health efforts. 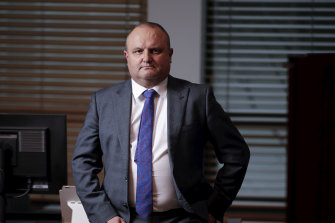 Mr Wood said many of the initial sufferers of the virus were reported to have worked in live animal markets in Wuhan.

He said the practices of wet markets should be "condemned" and live animal trading shut down.

"I have been a voice for wildlife whether here or across the world, and I will not be called a racist for condemning wet markets, whether it be in China, in Wuhan or anywhere else."

"That will backfire, people will resent it," Professor Cao said. "Most people are legitimately going to go and buy fresh produce."

Wet markets play an important role in giving locals access to fresh food in a similar way to farmers' markets in Australia, said Professor Cao, who is an advocate of the ban on wild animal meat.

The Chinese government is still considering exactly which animals are "wild" and ought to be banned but some cities and provinces are already implementing their own bans, including Shenzhen, a city near Hong Kong, which enacted its ban on Friday. The ban also extends to the consumption of cats and dogs.

Professor Cao cautioned that even with a ban, the main issue was enforcement.

"China's existing wildlife protection laws are most often not enforced," she said.

Deputy Chief Medical Officer Paul Kelly said while wet markets with wildlife posed a risk of sparking new viruses, shutting them would not help with COVID-19.

"In terms of this particular virus, COVID-19, really that jump from animals to humans has already occurred, so the risk is really in large numbers of humans coming together rather than markets at this point," Dr Kelly said.