Cat burglar has a quite literal meaning in one Oregon neighborhood.

A warning sign put up by Beaverton resident Kate Felmet says this much, and it has gone viral for outing her pet’s sticky paws. According to a report from Today, the 50-year-old’s cat Esme has been snatching small items in their neighborhood for some time now.

Right next to a clothing line filled with various clothing accessories, Felmet’s yard sign shows an artistic illustration of her black-furred and yellow-eyed cat holding a glove in its mouth. In red font, the sign reads: “My cat is a thief: Please take these items if they are yours.”

Felmet told Today that her sign has been up for more than a month and has helped neighbors locate missing items, including gloves, face masks, kneepads, tools and more.

“As she brings things, she comes to the back door and she yells and it’s like ‘I brought you something,’” Felmet explained to Today.

Since setting up the display, possessions have slowly returned to their rightful owners.

While Esme’s burgling spree has been entertaining for the neighborhood, Felmet told Insider that the cat has been a repeat offender and it can make interactions with her neighbors “awkward.” For example, Esme has reportedly taken kneepads from a family’s garage three times already. 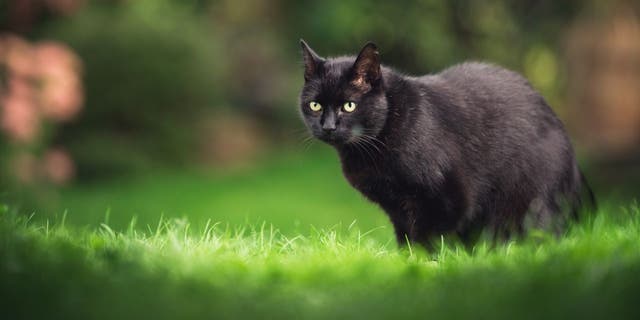 A cat named Esme (not pictured) has been taking random items from neighbors’ homes in Beaverton, Oregon, according to her owner Kate Felmet. (iStock)

Esme’s behavior isn’t all that unusual, according to a report from Vetstreet.com, a website that provides pet care advice from veterinarians, trainers and experts.

Apparently cats may “steal things” if they want attention or playtime. Cats might also take items stealthily if they’ve been shown that they’ll be reprimanded for doing so, according to the pet website. Pet owners who want to curb this type of behavior may be able to if they invest in puzzle toys for their cat to keep them “mentally and physically engaged.”

Meanwhile, social media users have been sharing Felmet and Esme’s story with anecdotes of their own.

“My cat would do the same if I let him out,” one Twitter user shared on Monday. “Now he just takes my stuff and hides it.”

“[This is] a rather unconventional way of shaming,” another user tweeted.