Cats? What’s that? How a mystery caller changed everything for the men behind Les Mis

You can never know, says Alain Boublil, when a song you have written as part of a musical is going to become popular, still less an anthem. “One day, the world outside decides, through one specific singer who comes on television and sings I Dreamed a Dream on a crazy TV show, that you have written something that is worth having a life outside the show,” he muses. “And now, suddenly, Do You Hear the People Sing? has become the anthem of so many revolutions in the world and it is sung in the streets. Sometimes we don’t even know why or how. We just see it on the television.”

Both songs come, of course, from Les Miserables, the epic musical the librettist adapted from Victor Hugo’s 1862 novel with composer Claude-Michel Schoenberg. Originally written in French, it had closed in Paris after a successful but limited season three years before impresario Cameron Mackintosh heard a recording of it, called Boublil and told him that while he might not know it, he had written “something very exceptional”. Boublil didn’t know who this person on the other end of the line was. Mackintosh explained himself by saying he had produced Cats. Boublil hadn’t heard of that, either: his creative beacons were shows from the previous generation of musical theatre, such as West Side Story and Oliver!.

Nevertheless, this conversation was the start of a commercial phenomenon. Les Mis, as it is now universally known, had its premiere in London in 1985 and has been playing around the world ever since.

Miss Saigon, which took the story of Puccini’s 1904 opera Madame Butterfly and reset it during the Vietnam War, opened in 1989. It, too, was a smash hit. Taken together, these two musical theatre colossi helped define ’80s culture. They have both been translated into 22 languages, says Schoenberg. Maybe 23; he is not sure.

When their next musical came out seven years later, also with Mackintosh’s backing, everyone expected a hat trick. Martin Guerre, inspired by the film featuring Gerard Depardieu and exhaustive research into the true story of a 16th-century identity theft, was a similar mix of heartbreaking personal drama, a background of social upheaval, spectacle and rousing music. For whatever reason, it never hit the same heights, despite winning an Olivier award. It played in London for a couple of years. Critics speculated that the musical and its audience had moved on; the composers felt they just never got it right. 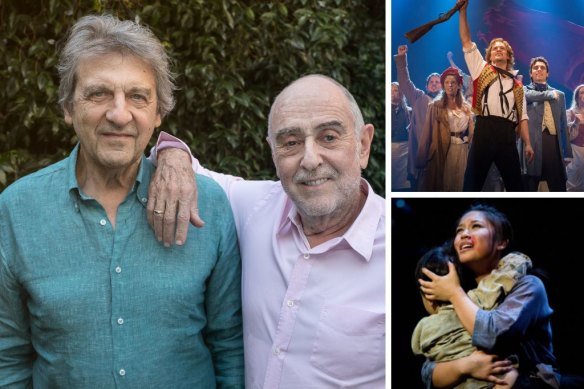 They returned to it during lockdown. “Maybe because of this period, when you have to do something and can do nothing else, we started having new ideas,” says Schoenberg. “Or maybe because we got older, I don’t know. Anyway, we have been rewriting very extensively.” Plans are afoot to relaunch it in London in 2024 “in a very prestigious theatre”, as Schoenberg puts it, but without Mackintosh.

“I must add he very graciously gave us back the rights,” says Boublil. “Maybe by giving us that new freedom, we also felt able to look into ourselves and find new possibilities. Claude-Michel has come up with some unexpected music that would not have been in Martin Guerre 15 years ago and I have come up with, I hope, some new psychology and new ideas.” He has also started working with another young librettist from Australia, Paul Hodge, who wrote Clinton: The Musical and initially approached Boublil with a request that he mentor him. Boublil says he has helped with the rewrite.

This process of revision, rethinking and constant exchange of ideas is very much the Boublil-Schoenberg method. When we speak on Zoom, Boublil is on holiday in Tuscany and Schoenberg is at his home in the south of France. They are often on different continents. Nevertheless, they speak most days. Speaking to me, they finish each other’s sentences. Boublil is 81, Schoenberg is 78. They have been swapping ideas – or telling each other that the music or lyrics are not good enough, with the frankness of intimacy – for more than 50 years. 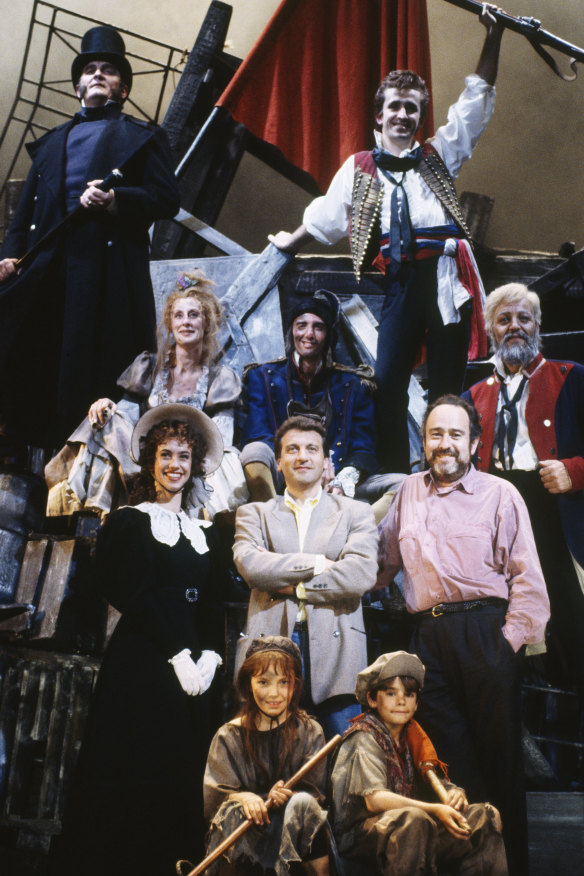 Alain Boublil and Claude-Michel Schoenberg with cast members from an early production of Les Miserables.Credit:Getty Images

When they agree to pursue something new, they read the source text repeatedly and talk endlessly. “Eventually, we start to write a kind of book,” say Schoenberg. “We don’t write what people are saying. We write what they are doing. Then I start to make a melody describing what we have been writing because I want the music to describe what is happening on stage with no lyrics.” Boublil matches his lyrics to the music. Then they go back and forth. “It is a non-stop process but at some point, we have to be in the same room.”

That process is foregrounded in the concert they are presenting in Australia. It is a collection of hits from the musicals that worked so marvellously and favourite songs from shows – such as The Pirate Queen – that failed. All the singers are veterans of one or other of the shows. Boublil and Schoenberg share a deep belief in the importance of a company dynamic, that the people on stage are not just ambling about to no purpose, but feeling, for example, like comrades burning with revolutionary fire.

Anyone seeing Les Mis in 2022 will be part of an audience largely of fans; part of the thrill is a sense of joyous togetherness. Plenty of people know all the words and sing along. “But this sense of coming in and sharing an emotion, it is coming from the stage, too,” says Schoenberg. “Each time the show is well done, it is because we managed to have the feeling of a very solid group in front of you, telling the audience its own story.” He and Boublil want the spirit of those companies to be part of this composite show, too.

The concert isn’t just about having a rollicking wallow in nostalgia, however. They also want to give an insight into how the shows are made. “We made several of these concerts in the United States first, then China, very successfully,” says Boublil. “The idea was to try to discover how the songs were written, how the songs were developed, how some songs were abandoned and at the end, more or less, how the musical – or at least our musicals – are written, which for us is mostly rewritten endlessly over the years.

“It was really a kind of visit inside the process of creating a musical like Les Miserables or Miss Saigon – and, before that, The French Revolution, which was our first foray into musical theatre and was called ‘the first French rock opera’ at the time.” Martin Guerre and The Pirate Queen, which fizzled quickly after it opened in 2006, are included. “All this makes, I think, quite an unusual evening for a concert.”

What stands out, however, is that the shows – like Victor Hugo’s novel – are about something other than two people’s yearning or a kid from the flyover states trying to get a job in a New York chorus. “Of course, there is a background of political ideas,” says Schoenberg. “We are not preachers, but we are always inspired by strong background. Even if working with a story of simple people, those people are completely destroyed and shattered by the big background.

“And for us there is no other way. We can only express ourselves through music and dialogue, and we like dealing with these kinds of subjects.” Perhaps they will change some people’s minds. Songs can be powerful; that’s why Do You Hear the People Sing? is banned in China. “That’s a compliment for us,” says Schoenberg. “It’s not bad news,” says Boublil. “It’s good news.” It means that, like them, the song is doing its work.

Do You Hear the People Sing? is at Hamer Hall, Arts Centre Melbourne, September 27-28, and Sydney Opera House, September 30-October 2.