The opposition has called for an immediate freeze on pay increases for Victorian politicians after a wave of hefty salary boosts for MPs landed in the midst of a national economic crisis.

Labor parliamentarians on Thursday pledged to donate their increases to coronavirus-related causes as the second part of an 11.8 per cent pay increase for the Premier, Opposition Leader and their frontbenchers took effect.

The donation pledge did little to quell angry reactions from some unions and a prominent unemployment advocate, who branded the pay rise "disgraceful".

“We will support legislation coming through the Parliament to freeze the pays of members of Parliament,” Mr Battin said on Friday.

“Daniel Andrews, make sure that … we don’t get any gain out of this crisis.” 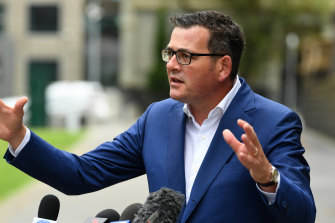 Victorian Premier Daniel Andrew on Thursday announced the pay rise would be donated.Credit:AAP

MPs' salaries – and pay rises – are set by an independent remuneration tribunal and can only be knocked back by passing legislation through Parliament.

The Premier, Opposition Leader and ministers are expecting a 4.8 per cent raise from July, having received a 7 per cent boost in September last year. Backbenchers received 3.5 per cent pay rises in September.

The government has not said where Labor MPs will donate their extra pay.

“All government MPs will make donations to COVID-19-related causes equivalent to the uplift in their take-home pay from 1 July 2020 to 30 June 2021,” a government spokeswoman said.

When asked what the Opposition would do with their pay rises if the government did not agree to recalling Parliament, Mr Battin said: “Our only position is freeze the pays and stop members of Parliament getting a pay rise when the rest of Victoria is hurting.”

Unemployment advocate Jeremy Poxon said the Australian Unemployed Workers' Union had been "absolutely smashed" with requests for assistance as the economic shutdown continues to cause job losses across the state.

"It's disgraceful that politicians continue to enjoy regular wage increases while for almost 26 years there was no increase to Newstart," he said.

"It is an extraordinary level of inequality that exists when elected officials continue to live in comfort while much of the population is left to starve.

"The disparity is enormous. It's wild to us that more people aren't outraged by it.

"I call for [Victorian government MPs] to give their pay increases to housing services. To make sure the food bank can cope and make sure other services like the Father Bob Foundation can keep delivering."

"It's fine for the MPs to donate their pay rises, but we are much more concerned about workers in local government getting a wage, let alone a wage rise, particularly the casuals and the part-time workers across some councils who are facing standdowns.

"We want to see some leadership on that issue."

Lisa Fitzpatrick, state secretary of the Victorian Nursing and Midwifery Federation, said her union thinks "the Premier is worth every cent" of his pay rise and praised the government for improving nurse and midwife patient ratios.

"Strong leadership is rare … Premier Daniel Andrews has steered this state through the recent bushfire disaster and is now leading us through the unprecedented COVID-19 pandemic."

The union's EBA expired on March 31, with negotiations for a new one ongoing.

Victoria’s police negotiated a pay rise of between 2 and 3 per cent in their EBA in December, while last month the paramedics' union agreed to a 2 per cent annual pay rise.

The Australian Education Union is currently negotiating its early childhood sector EBA and is due to begin discussions on a new agreement for schools – which usually lasts three to four years – in August.