I still struggle to believe someone will love me: From TV star Charlie Webster, a brave and harrowing account of the physical and emotional abuse she suffered at the hands of her stepfather

The violence was arbitrary, brutal, terrifying; but it was her stepfather’s constant, insidious undermining of her self-worth that had the most lasting effect on broadcaster and campaigner Charlie Webster.

She was 14 when, in a spittle-flecked rage, he hit her, repeatedly and fiercely for an imagined misdemeanour, until she collapsed on to the ground.

‘He’d been drinking. That did not make him an abuser, but it accentuated the abuse and made him even more unpredictable,’ she recalls.

‘He said I was late home. I wasn’t — I never put a foot wrong because I was paranoid and trying so hard to manage his behaviour — but he punched me to the floor. He wouldn’t get off me and kept hitting me. 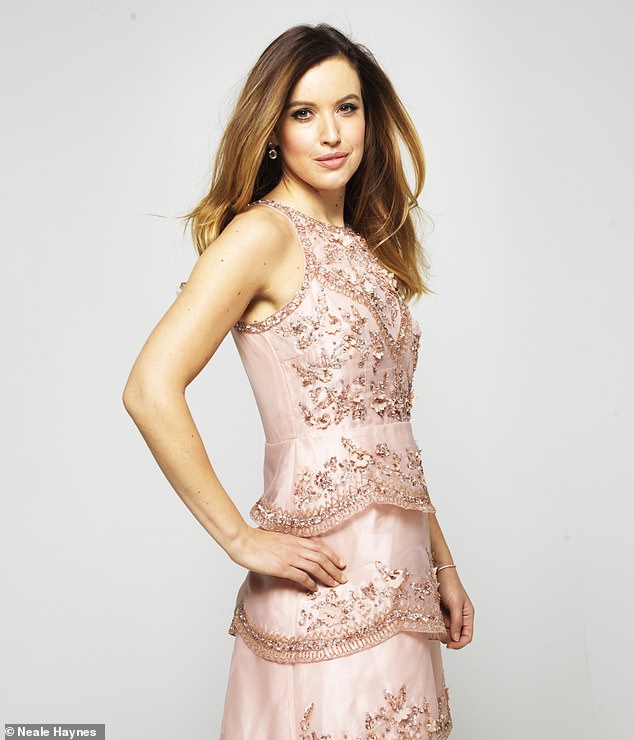 Charlie Webster, 38, (pictured) from Sheffield, revealed how the years of abuse she experienced at the hands of her stepfather has impacted her relationships

‘He was frothing at the mouth, out of control. Mum was screaming at him, trying to get him off me but he just carried on.

‘And what affected me so much wasn’t the physical pain. I was used to that; my boundaries were so skewed that I could withstand that because it was normal, but I just remember the pain in my mum’s eyes. That haunts me to this day. And my little brother was there and he was terrified.

‘In the end, it took another grown man to pull him off and what scared me was that I’d cause the family to break up.

My stepfather manipulated my three younger brothers in different ways, but he absolutely despised me because I was there with Mum before he came along.’

‘And I blamed myself for what was happening to all of them because I was the eldest, the protector.’

Charlie, who met Ian when she was a Sky Sports presenter, had a key role in the programme, both as expert adviser and fellow survivor: ‘Ian said I was the first person he’d spoken to who’d had a similar childhood and he felt he could open up to me and that I understood.

‘We spent hours discussing the long-term impacts and I helped him accept he was a victim and a child who’d had no choice in this — something he and all survivors (including myself) wrestle with.’ 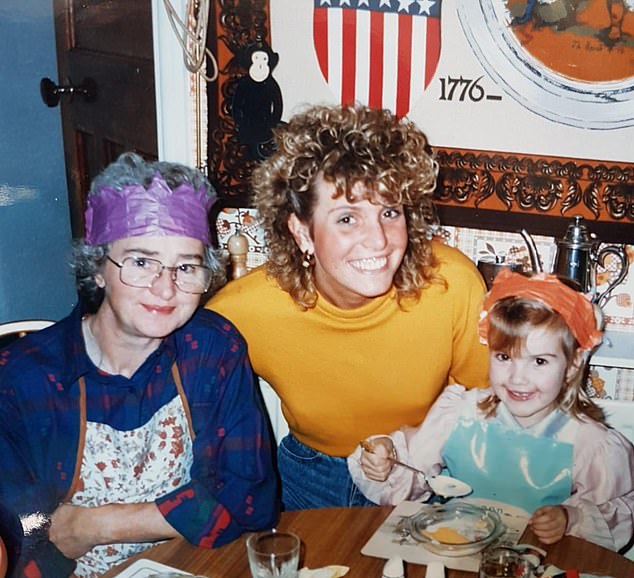 Charlie said she stopped crying because she realised it would provoke her stepfather and still finds it hard to cry now. Pictured: Charlie celebrates Christmas with her loving mother and grandmother before the abuse began

Charlie was on a family holiday when her stepfather’s most brutal assault came, but she was, by then, inured to his physical cruelty. ‘I was a master of survival,’ she says. ‘I realised crying provoked him more so I stopped crying. I find it hard to cry even now.

‘He chipped away at my self-esteem every day until it became ingrained in my psyche that I was worthless. It had a profound effect on my mental health.

‘He called me “thingy” and said I wouldn’t amount to much. He used the same sort of words to describe my mum.’

It is hard to see Charlie — vivacious, articulate, confident; an impassioned advocate for abused children and a member of the Ministry of Justice Victims’ Panel since 2014 — as that cowed child.

Thanks in part to her campaigning, the Domestic Abuse Bill, which became law last month, acknowledges the effect on children of living in abusive homes.

‘A child who sees or hears domestic abuse is a victim, not merely a “witness” or “bystander”,’ she says. ‘They live in fear every day.

‘I fought for years to get children heard and recognised as victims. I couldn’t understand why this wasn’t a priority — early intervention is how we are going to stop domestic abuse and break the cycle — yet when I advised on how to do this I was the only one who even mentioned children.’

Charlie has a mane of glossy, dark hair; her poise and elegance seems innate. But, she says, the bleak legacy of her childhood retains a grip on her adult life and has overshadowed her relationships. 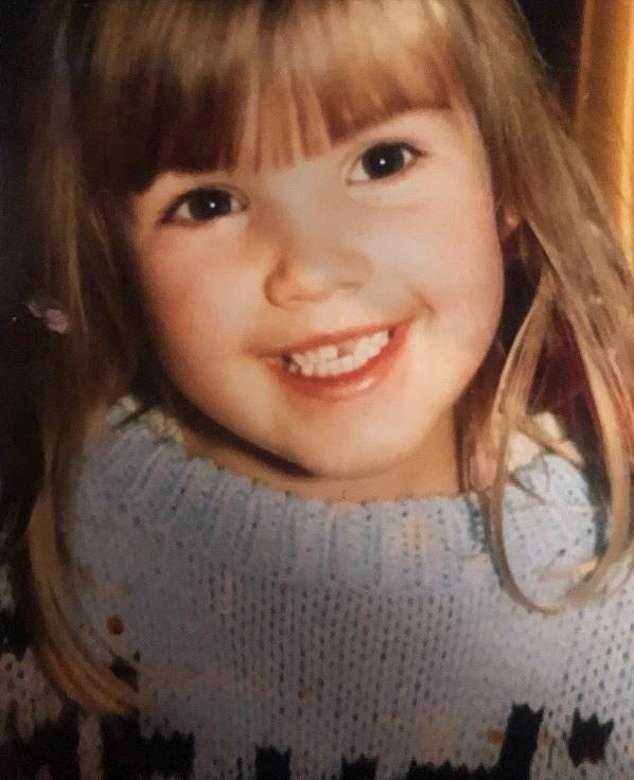 Charlie said she could see her mother’s subservient behaviour in herself, while enduring an abusive relationship herself for a year. Pictured: As a child, before the abuse began

Although confident she will find a loving partner, she remains single and endured an abusive relationship herself for a year.

‘I remember him punching a wall in my house and it shocked me that I cried and pleaded with him. I could see my mum’s subservient behaviour in myself.’

This, she insists, is why it is vital that child victims receive support as a priority.

How, otherwise, are they expected to recognise a healthy relationship as adults?

She says: ‘I’ve had to learn boundaries that I never learnt as a child and work to understand what a healthy relationship is.

‘Lack of self-worth plays a big part: when we don’t feel worthy, we can play out self-destructive behaviours and sabotage ourselves.

‘We learn patterns of behaviour as children from our parents. I saw a male as being the controller; anger to me meant violence and fear and women were controlled. If my mum spoke up she would be degraded — this is what I learnt.’

She adds: ‘Relationships were very scary for me. They were controlling and repressive. I didn’t want to risk being controlled, getting hurt. I assumed I would be, so I felt safer on my own.’ 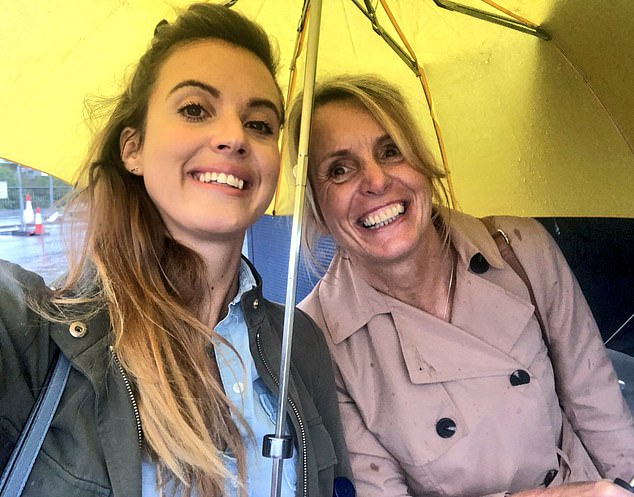 Charlie’s mother Joy, who had three sons with her stepfather, was lured in with kind words and flattery. Pictured: Charlie and Joy

Charlie’s mum Joy, now 54, was just 16 when her only daughter was born in Sheffield. Joy quickly found herself a single mum and juggling low-paid jobs in supermarkets, as a cleaner and in children’s nurseries.

‘Mum was amazing,’ says Charlie. ‘She worked so hard to put food on the table. We lived in so many places before my stepfather came along when I was seven.’

Her stepfather, whom we cannot name, lured Joy in with kind words and flattery: ‘He seemed like a knight in shining armour. But he was actually calculating and controlling.’ Charlie’s mum went on to have three sons with him. ‘To begin with, his possessiveness seemed like adoration.

‘He’d say, “Don’t go and see your friends. It’s just you and me tonight.” ’ But soon he started to show his true colours and the abuse — towards mother and daughter — began.

‘If my mum was nice to me he’d abuse her. It became a cycle of fear. I was always in a state of hyper-vigilance. If he slammed the door I worried; if he was quiet I was also worried as I didn’t know where he was in the house.

‘The abuse took the form of intimidation. He’d bang his fist on the table, spit, stab knives into surfaces close to our hands. 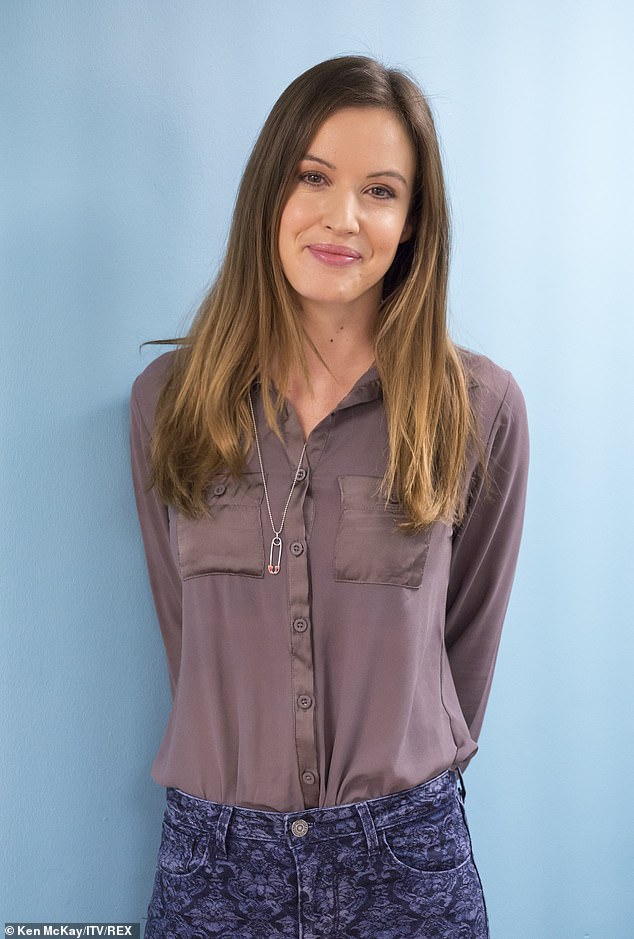 ‘I was about ten when he started punching me “to harden me up”. He left bruises. When I walked into a room he’d throw something at my face. But it was the mental abuse that really affected me. I felt belittled.’

She remembers trying to make herself invisible. ‘I’d chew my food quietly, not making any noise, trying to keep the peace to protect my mum.’

For Charlie’s abuse was inextricably linked to her mother’s: ‘Mum couldn’t speak to me because it enraged him, so in the end we stopped talking when he was around. He couldn’t stand me spending time with her. I feel he saw me as the key to empowering her and he was jealous.’

Each aspect of Joy’s life was controlled, including money and clothes; if she made herself look attractive to go out she was told to wear plainer outfits.

Charlie is careful not to indulge in melodrama when telling her story: ‘I’m still torn about how much to say. I’m so protective of my mum,’ she admits. But she is speaking out because she believes children are still overlooked.

She lists the many effects that living with domestic abuse have on children; from post-traumatic stress disorder, depression and anxiety to a higher risk of criminal behaviour and sexual exploitation, difficulties forming relationships, drug and alcohol misuse. 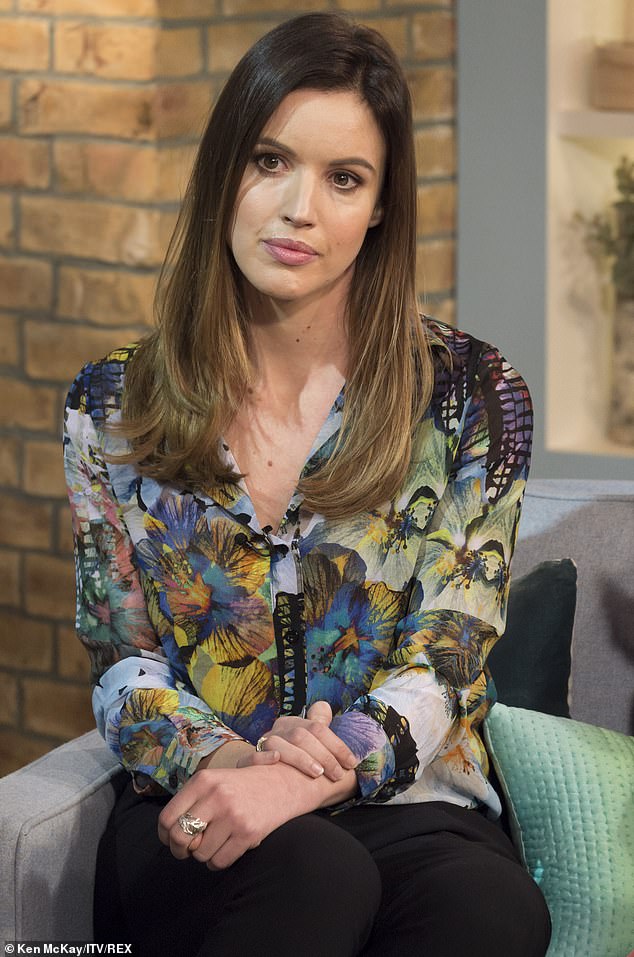 Charlie (pictured) said self-harm and drinking were escapism, temporary relief from the relentless conflict of emotions in her head

As Charlie grew up, school was her solace. ‘I loved it and started to find my personality. I loved talking as I couldn’t at home.’ However, her teens were bleak and, aged 18, she reached a nadir. Bedevilled by black thoughts she began to withdraw emotionally.

‘I felt like a zombie, nothing behind my eyes. I was diagnosed with depression. I felt lonely, rejected, worthless, unloved. I self-harmed — cut myself — drank a lot and took painkillers to see what happened. There was so much hurt and pain inside.

‘I don’t think I knew what suicide was, but I felt numb. Self-harm and drinking were escapism, temporary relief from the relentless conflict of emotions in my head.’

Abuse was not just confined to home. She was sexually abused by her running coach, who went on to serve ten years in jail for abusing other young athletes. ‘I got quite close to the coach,’ she said in a radio interview seven years ago. ‘He started to take me for a few private sessions saying that I was good. He abused the fact that I was an innocent who wanted his support as my coach.’

Now she knows that the predatory target the vulnerable: her abuser sensed her susceptibility.

When she was studying for her A levels there was more disruption: her mum, stepfather and brothers moved away from Sheffield and she moved in with her grandparents. 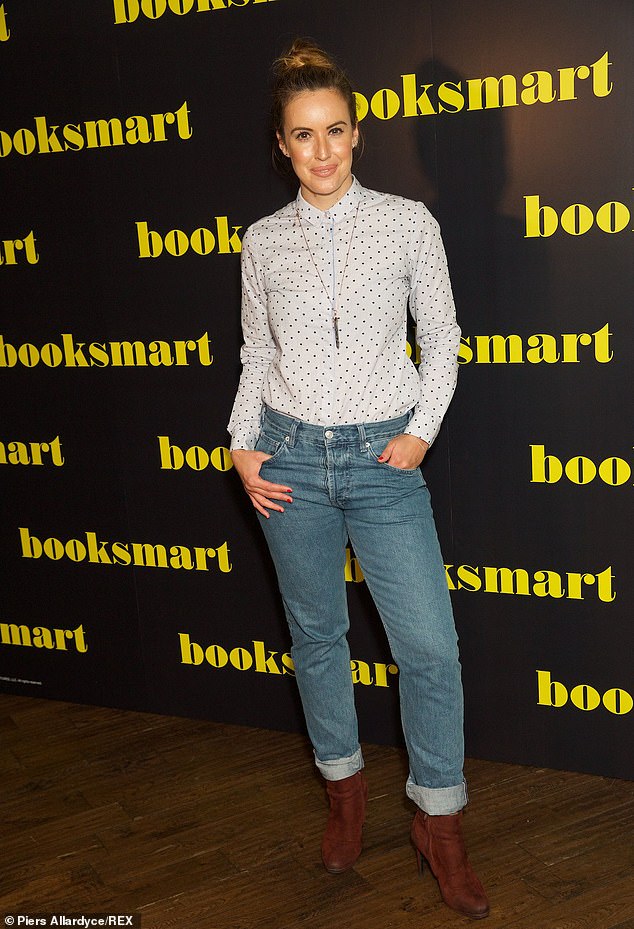 Charlie (pictured) said her mother lived with her for 18 months, after leaving her husband of 29 years

It must have been a relief to be free of the daily abuse? But Charlie says: ‘Actually, it felt like a massive rejection. I was the kid who’d been left. And I was so scared for my mum. My whole purpose as a child was making sure she was OK.’

Rage over the behaviour of her stepfather, plus a burning desire to prove him wrong, made her seek success. She went to Newcastle University to study language and linguistics; and was the first in her family to complete a degree course.

‘I paid my way through university, qualifying as a fitness instructor. Earning my own money was vital; if I didn’t earn, I didn’t eat. And I had this incredible drive, an unhealthy anger that can be very unforgiving. It created a hardened determination.’

After graduating she chose a media career, succeeding in a male-dominated arena. A regular on Sky Sports News, she specialised in football and motor sport, then made history as the first female boxing presenter.

Two years ago, her mother finally left her husband after 29 years, taking just ‘two Lidl bags’ of belongings and £60 she managed to squirrel away. Charlie was able to offer her sanctuary in her home and Joy is rebuilding her life.

‘Mum lived with me for about 18 months,’ she says. ‘For the first time in my life, we are free. We speak loads on the phone and talk openly, and see each other often. We are very close.’

‘Even now, my stepfather has power over me,’ she admits. ‘I still have to be wary of the doubt that creeps in. I’m just starting to believe someone will love me for myself.’