The core stage of a Chinese Long March 5B rocket is expected to fall back towards Earth this weekend after launching from China’s Wenchang spaceport last week. Pundits predict the rocket debris will deorbit at some point between Saturday and Sunday, although when and where the rocket will crash remains a mystery. The Long March 5B – China’s biggest and most powerful rocket – launched on April 29, carrying the Tianhe core module of the country’s new space station.

After placing the module into a stable orbit, the rocket debris was expected to safely fall back towards the planet.

Instead, the rocket managed to reach orbital velocity itself and is now circling the globe along a path that carries it over major populated hubs likes New York, Madrid and Beijing.

The rocket also appears to be travelling at speeds of nearly five miles per second. 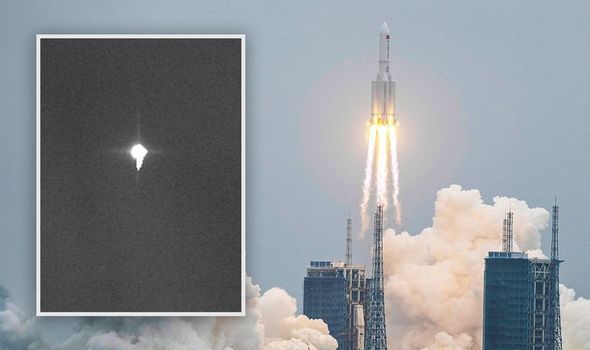 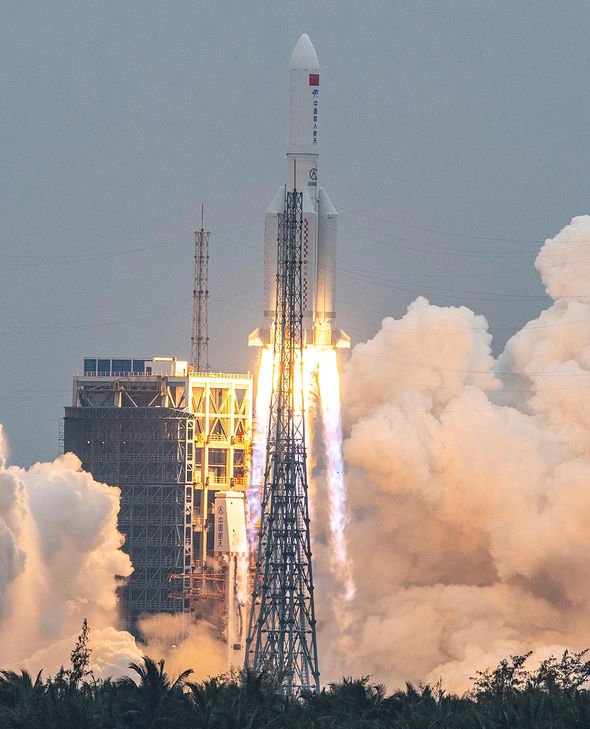 According to astrophysicist Gianluca Masi of the Virtual Telescope Project in Italy, the rocket’s carcass will likely fall towards Earth in “a few days”.

And because of the rocket’s out-of-control orbit, some experts fear the debris – officially designated CZ-5B R/B – could hit a populated area.

Astronomers have now caught a glimpse of the tumbling rocket, tracking the “exceptionally fast” object in the wee morning hours on Thursday, May 6.

Dr Masi said: “At the imaging time, the rocket stage was at about 700km from our telescope while the Sun sun was just a few degrees below the horizon, so the sky was incredibly bright: these conditions made the imaging quite extreme, but our robotic telescope succeeded in capturing this huge debris.

“This is another bright success, showing the amazing capabilities of our robotic facility in tracking these objects.

“As you can see, on the bottom of the bright image of the rocket there is a typical CCD blooming effect, due to the extreme brightness of the object.”

Dr Masi said “this is a huge debris” but he assured the chances of it causing a lot of damage on impact are low. 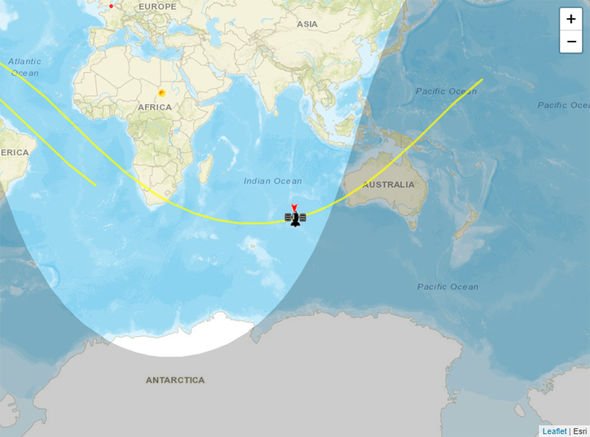 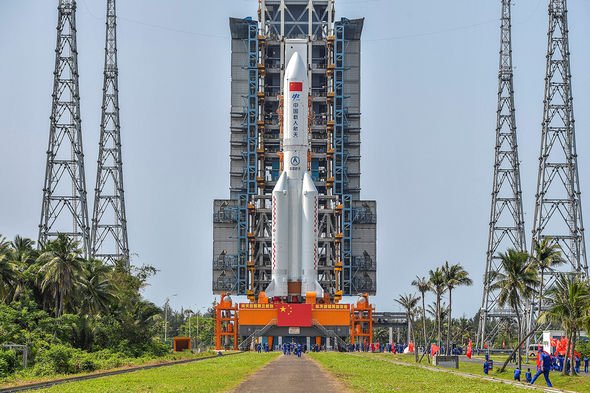 According to the expert, the debris could reenter the atmosphere on Sunday by about 3.23am BST (2.34am UTC).

There is disagreement over when the rocket will dive into the atmosphere but predictions will only improve the closer the rocket comes to deorbiting.

A spokesman for the US Department of Defense said on Wednesday an exact point of entry “cannot be pinpointed until within hours of its reentry” but it was expected to hit on Saturday.

Jonathan McDowell, an astrophysicist at the Astrophysics Center at Harvard University, also tweeted on Thursday: “And no, we still don’t know *where* it’s going to come down.

“Uncertainty on *when* is still ‘sometime Saturday or Sunday’.”

The expert also took a potshot at China for allowing the situation to develop in the first place.

He told SpaceNews: “I think by current standards it’s unacceptable to let it reenter uncontrolled.”

As the rocket orbits the planet every 90 minutes, the planet’s gravitational pull and the effects of atmospheric drag are pulling it towards the surface.