United States President Joe Biden personally raised China’s wave of trade strikes against Australia with Xi Jinping, as a top American official warned that Beijing wanted to drive Canberra “to its knees” and “break” it through economic coercion.

Kurt Campbell, President Biden’s top adviser on Asia, also said there was a “shared ambition” to deliver Australia a fleet of nuclear submarines under the AUKUS defence pact, saying the move would be “among the most significant things that we accomplish”. 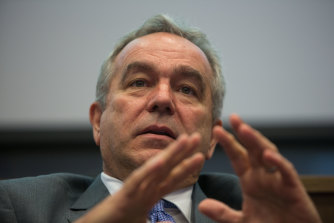 He also confirmed that more American submarines will dock down under and that Australian navy personnel will serve on American ships as the two militaries look to operate more together while building the nuclear-powered fleet.

China has over the past 18 months imposed more than $20 billion of trade strikes on Australian exports in response to a number of decisions including the push for an inquiry into the origins of COVID-19 and the banning of Chinese telco Huawei from the 5G network.

In his meeting with the Chinese leader last month, Mr Campbell said the US president “briefly mentioned activities that China was undertaking that President Biden felt were antithetical to China’s interests”.

“So President Biden was very clear and animated about what we had seen in Australia, border issues with India, all the things that I’ve mentioned, and just basically said, we were concerned,” Mr Campbell told a Lowy Institute event.

“We’re concerned by some of these steps and what it signals with respect to China.”

It was speculated that Mr Biden was planning to use his first summit with Mr Xi last month to confront the Chinese president about his country’s economic coercion, but this is the first confirmation that he specifically raised the case of Australia.

Mr Campbell said his government had assessed that the “feedback loop” in China was not working as effectively as in the past and so Mr Biden wanted to reach the Chinese leader “who may be a bit isolated at the top”.

The top US advisor said he believed China will reengage with Australia “on Australian terms”.

“China’s preference would have been… to break Australia. To drive Australia to its knees. And then you know, find a way forward,” Mr Campbell said.

“I don’t believe that’s going to be the way it’s going to play out. I believe that China will engage because it is in its own interest to have a good relationship with Australia.”

Mr Campbell said “seven or eight years ago” it was believed that Australia and Britain were among the countries “most likely to realign” and drift away from the US. But he said the two countries stayed close with the US “largely driven by Chinese actions”.

The AUKUS agreement between Australia, the US and Britain commits to a “shared ambition” to support Canberra to develop a fleet of nuclear submarines.

Asked whether there was a “cast-iron” guarantee for Australia, Mr Campbell said, “I don’t think our leaders would have gotten behind it if we didn’t think that this was an achievable goal”.

Asked whether the increased “melding” between American and Australian forces would take away Australia’s sovereignty, Mr Campbell said the aim was to provide “new capacities” so that there will be more “strategic intimacy”.

“I think what I’m suggesting is that Australian sailors will have the opportunity to serve on American vessels and vice versa,” he said.

“I think you can expect American submarines to port more commonly in Australian ports.”

An intense domestic debate about Taiwan has erupted after Labor’s foreign affairs spokeswoman Penny Wong accused Defence Minister Peter Dutton of being “wildly out of step” with the US for declaring it would be “inconceivable” that Australia would not join in with an American operation to defend the island.

For decades, Australia has followed the US’s policy of “strategic ambiguity” towards Taiwan – meaning that it does not state publicly whether they would defend it in the event of an attack by China, which regards Taiwan as a renegade province.

Mr Campbell said that the US policy had not changed and it “forms the basis of our overall approach in preserving of peace and stability across the Taiwan Strait”.

He said the scale of China’s military build-up was “remarkable” and had “unnerved people enormously in every nation in the Indo-Pacific, but increasingly globally”.