In 2012, Hurricane Sandy was about as close to a worst-case scenario storm for the New York, New Jersey and Connecticut area as one could imagine. With a storm surge of 9 feet inundating highly populated areas and valuable real estate, it was the fourth costliest hurricane in U.S. history, causing nearly $63 billion in damage.

In the case of Hurricane Sandy, nearly all the damage was caused by storm surge as the strong winds, low pressure and fast forward motion of the storm funneled Atlantic Ocean waters into the triangle-shaped, low-lying coast of the tri-state area. And since sea level is higher than it was a century ago, ocean waters were able to penetrate further inland, with deeper flood waters impacting more homes and causing more damage. In total, more than 650,000 homes were damaged or destroyed by the storm, and over 150 people lost their lives. 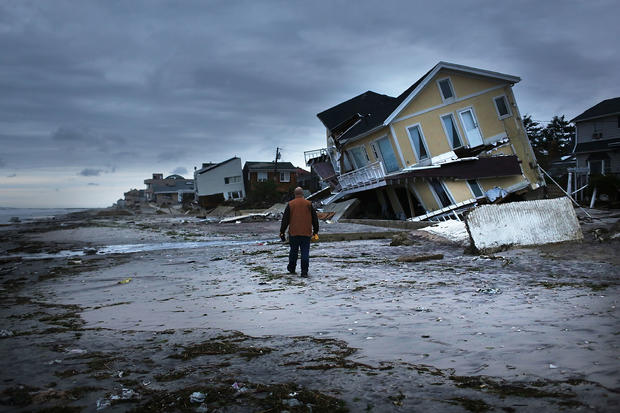 “Human-caused sea level rise is already making every coastal flood more destructive and costly,” said Benjamin Strauss, CEO and chief scientist at Climate Central and the lead author of this study. “The costs of climate change are likely much greater than we appreciate today.”

The authors say estimates of economic damage due to climate change for individual extreme weather events are very rare, and that this paper may be the first analysis to put a price tag on how much more money a storm cost due to higher sea levels.

“If we were to calculate the costs of all coastal flooding damage [higher sea levels] cause, it would provide clarity on the severe damage we are inflicting on ourselves and our planet and hopefully add urgency to doing more to prevent it,” said co-author Philip Orton, a professor at Stevens Institute of Technology.

The authors say that, conservatively, at least 4 inches of sea-level rise in the New York area can be attributed directly to human-caused climate change from 1900 to 2012, but it could be as much as 8 inches.

That seemingly small increase in water levels leads to a significant increase in cost. Even though in many cases the excess flood water from sea-level rise may only cause shallow flooding to homes, it can often be just high enough to reach critical systems.

In order to reach these conclusions, the authors used computer models to simulate water levels and damage, both as they occurred in Sandy and as they would have occurred across a range of sea levels corresponding to different estimates of the human component of sea-level rise.

Because nearly all the damage from Sandy was coastal flooding caused by storm surge from the ocean, it was an ideal storm to calculate the extra costs of climate change and, Strauss says, it made the study easier.

However, in all these cases, human-caused climate change makes the damage worse because the excess heat in the climate system from heat-trapping greenhouse gases adds energy to the storm. That energy can manifest as heavier rain, stronger winds, higher sea levels resulting in more flooding, or all of the above.

Specifically for Sandy, Strauss says this study’s findings are best seen as a conservative, low-end estimate, based on isolating climate change’s impact only on sea-level rise.

“Sea-level rise is just one way for climate change to have made Sandy worse. It is quite possible that climate change affected the strength, track, or timing of the storm. If any of those effects played a role, then our estimate of damages is too low,” he told CBS News.

And in the future, Strauss says coastal residents and policy makers need prepare for escalating damage because the proportion of climate change-enhanced flood damage will not only go up, but also increase at a faster rate.

“The relationship between coastal flood levels and damages is not a straight line. As seas rise and water levels increase during coastal flood events, damages can be expected to escalate even more rapidly.”