Cold War atomic bomb testing from more than 50 years ago has helped scientists correctly determine the age of whale sharks for the first time.

An international team of scientists measured levels of a carbon isotope in shark bone that permeated the oceans during atomic bomb tests in the 1950s and 1960s.

The presence of the carbon isotope – carbon-14 – in the shark bone told them that two sharks were up to 50 years old at time of their eventual death.

The study of the whale shark – the world’s largest fish – will help ensure the future of the endangered and protected species, the researchers say. 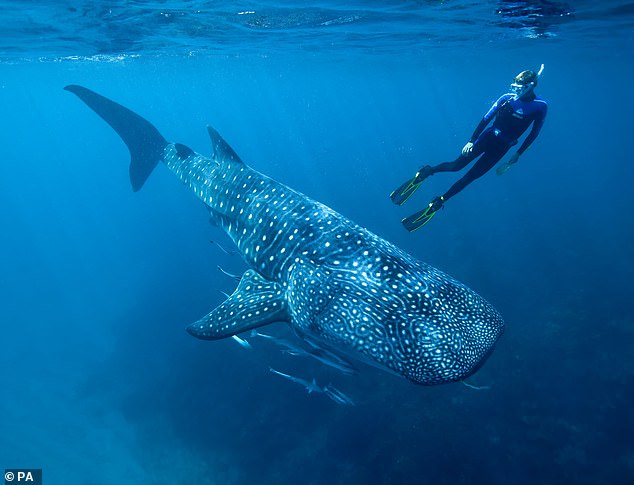 ‘Earlier modelling studies have suggested that the largest whale sharks may live as long as 100 years,’ said Mark Meekan from the Australian Institute of Marine Science in Perth, Western Australia.

‘However, although our understanding of the movements, behaviour, connectivity and distribution of whale sharks have improved dramatically over the last 10 years, basic life history traits such as age, longevity and mortality remain largely unknown.

‘Our study shows that adult sharks can indeed attain great age and that long lifespans are probably a feature of the species.

‘Now we have another piece of the jigsaw added.’ 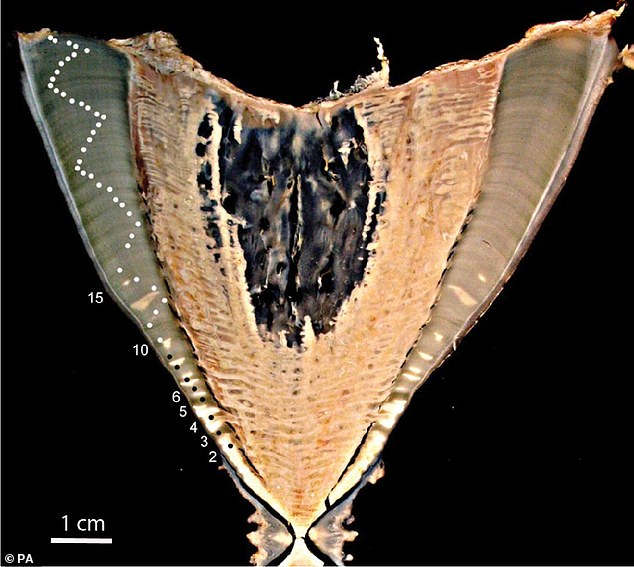 WHAT IS THE WHALE SHARK?

It forages for food at or near the surface of the ocean.

Its large mouth is well adapted to filter feeding, meaning it feeds by straining suspended matter and food particles from water.

The whale shark contains more than 300 rows of small, pointed teeth in each jaw.

They are found in the western Atlantic Ocean from the coast of New York to central Brazil, including the Gulf of Mexico and the Caribbean Sea.

Whale sharks also inhabit the Indian Ocean and the western and central Pacific.

The species is labelled ‘endangered’ by the International Union for Conservation of Nature, with populations decreasing.

It is a docile species that poses no threat to humans.

Today, whale sharks are endangered and protected as a high-value species for eco-tourism.

Conservation strategies for endangered and threatened species, including the whale shark, require accurate estimates of factors such as age and growth.

But until now, the age of the sharks has been difficult to measure, as sharks and rays lack bony structures that are used to determine the age of other fish.

So a team of researchers, including Dr Meekan, turned to the radioactive legacy of the Cold War’s nuclear arms race.

During the 1950s and 1960s, the USA, the Soviet Union, Great Britain, France and China conducted tests of nuclear weapons, many of which were detonated several kilometres in the air.

One result of the blasts was an atmospheric doubling of carbon-14, which is commonly used by archaeologists and historians to date ancient bones and artefacts.

The rate of decay of carbon-14 is constant and easily measured, making it ideal for providing age estimates for anything over 300 years old. 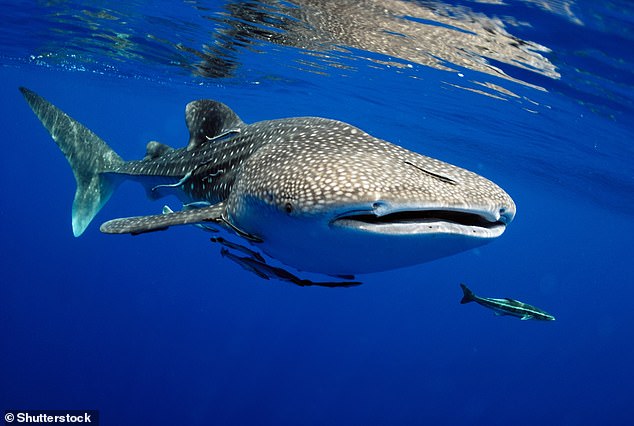 The nearly 60-foot-long whale shark doesn’t generally pose a threat to humans. The species is described as endangered with populations decreasing still

Whale shark vertebrae, meanwhile, feature distinct bands – much like the rings of a tree trunk, which increase in number as the animal grows older.

Some studies suggest that a new ring is formed every year, while others conclude that it happens every six months.

‘We found that one growth ring was definitely deposited every year,’ Dr Meekan said.

‘This is very important, because if you over or under-estimate growth rates you will inevitably end up with a management strategy that doesn’t work, and you’ll see the population crash.’

Measuring the radioisotope levels in the successive growth rings allowed a clear determination of how often they were created, giving an indication of the shark’s age.

Using the bomb radiocarbon data, Dr Meekan and his team conducted testing of from sectioned vertebrae from two deceased whale sharks in Pakistan and Taiwan.

Ages of up to 50 years were estimated at time of death – the first time such an age has been unambiguously verified.

The results, which have been published in Frontiers in Marine Science, also confirm the use of sectioned vertebrae as age indicators for these sharks.

WHAT IS CARBON DATING AND HOW IS IT USED?

Carbon dating, also referred to as radiocarbon dating or carbon-14 dating, is a method that is used to determine the age of an object.

It can only be used on objects containing organic material – that was once ‘alive’ and therefore contained carbon.

The element carbon apears in nature in a few slightly different varieties, depending on the amount of neutrons in its nucleus.

Called isotopes, these different types of carbon all behave differently.

Most of the stable, naturally occurring carbon on Earth is carbon 12 – it accounts for 99 per cent of the element on our planet.

Another carbon isotope is Carbon-14, a radioactive version of carbon.

It occurs naturally in the atmosphere as part of carbon dioxide, and animals absorb it when they breathe.

Animals stop taking it in when they die, and a finite amount of the chemical is stored in the body.

Radioactive substances all have a half-life, the length of time it takes for a material to lose half of its radioactivity.

This long half-life can be used to find out how old objects are by measuring how much radioactivity is left in a specimen.

Due to the long half-life, archaeologists have been able to date items up to 50,000 years old.

Radiocarbon dating was first invented in the 1940s by an American physical chemist called Willard Libby. He won the 1960 Nobel Prize in Chemistry for his discovery.