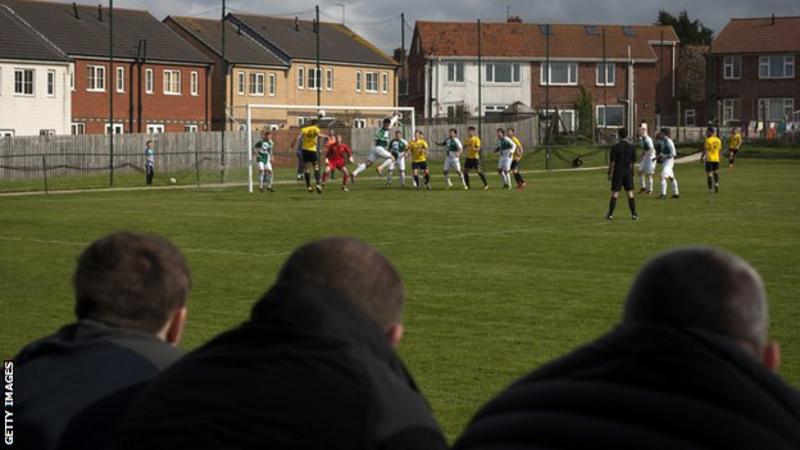 Non-league clubs have claimed they first discovered their seasons would end immediately through social media.

All football in England below the three National League divisions was ended on Thursday as the Football Association confirmed results would be expunged, with promotion and relegation scrapped.

Steps three to seven in men’s non-league football, which contains 91 leagues, have now finished their seasons, while a decision has yet to be made over how to conclude the National League, National League North and South, Women’s Super League and Women’s Championship campaigns.

The FA responded to the reaction of clubs such as South Shields by referring to their original statement from Thursday.

‘Decision shouldn’t have been rushed’

South Shields were 12 points clear at the top of the Northern Premier League with nine games to play. But the north east club, joint-managed by former Blackburn striker Graham Fenton, will now miss out on their chance of playing in National League North next season.

“There hasn’t been any dialogue,” Thompson said.

“We got to hear of this decision from social media – there was no formal communication from our league nor through the FA itself.”

Thompson also confirmed the club are considering legal action and have also been in discussions with other clubs in similar predicaments.

“We’ll be canvassing opinions and I have a call with the FA on Friday,” he said.

“Realistically, it’s highly unlikely we’re going to be able to overturn the decision.

“But the reality is football will return and I don’t think this decision should have been rushed.”

Being denied promotion would also have a financial impact on the club, he said.

“Had we got promoted we would have been in the same company as clubs like Spennymoor, Darlington, Gateshead and Blyth so there would have been a lot more local derbies and significantly higher gates,” he added.

“We made some big investments this year in the effort to get up, so it’s a difficult time. We’re having to re-cut our numbers for next year, whenever that may be.

“Clubs like ours are making big financial decisions in an effort to move our club forward to the benefit of the community that we represent, and we believe we have an opportunity to represent our town and get into the Football League at some point.

“We were making all the right steps and this has come as a huge shock.”

‘It’s all been for nothing’

Thompson’s views are echoed by Wayne Brown, manager of Maldon & Tiptree, who looked set to win promotion to the Isthmian Premier Division – the seventh tier of English football.

They were 14 points clear at the top of the Isthmian North Division with 12 games to play having lost just twice in the league all season.

“We likewise found out from social media without any prior consultation,” the former Ipswich centre-back told BBC Radio 4’s Today programme.

“This decision has come just 12 days after the suspension of games.

“I can’t see what the rush is. There’s many players at our level on a non-contract basis, so clubs don’t have to pay wages if games aren’t played.”

Maldon grabbed the headlines earlier this season when they reached the FA Cup second round, upsetting League Two side Leyton Orient in round one.

Media playback is not supported on this device

“I feel for the people who have committed a huge amount of time and finance, plus the volunteers we have at the club who’ve helped out all year,” Brown said. “It’s all been for nothing.

“There’s been a lot of money invested from the chairman and the owner and we’ve had 31 weeks where it’s all been in vain.

“The players have also made the sacrifice, travelling after work in most cases and long distances, to play the games and try and be successful.

“Unfortunately we’ve been denied the ambition and opportunity to progress up the leagues.”

The decision to void the season has also been met with anger from clubs in the women’s game.

Barnsley were top of the FA Women’s National League – Division One North, the fourth tier of the women’s game, above Leeds United on goal difference and with three games in hand.

The Tykes accused the FA of “discriminating against women” by not treating tiers three and four of the women’s game in the same way as the equivalent level of the men’s game, and called on the governing body to reverse their decision.

“The FA has just unnecessarily damaged or taken away the dreams of thousands of female players,” a club statement read.