What makes The Amazing Race amazing? This local season of the veteran reality franchise possibly shouldn’t exist, and the constrictions that went into its production in 2020 – a year many of us weren’t leaving home – may well be a referendum on its appeal. If you think the show can’t succeed without sprints to the ticket counter at airports and international flights, then this iteration will test you. If you believe the quality of its contestant casting is the key, then you’ll be just fine. 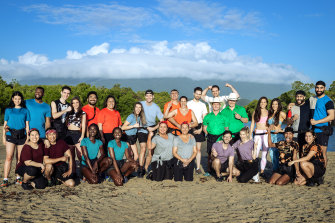 The cast of Network Ten’s 2021 season of The Amazing Race.Credit:Ten

Beginning with a snatch of a welcome to country ceremony in Queensland’s tropical north, this season is staying within Australia’s borders. In just its second outing with Ten, production was postponed several times in 2020 before commencing in October.

While it’s currently unclear where the course ran, it’s difficult to imagine states such as Victoria or Tasmania will feature in any way. The counterpoint? Sticking to tropical/warm weather environments keeps the season’s coterie of models/influencers minimally dressed.

Either way, those at the starting line are delighted to be involved. The Amazing Race consistently has the most excited contestants of any long-running reality series. These pairings are stoked that they’ll be driven to the point of exhaustion, left frustrated by mercurial challenges, and have their personality flaws exposed on national television. In other words girlfriend and boyfriend Holly and Dolor, whose power couple preening masks a questionable control and reward dynamic on his part, are in terminal velocity.

Thankfully, there are 13 other teams on the starting line and they are an absolute model of diversity. Seriously, The Bachelor and The Bachelorette should take notes. You’ve got Sikh pals Jaskirat and Anurag, cowboys Brendon and Jackson, Aboriginal cousins from the Kimberley, Dwes and Katherine (he’s gay, she’s an AFLW co-ordinator), and middle-aged mums Jude and Shannon.

“Keeping this season in parts of Australia means the producers have to be careful not to over-indulge in Aussie jingoism.”

A contemporary mix doesn’t guarantee a good show, but it increases the chance of finding stand-out characters and creating contrasting approaches to racing.

I have high hopes for sibling male models Alex and Jack, who already feel marked apart from other teams. “They may not like us because we’re…” they begin, leaving you hoping for a Zoolander-like “ridiculously good-looking” but instead concluding with a modest “in sync”; their exposure to cane toads is memorable.

My initial favourite is Jessica, whose Polynesian heritage and dry sense of humour suggest she’s stepped out of a Taika Waititi comedy. Hopefully first aid was always on hand, because she is capable of delivering a sick burn to best friend Sefa or another competitor at any time. 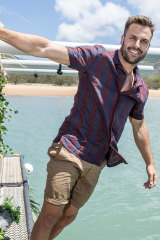 The debut episode keeps teams within touching distance of the town of Mossman, north of Cairns and near the edge of the Daintree Rainforest.

The show’s elastic sense of spacing is tightened, but the mix of challenges is familiar right down to the needle-in-a-haystack quest that will invariably snag one team for far longer than any other. Other reassuring Amazing Race tropes include a contestant saying “I pray to God that we don’t get lost” and then, naturally, getting lost.

There are signs host Beau Ryan, a graduate of the NRL Footy Show, has a better sense this year of when to be the big larrikin and when to focus on empathy – even he can see Holly and Dolor have issues. Keeping this season in parts of Australia means the producers have to be careful not to over-indulge in Aussie jingoism – the landscape can speak for itself, especially with a multiplicity of faces traversing it.

If they can, The Amazing Race just might make it.

Why watch: Somehow shot during a year defined by lockdowns, the adventure reality competition manages to keep the format alive with teams travelling around parts of Australia.

If you like: Jumping off things, watching frustrating tasks from the safety of your couch, or offering snap judgments on whether a relationship can last.

What you’ll want to search: If you don’t follow rugby league, Amazing Race host Beau
Ryan may be an unknown to you, so start with his 2014 single Where You From? It’s a light-
hearted tribute to Australia’s multicultural mix that proves as a singer he’s not a bad TV host.