A single father has come under fire for making his teen daughter do household chores to pay for her menstrual products and after-school activities — but his athlete son isn’t expected to help out in any way because he plays sports.

Reddit user u/ThrowAwayGirlVsBoy was branded ‘sexist’ after he took to the ‘Am I the A**hole’ forum last year to ask if he was in the wrong. The post was so outrageous that it has resurfaced again, seven months later.

The widower, who was 50 at the time, explained that he lost his wife a decade ago and was raising their 17-year-old son ‘N’ and 15-year-old daughter ‘E’ by himself, but his treatment of his youngest child had come into question.

‘Recently it caused a big stink with some family that my daughter does chores, but my son does not,’ he wrote. ‘I explained it’s because I have to spend extra on my daughter each month not only for her extracurriculars, but for her monthly supplies, so it’s my way of having her pay me back.’ 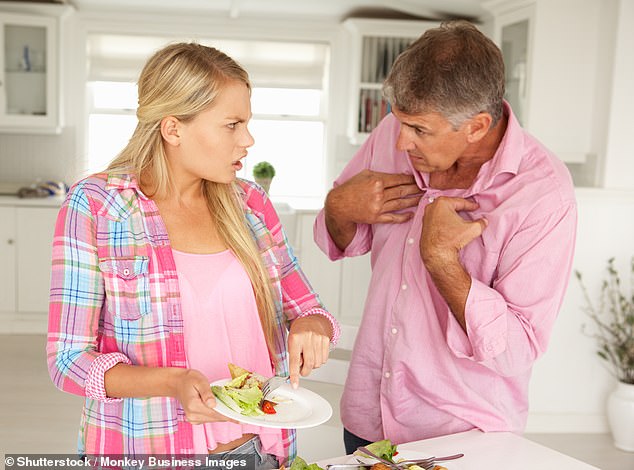 Say what? A widower revealed that he makes his teen daughter do chores to pay for menstrual supplies and after-school activities, but his son doesn’t have to help out at all (stock image)

Unbelievable: The backlash was swift and commenters slammed him for being ‘abusive’ to his only daughter while favoring his son

The dad said he has his daughter clean the shared living spaces and bathrooms in their apartment, and she is also required to cook them four meals a week.

‘My brother said I spend twice as much on my son’s extracurriculars and by my logic, he should have to do chores too,’ he said. ‘I explained he didn’t because I feel his could help him get into college but hers were just a hobby in my opinion.’

He admitted that his daughter ‘very upset’ when she overheard what he said to her uncle, prompting a fight between them.

‘She started refusing to do chores because it isn’t fair. I told her she’d still be doing her chores and life isn’t fair so stop being a brat, or I’d refuse to pay for her extra curricular stuff or pads,’ he admitted. ‘I wouldn’t actually do that, but I was mad when I said it.

‘She packed a bag and took off. She’s been staying with my sister who called me an abusive a**hole when I demanded she send E home. My brother and sister are coddling her and I’m furious,’ he added. ‘N said I was being an a**hole to E and that’s why she left. I’m completely fed up with the whole thing.’

The backlash was swift and commenters slammed him for being ‘sexist’ and ‘abusive’ to his only daughter while favoring his son.

‘This can’t be real….YTA…you make your daughter [do] chores because you have to pay for period supplies monthly…which she literally cannot help? You’re an a**hole in every way,’ one person responded.

Someone else accused him of blatant ‘sexism,’ writing: ‘Withholding pads from a teenage girl as punishment? What? Expecting your son will go to college, but basically writing her off? The 50s called, they don’t want you either.’

‘Last time I checked a box of pads doesn’t cost the same as weekly housekeeping,’ another added.

Some also noted that he was doing a disservice to his son by not making him do any housework to prepare him for adulthood.

The father updated the post amid the backlash to double down on his claim that his son has a ‘better chance’ at getting a scholarship for football and baseball than his daughter does in the choir and dance group.

‘I’m not sexist and I don’t appreciate being called one, and for those of you messaging me saying you hope someone calls CPS on me, I’m not doing anything wrong so that’s just stupid,’ he hit back.

Outraged readers couldn’t get over his thinking, and some were quick to point out that his daughter is probably more likely to get a scholarship for her pursuits.

‘What’s interesting, and sad, is that his daughter probably has a much better chance at getting scholarship offers than his son,’ one person commented. ‘Unless his son is an absolute god on the field or something (not impossible, but statistically improbable).’