The 33-foot-long creatures adapted their limbs into flippers, streamlined their bodies and formed whale-like fluked tails to help them move through the water.

Artist’s impressions of the creature, based on computer scans from fossils, show an odd dolphin-crocodile style hybrid with sharp teeth.

Researchers say thalattosuchians adapted part of their inner ear, responsible for balance and equilibrium, as they adjusted to a watery environment. 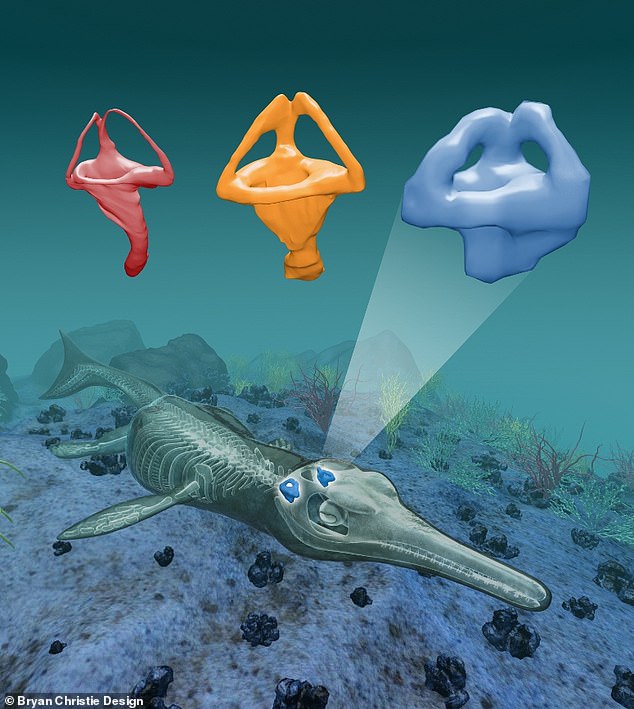 Artist’s conception of a metriorhynchid, an extinct crocodile relative that lived from the Middle Jurassic to the Early Cretaceous (168 – 125 million years ago). The shapes represent the evolution of the inner ear (bony labyrinth) from terrestrial (left) through semiaquatic (middle) to pelagic (right)

Three different inner ears based on the habitat the thalattosuchians lived in. After the transition to pelagic or the open sea, the croc’s ear canals became notably fatter and smaller – a shape that made the sensory system less sensitive

‘Sensory organs such as the inner ear are key to understand how ancient animals lived,’ said Julia Schwab at the School of Geosciences, the University of Edinburgh.

‘We found that marine crocodile relatives have a very unique inner war shape, similar to other water-living reptiles and today’s whales.

The crocodiles’ sensory systems evolved in response to their deep water environment, rather than driving them into it.

‘The ancient aquatic crocs developed unusual inner ears after modifying their skeletons to become better swimmers,’ said senior author of the study Dr Steve Brusatte from the University of Edinburgh.

‘Whales also changed their ears in a similar way, but did it soon after entering the water.

‘It seems like the crocs and whales took similar but different evolutionary routes from land to water.’ 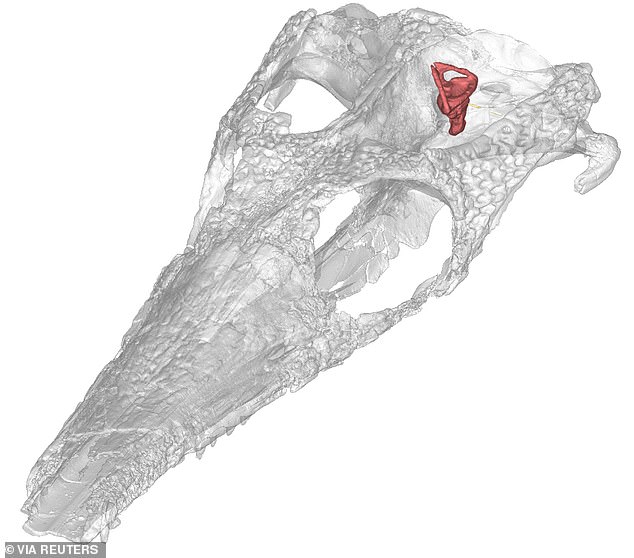 The skull of the Jurassic Period marine crocodile relative Pelagosaurus the thalattosuchia clade, based on a CAT-scan, is seen with the left inner ear pictured in red showing a crucial evolutionary modification that helped the reptile thrive in the open ocean

They examined the anatomy of the vestibular system of the inner ear – comprising three looping semi-circular canals that helps with agility and spatial awareness.

During an initial semi-aquatic phase when thalattosuchians frequented but did not completely live in water, a change in the vestibular system occurred, the analysis revealed.

An impression of the Jurassic Period marine crocodile relative Cricosaurus, also a  thalattosuchia

Their ear canals became notably fatter and smaller – a shape that made the sensory system less sensitive and closer to that in dolphins and whales.

This canal shape is better suited to life in the oceans, where buoyancy – otherwise known as upward thrust from the water – supports the animal.

This compares to a canal shape suited to life on land, which requires are highly sensitive awareness of balance to cope with gravity and landscapes.

A similar change occurred independently in whales – which evolved from four-legged land-dwelling ancestors that lived about 50 million years ago.

It is though that both whales and thalattosuchians mimicked each other’s changes during this period of adaptation.

The study has been published in Proceedings of the National Academy of Sciences.

WHAT DO WE KNOW ABOUT THE EVOLUTION OF CROCODILES?

Of all the reptiles alive today, crocodiles may be the least changed from their prehistoric forebears of the late Cretaceous period, over 65 million years ago

However, the even earlier crocodiles of the Triassic and Jurassic periods sported some distinctly un-crocodile-like features, such as bipedal postures and vegetarian diets.

Along with pterosaurs – the family of flying reptiles – and their land-based relatives the dinosaurs, crocodiles were an offshoot of the archosaurs, the ‘ruling lizards’ of the early to middle Triassic period.

The earliest dinosaurs and the earliest crocodiles resembled one another a lot more than either resembled the first pterosaurs, which also evolved from archosaurs.

What distinguished the first crocodiles from the first dinosaurs was the shape and musculature of their jaws, which tended to be much more deadly, as well as their relatively splayed limbs—as opposed to the straight, “locked in” legs of theropod dinosaurs.

It was only well into the Mesozoic Era that crocodiles evolved the three main traits with which they’re associated today: stubby legs; sleek, armoured bodies, and marine lifestyles.