A deaf dog who was abandoned as a puppy and nursed back to health has gone viral on TikTok for understanding sign language.

PeeWee, a mixed terrier bull, from Minnesota was found wondering the streets at seven-months-old with a litany of health problems.

Shocking pictures show the pup with a huge burn on his back and covered in red rashes due to a skin infection.

However, the now 11-year-old pet was rescued by owner Nikki Engleman and has since shot to fame on TikTok for his understanding of American Sign Language (ASL). 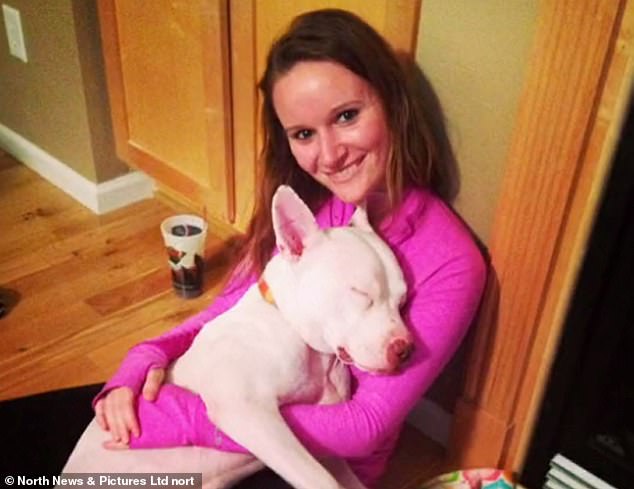 Peewee, a deaf mixed terrier bull rescue dog from Minnesota, had a rough start to life. But his owner Nikki Engleman has been teaching him sign language for basic commands, including the words for ‘treat,’ pictured, and ‘dad’ 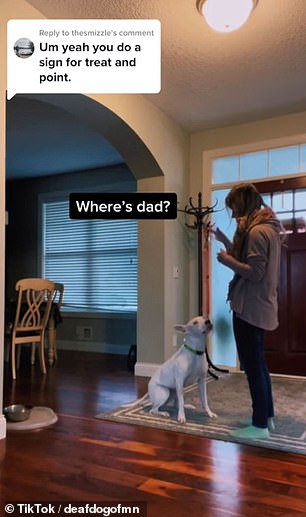 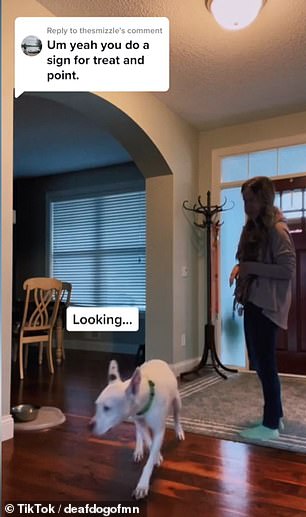 In another clip, Nikki can be seen asking in sign language ‘where is dad?’ PeeWee then dutifully starts to look for his owner around the house

Nikki, 35, said: ‘He was rescued as a stray at seven months old and we are assuming he was born deaf.

‘He was in a really rough state when he was found.

‘He had a skin infection and a huge burn on his back.

‘At first he struggled. It took a long time for him to be okay being left alone. 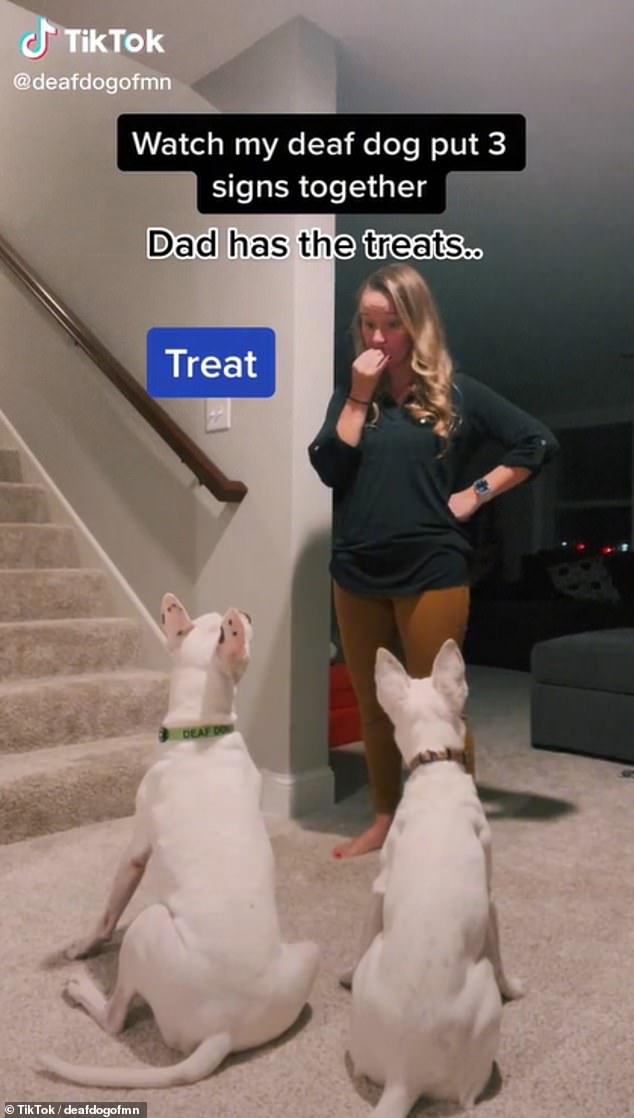 Nikki has been patiently teaching Peewee to understand sign language, and the rescue dog has been very receptive

In the video, Nikki is seen making the sign language for ‘dad’ and ‘go’. The family’s other dog Faith, right, can be seen following him in the video 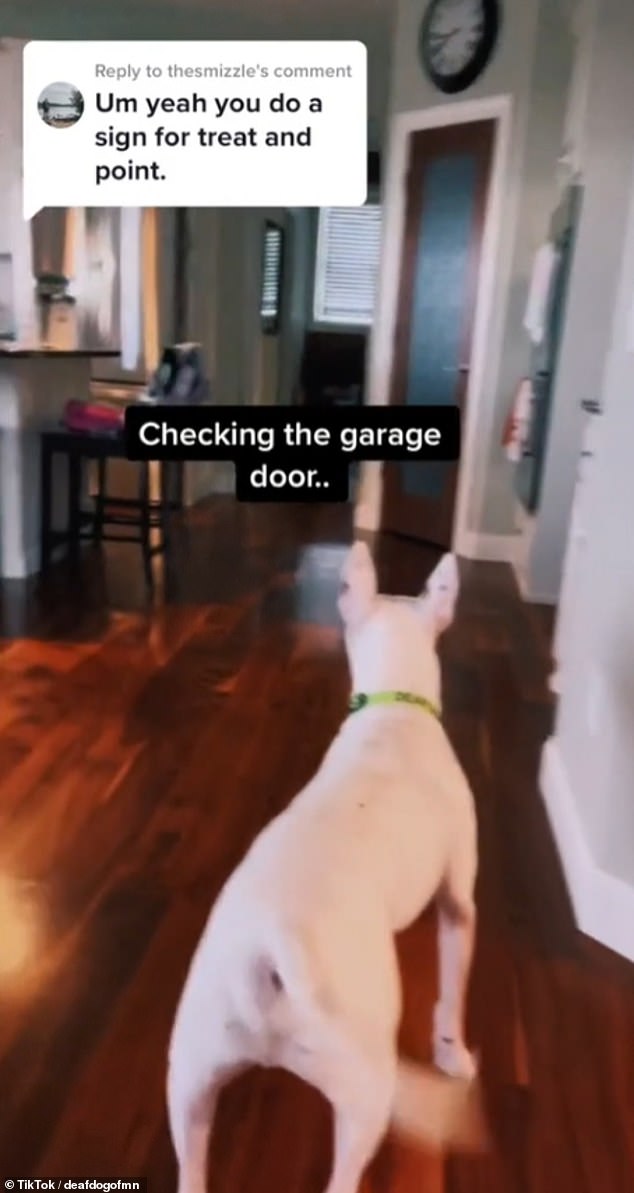 After Nikki asks ‘where is dad?’ in sign language, the dog looks at the garage door to see if his other owner is there 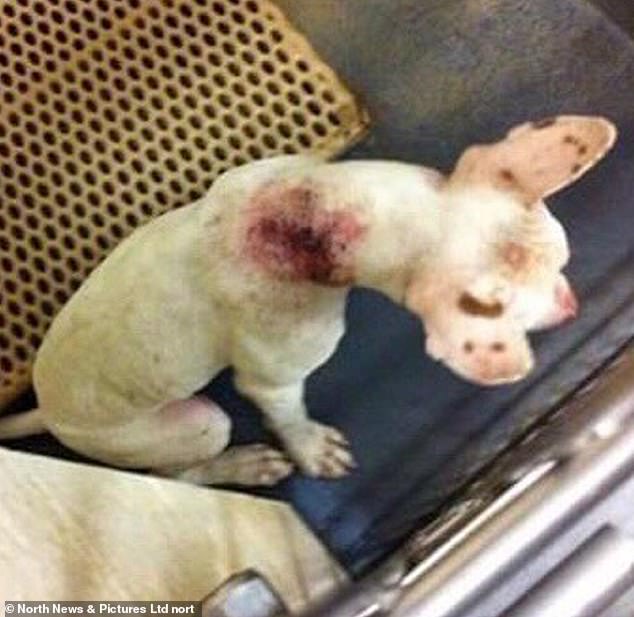 was found wondering the streets at seven-months-old with a litany of health problems. Shocking pictures show the pup with a huge burn on his back and covered in red rashes due to a skin infection 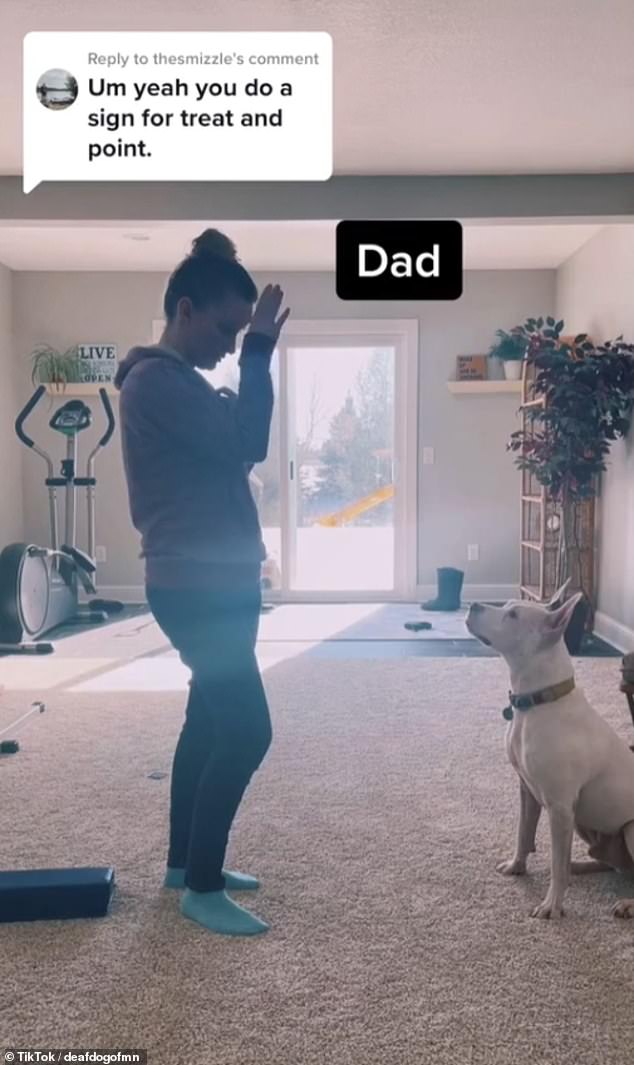 Nikki nursed the dog back to health. Here she is pictured signing the word ‘dad’ so that PeeWee can understand

‘Now, he’s a part of our family and he’s very good at communicating with us.

He’ll come and find us if he wants anything or will press his nose against you.

‘Because he’s deaf we had to use sign language to communicate with him.

‘We bought a signing with your baby book to learn how to sign but I did it with him instead.

‘It was a complete learning curve. I only knew a couple of things such as ‘thank you’ and ‘please’. 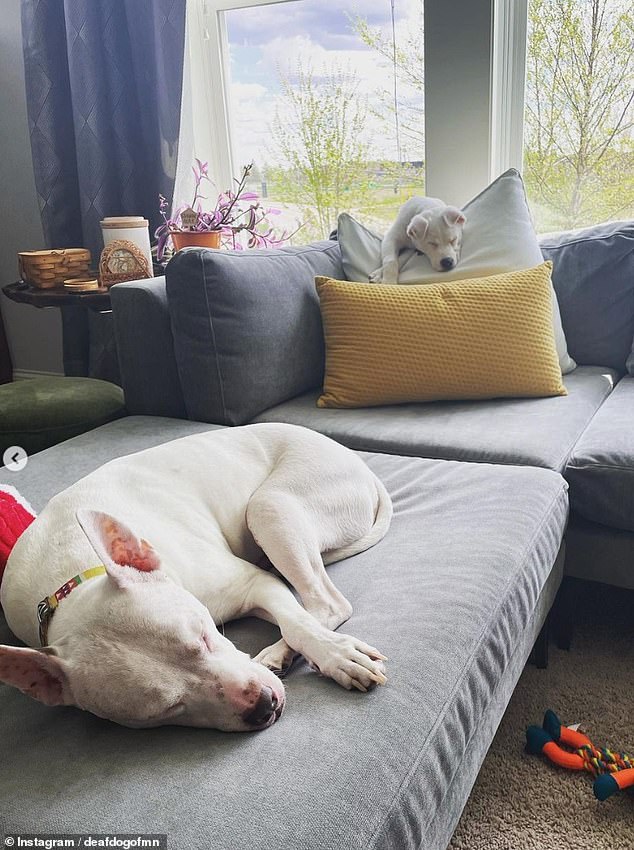 Nap time! PeeWee was rescued as a stray when he was a puppy, but has since then acclimated well to life with Nikki

‘He learns super fast, I taught him roll over in a day and he knows other words such as baby.

‘I started with the basics, I would sign for food and going to the bathroom and he picked it up.

‘He’s very smart, he’s one of the smartest dogs I’ve ever had.

‘He knows about 15 signs in total.

‘Some things are different with having a deaf dog, we have to tap him to get his attention or flicker the lights as he can’t hear us calling for him.’

Minnesota-based-Nikki has posted about PeeWee on TikTok to educate others  about ASL for dogs.

The pet now has 164k followers on the app.

One of his videos, which racked up 5.7 million views, shows Peewee and puppy Faith look at Nikki while she signs ‘Treat’ and ‘Dad’ before they sprint up the stairs.

One user commented: ‘what a smart boy!! I bet he learned treat pretty quickly though lol’

Another wrote: ‘I can’t stop watching this’

Nurse Nikki added: ‘People get really excited when they see it, they love it.

‘One of my friend’s sons is deaf and he thought it was really cool that he could communicate with a dog the way that he communicates. 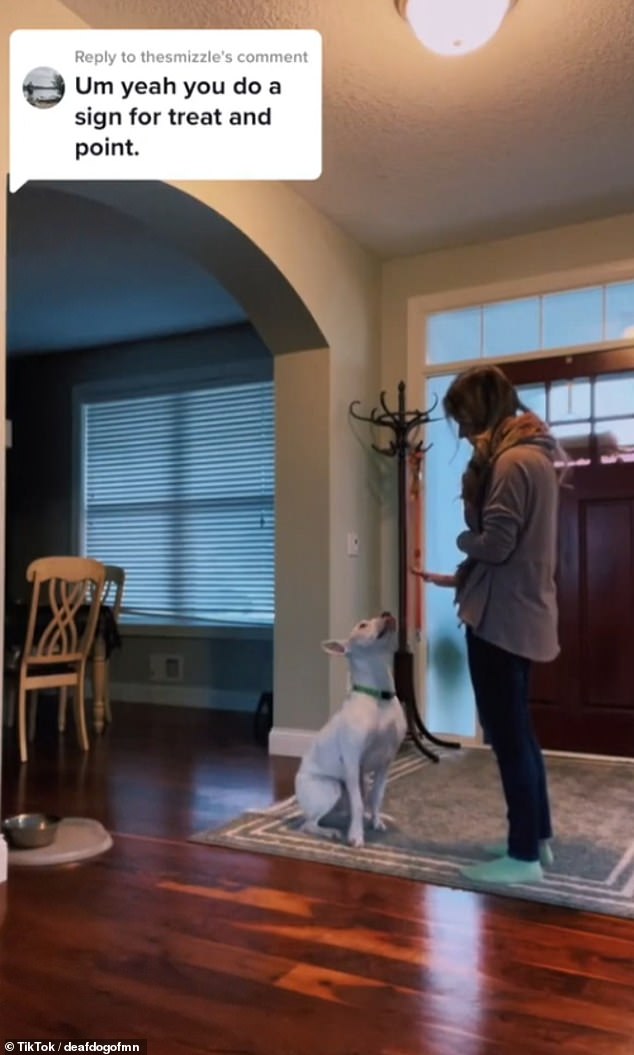 Nikki signing for PeeWee to stop and sit, before she goes on to sign more commands for him to understand 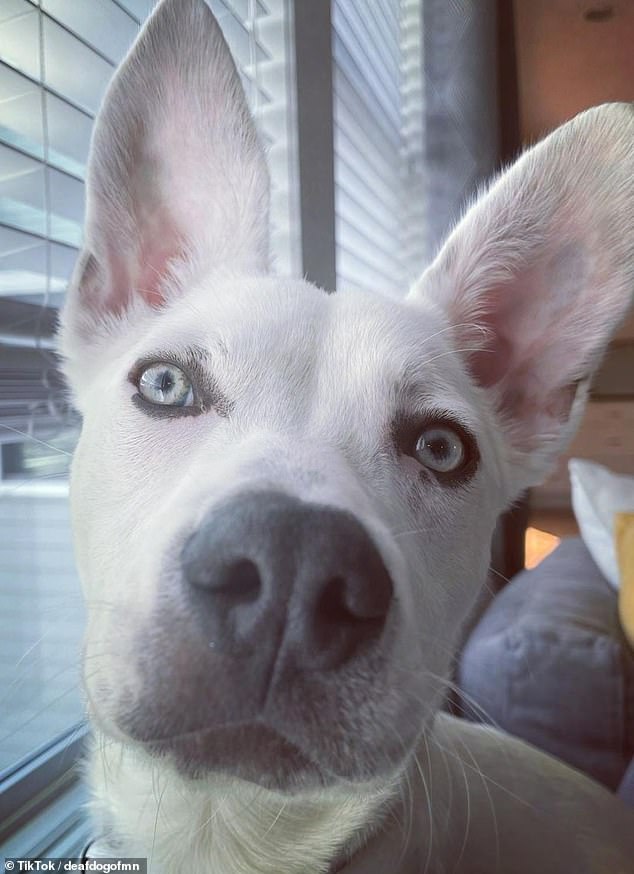 After a rough start to life, PeeWee has grown to be a healthy and happy rescue pup living with Nikki

‘Our children are four and five years old and it’s great because we knew sign language when they were born so we taught them it as babies.

‘They also communicate with Peewee through sign language and they have that skill for life now.’

Nikki has also now fostered a second deaf dog, Faith, 8-months-old, and is training her in the same way.

Nurse Nikki added: ‘We have a foster puppy now who is also deaf.

‘She struggles to learn and to keep attention but she’s only a puppy.

‘PeeWee guides her a lot, Faith looks to him for everything.

‘He’s a big bother to her, which is awesome to see.’ 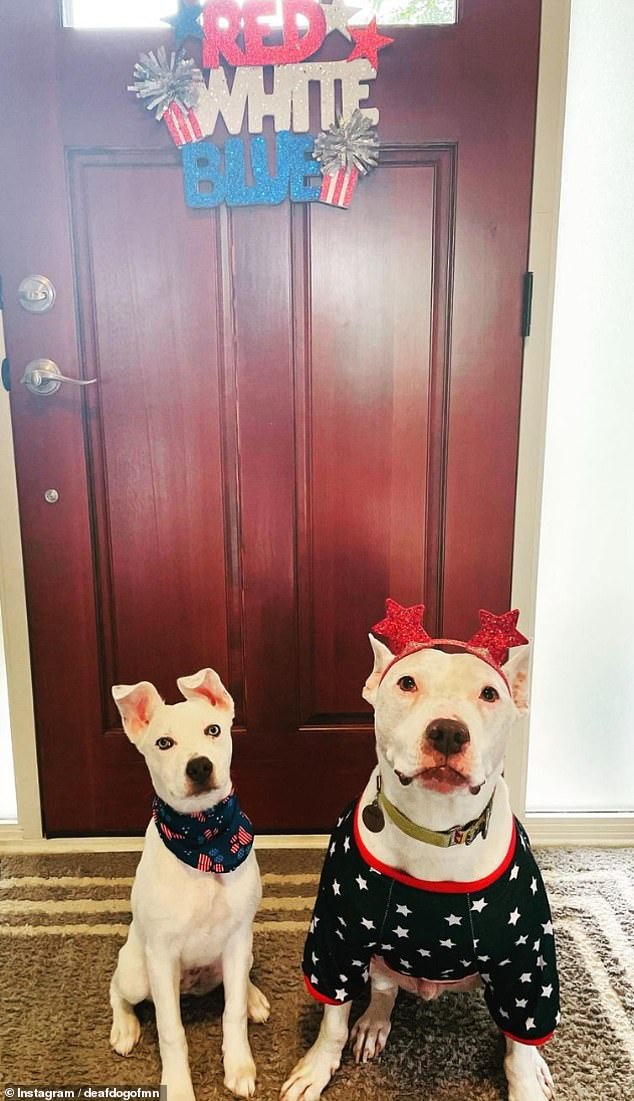 Faith, left, and PeeWee, right, putting on their best looks to celebrate the Fourth of July with Nikki 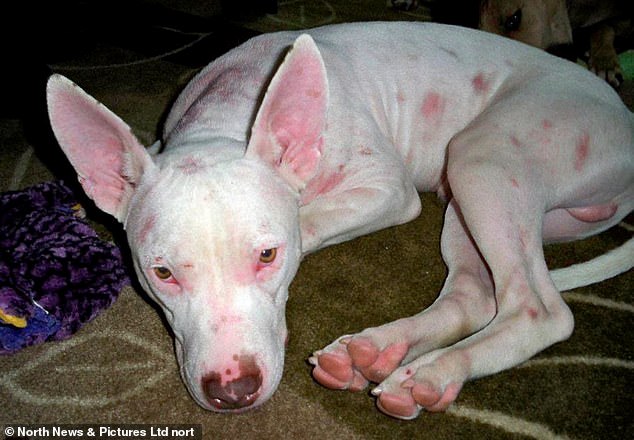 The puppy was in bad shape when he was rescued as a puppy, suffering from a severe skin rash