Nationals MP George Christensen has made two secret submissions to Australia’s privacy watchdog in an attempt to block media access to information about a now concluded police probe into his frequent travels to the Philippines.

For almost two years, Nine News, The Age and The Sydney Morning Herald have been trying under Freedom of Information laws to access a letter sent by the Australian Federal Police to then-Home Affairs Minister Peter Dutton on June 25, 2018. The letter advised it was closing the case into Mr Christensen, but warned the Nationals MP remained an ongoing risk of being compromised, according to sources who have seen the letter. 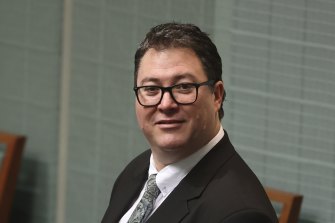 Mr Christensen was dubbed “The Member for Manila” by colleagues after it was revealed he spent 294 days in the Philippines between April 2014 and June 2018.

The police investigated his travel for more than a year, which included frequent visits to Angeles City – an urbanised area more than 80km north of the capital Manila which is known for its red-light district.

Former prime minister Malcolm Turnbull revealed in his book the AFP warned him Mr Christensen could be questioned in the Philippines by local police because of rising concerns about his payments to women and lengthy stays in “seedy” hotels.

The Queensland MP has attacked media coverage of his visits to the Philippines as a “vile smear” and insisted he did nothing wrong.

Mr Christensen’s “in confidence” submissions have been made to the Information Commissioner as part of a review of why police have refused to make the document public.

The police originally refused to release the letter under freedom of information laws because it would involve an “unreasonable disclosure of personal information” about Mr Christensen.

The decision was appealed to the Information Commissioner by Nine News and this masthead.

Since then, the Australian Federal Police has also argued releasing the letter could reasonably be expected to cause damage to the security of the Commonwealth, could compromise the provision of frank and candid briefings to the Home Affairs Minister in relation to sensitive matters and could prejudice the fair treatment of individuals.

Last October it also told the Senate that if the upper house was to request the letter it contained “sensitive information which would be subject to a claim of public interest immunity”.

The Information Commissioner has sought evidence from the Inspector-General of Intelligence and Security over what damage could be done to national security by releasing the letter.

The commissioner has also received a confidential submission from the police and two from Mr Christensen, which it will not release.

Independent senator Rex Patrick said the tactics deployed by the police were “disappointing” and “highly predictable”.

“You always start as an applicant with one arm behind your back because you’re not privy to the document your argument centres around. That situation is made worse in circumstances where you are denied the submissions. That’s tying your second hand behind your back,” Senator Patrick said.

“Prohibiting access to submissions should only occur in the most sensitive of situations and every attempt should be made to make a publicly available version,” Senator Patrick said.

Mr Christensen has maintained he does not want the document released. He did not respond to requests for comment.

The Australian Federal Police inquiry into his frequent travel found no evidence of criminal wrongdoing.

In a National Press Club address last year the Australian Federal Police Commissioner Reece Kershaw promised the organisation would “be transparent and be open with the community”.

“A police force without transparency is a police force at risk of corrosion and lacking moral fibre,” he said.