Does being overtly sexy hold women back?

Does being overtly sexy hold women back? As actress Helen McCrory warns against trying to be too sultry

Clare Foges (pictured) said women who want to get ahead in life should aim to be attractive, rather than sexy

Actress Helen McCrory has some words of advice for younger women in showbusiness: don’t make getting a part ‘dependent on your sexuality… because that’s not going to make it easier for the women behind you’.

Some may find these provocative comments a bit rich coming from a woman recently seen in BBC’s Peaky Blinders wearing a postage stamp-sized scrap of black lace. But she makes a good point.

When women — on or off screen — take pains to portray themselves as pouting, utterly desirable creatures, it reinforces some pretty narrow ideas of womanhood and does them (and other women) no favours.

Young girls are now bombarded from every angle with the nonsense that ‘empowerment’ means looking like a blow-up doll in endless revealing posts on social media.

This millennial brand of feminism is all about women ‘reclaiming’ the right to be sexy; the idea being that decades of shame and guilt meant women couldn’t ‘embrace their sexuality’. Thus, being overtly sexy is cast as something feisty and cool, a revenge on the patriarchy. So we are forced to hear actress Emma Watson gushing about a sex education website that improves her orgasms, or Jane Fonda boasting that she still uses vibrators.

Sadly for most of us, putting our sexuality at the forefront is not the best way to get on at work.

You can make the most insightful comments in a business meeting, but if you’re showing two inches of cleavage, minds may be elsewhere. Decades of women’s liberation has not rewired men’s brains to ignore female flesh. While it may be unfair, if a woman acts or dresses in a vampish way, it undermines her as a person to be taken seriously.

When Labour MP Tracy Brabin spoke in the House of Commons recently wearing an off-the-shoulder dress, it caused a furore. She later complained of ‘Victorian’ attitudes. But no one remembers what she was debating in Parliament that day.

This is the problem with women playing up their sexuality: it feeds the old sexist suspicion that women are best for looking at, not listening to.

We don’t all have to abandon make-up or dress in shapeless tweed. But if you want to get on in life, aim for attractive, rather than rip-your-clothes-off sexy.

As Audrey Hepburn said of the pressure to be sexy on screen: ‘There is more to sex appeal than just measurements. I don’t need a bedroom to prove my womanliness. I can convey just as much sex appeal picking apples off a tree.’

In other words, less is more. 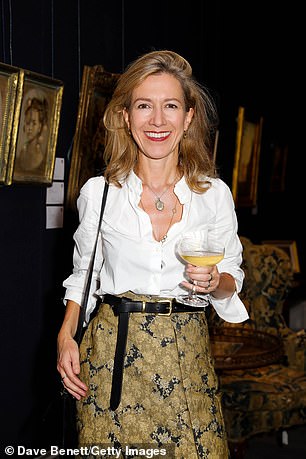 This advice from one of Britain’s most established screen stars isn’t as straightforward as it seems. Let’s look at Helen McCrory herself, for starters.

I vividly remember the thrill of first watching her 20 years ago, as she ignited the screen in a blaze of sexual torment playing Anna Karenina.

Noting the violet shadows under her eyes and exaggerated jut of her cheekbones, I realised what made her compelling wasn’t merely beauty, but the magnetic force of sex appeal.

When Keira Knightley played Anna Karenina in a later film, she wasn’t one jot as compelling.

The fact is, sexuality is as vital to Helen’s appeal as her fine stagecraft and intelligence.

No one wants to return to the days when actresses were told to disrobe for no good reason, but a feminist embargo on sexuality would equally distort our dramas.

Should we tell sexy women to tone it down in case it unsettles some people or puts undue pressure on the younger generation? That smacks of control and fear of female power to me.

This means that harnessing your sexual energy to your brain power and general charisma can help propel you across a world stage. Even Theresa May wore her kitten heels and a flick of feline eyeliner. In the rawest sense, it’s the high-voltage vixens who generate a lot of life’s turbulence — and this is the essence of interesting drama. Just look at this summer’s TV surprise hit, Normal People, which examines a torturous love affair.

Daisy Edgar-Jones’s portrayal of Marianne required simmering looks, nudity and explicit sex scenes. It was a masterclass in how it feels to be physically obsessed with another human and have that reciprocated.

So why should she rein it in? No one’s going to tell her co-star Paul Mescal that he shouldn’t play parts that emphasise his physique and sexual intensity.

I’ve gladly viewed Tom Hiddleston’s toned bottom on screen and I can’t believe it occurs to him that he should tone down the sizzle so younger actors aren’t objectified.

This is what true parity means: a woman should be able to express her sexuality with impunity, just like a man.