Dogs are NOT seven times as old as a human. study finds

How old is your dog REALLY in ‘human years’? Scientists say old adage of multiplying their age by seven is outdated – with many pups reaching adulthood by age TWO

The often uttered statement that one dog year is equivalent to seven human years is false, according to a canine expert.

Instead, the equation is more nuanced and depends on a dog’s cognitive and behavioral traits over time as well as its breed.

A new study reveals a dog becomes a teenager at just six months old, is a fully-fledged adult by the time it is two years old and is a ‘senior’ at around seven. 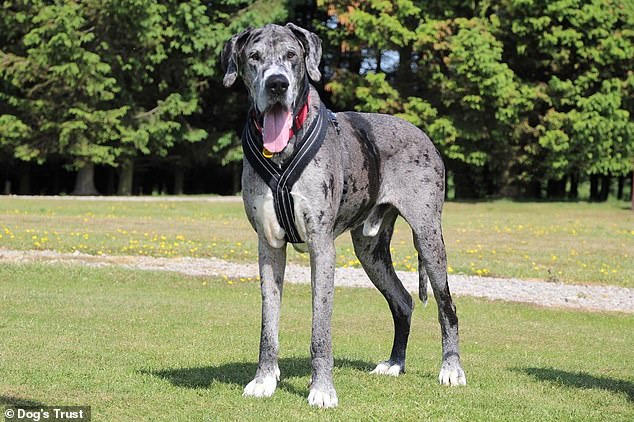 The often uttered statement that one dog year is equivalent to seven human years is false, according to a canine expert. Instead, the equation is more nuanced 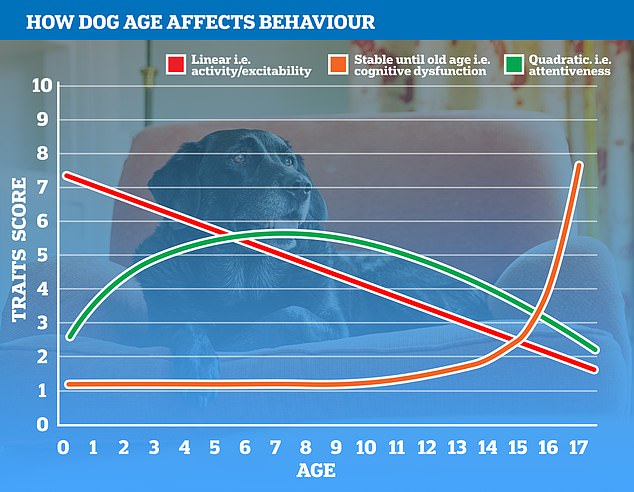 Pictured, how various metrics alter a dog’s behaviour over time. Green shows how the brain develops and then starts declining in senior years; orange shows how some traits, like cognitive decline, increase exponentially in a dog’s geriatric years; red shows the slow decline in a dog’s activity and attentiveness

A review of previous studies looking at the impact of dog age on pet health has been published in the journal Frontiers in Veterinary Science.

Dr Naomi Harvey, research manager at Dogs Trust and an academic at the University of Nottingham, conducted the review.

She says just because dogs live seven times shorter than humans does not mean each trip around the sun is worth seven for a dog.

‘Dogs mature more quickly than we do,’ Dr Harvey says.

‘Many one-year-old dogs have reached their full height and most will have gone through puberty or be approaching the end of it, so they’re definitely not the equivalent of a seven-year-old child!’

Pet owners are being warned of a surge of a highly contagious virus which can kill dogs and is spread through faecal particles.

Parvovirus is a stomach bug which infects dogs and leads to severe vomiting, diarrhoea and dehydration and, if left untreated, death.

Vets Now, an emergency service for ill animals in the UK, has seen a 129 per cent spike in parvovirus cases in the first three months of 2021 compared to last year.

Effective vaccines to the virus exist but almost half of dogs (45 per cent) are behind on their jabs due to lockdown delays, according to separate research.

Vets are now urging pet owners to make sure they do not fall behind on their pet’s jabs and to take caution when out and about to avoid potential sources of infection.

Instead of using the simplistic factor of seven equation, Dr Harvey sought to determine when a dog is a puppy, a juvenile, an adult, a senior and a geriatric.

Her findings show that a one-year-old dog is a juvenile just finishing puberty, and is akin to a 15-year-old human.

But just 12 months later, at two years old, dogs have reached full maturity in the same way as a 25-year-old person.

Dr Harvey found dogs can be considered to be entering their senior years at age seven and are deemed geriatric at age 12 and over.

The former is defined as being when the animal is older, but healthy, and the latter is when poor health and death become likely.

The research shows that aging is defined by various behavioural and cognitive traits and trends.

For example, a dog’s brain is still developing until it is around 7, after which its attentiveness declines, indicting it is now a senior pooch.

Geriatric dogs aged 12 may show signs of being in a bit more pain and also may suffer memory issues, akin to people with dementia.

In the UK, pet dogs live, on average, until they are 12 years old, but this varies by breed. For example, the average life expectancy of a Great Dane is just six years old.

However, while their health deteriorates quicker than other breeds, their brains and behaviour is aligned with all dogs.

‘But whilst their bodies may be impacted by health problems when they’re still young, there’s no evidence that short lived breeds are aging in the true sense of the word, as behaviourally they appear to be following the same trajectory as other dogs,’ Dr Harvey said.

‘In other words, short lived dog breeds are not aging faster, they are simply dying younger.’