Donald Trump Jr. keeps saying that he’s shadow-banned on social media, but there’s not much evidence backing up his claim 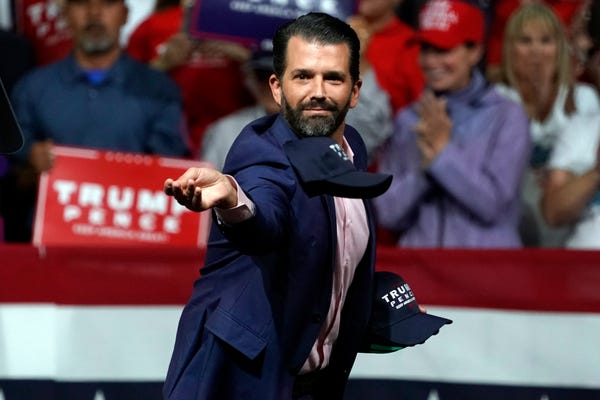 Donald Trump Jr. is claiming his own personal social-media accounts on Instagram and Twitter are being shadow-banned (slang for reach being suppressed without notification) as President Donald Trump alleges censorship by tech companies in the wake of The New York Post's Hunter Biden article controversy. But Trump Jr. is recycling the allegation, which he has frequently made in years past during his war with tech companies, and an analysis of his tweets show they've recently received higher engagement than normal.

In an Instagram video on Sunday, Trump Jr. said that he was watching his "algorithms get crushed" as his posts were reaching fewer users on the app. Laying in bed, Trump Jr. said he must have done something to "piss off the Instagram gods."

"In IG jail," the caption said. "Watching my post get about 20% of what they were getting last week so if you want turn on post notifications that way maybe you'll at least see my stuff." Trump Jr.'s posts on Sunday did reach about 60% of the likes he received on posts from the week before, Insider found.

In IG jail. Watching my post get about 20% of what they were getting last week so if you want turn on post notifications that way maybe you’ll at least see my stuff.

Trump Jr. appeared to be referencing the reach and engagement of his Instagram posts by saying his "algorithms" were being "crushed," a common complaint among Instagram influencers (including style, lifestyle, wellness, and other genres of influencers). Instagram feeds no longer appear in reverse-chronological order, and the app uses a mysterious algorithm to organize the content each user sees on their feed.

On Twitter, Trump Jr. also complained of potential shadow-banning from both platforms. "Twitter has been throttling my reach," he said in a tweet on Sunday, adding that his tweets were getting one-third of his usual retweets. "Instagram is doing the same & worse for the last few days."

Trump Jr.'s claim about his loss in Twitter engagement does not appear to be correct. According to Social Blade, a website that tracks social-media analytics, Trump Jr.'s tweets receive roughly 5,400 retweets on average. Many of his recent tweets have earned more than that.

There's no indication that Trump Jr.'s content has actually been deprioritized by platforms, and there are several other factors that play into one's engagement and reach on social media, including timing, quality, and algorithm changes or variability.

Trump Jr. has railed against tech companies for alleged censorship before

Conservatives have claimed for years, with little evidence, that tech companies are unfairly censoring their voices via algorithm.

A July 2018 Vice article alleged that Twitter had censored prominent Republicans, including Trump Jr.'s spokesperson, Andrew Surabian. The article was widely disputed by other outlets, including The New York Times, and a Twitter spokesperson said in a statement: "As we have said before, we do not 'shadowban.'"

Still, Trump Jr. made similar claims about Twitter and Facebook in May 2018, July 2018, and November 2019, including in his memoir.

In February, Instagram CEO Adam Mosseri said that "shadow banning is not a thing," adding that while being featured on the platform's Explore page is not guaranteed, followers of an account will be able to see any and all posts in their feed.

Beyond claims of a Twitter shadow ban, he has also had other brushes of trouble with the platform. Over the summer, Trump Jr.'s Twitter account was suspended for 12 hours for violating the platform's COVID-19 misinformation policy.

His recent complaints come after days of his father, President Donald Trump, and allies criticizing Twitter for blocking users from sharing the link to a highly contested New York Post article about Hunter Biden that has had its validity questioned.

Earlier on Sunday, Trump Jr. posted a doctored screenshot of a tweet that was blocked because it shared the New York Post story. The edited image showed Twitter's "Tweet not sent" notification saying that the tweet couldn't be sent because it was "potentially harmful to Joe Biden's campaign."

What’s been going on this week is insane. This is the stuff of Communist China. Big Tech has too much powers and they’re wielding it like a broadsword to destroy your freedoms and your voice.

In the post's caption, Trump Jr. wrote that "Big Tech" has too much power, "and they're wielding it like a broadsword to destroy your freedoms and your voice."

In August 2018, Democratic Sen. Chris Murphy of Connecticut said in a tweet that Facebook and YouTube banning Infowars' Alex Jones was the "tip of the iceberg" in platforms' work to rid their platforms of "hate and lies." Trump Jr. appeared to align himself with Jones, who is known for propagating the false conspiracy theory that the Sandy Hook elementary school shooting in Newtown, Connecticut, was a hoax.

"A Democrat Senator openly admitting that Big Tech's censorship campaign is really about purging all conservative media," he said, quote-tweeting the senator.

A representative for Trump Jr. did not immediately respond to a request for comment.