Economic rebound to become a grind as normality returns

The Australian economy’s rapid rebound out of the coronavirus pandemic will become a grind over the coming months, with forecasts the Reserve Bank will have to keep official interest rates at record lows for years to help support the jobs market.

Deloitte Access Economics, in its quarterly outlook on the national economy released on Monday, said while the economy was roaring back, it faced longer-term headwinds that would keep unemployment elevated and inflation muted until the middle of the decade. 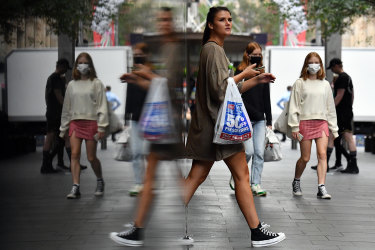 The strong recovery from the depths of the coronavirus recession is tipped to become a grind in coming months.Credit:Sam Mooy

After suffering the largest quarterly fall in GDP since the 1930s in the March quarter last year, the Australian economy has posted the strongest back-to-back quarters of growth on record. Last week, the International Monetary Fund upgraded its forecasts for the Australian economy, saying it expected it to grow by 4.5 per cent through 2021.

Deloitte, which compiled its forecasts ahead of last week’s decision by the Morrison government to preference the Pfizer vaccine over AstraZeneca’s in adults under the age of 50, expects the economy to expand by 4.9 per cent this year and 3.3 per cent in 2022.

Despite the strong growth, it expects unemployment to average 5.7 per cent this year and 5.3 per cent next year. The number of people out of work is not forecast to fall below 700,000 until 2025.

Wages growth, a major issue for the RBA, is also expected to remain subdued. Deloitte forecasts the wage price index to increase by less than 1.4 per cent for three consecutive years.

Deloitte partner Chris Richardson said as long as vaccines were able to deal with any coronavirus mutations, the Australian economy was on track to be close to pre-pandemic normal by Christmas.

“The big jump from Australia’s reopening economy will gradually ease from here, while emergency government assistance continues to fall way. That will see further catch-up growth become more of a grind,” he said.

Financial markets globally have started to price in the chance of interest rate rises on fears of a lift in inflation. This has pushed up interest rates on Australian government debt.

But Mr Richardson said with ongoing slack in the jobs market, unemployment and under-employment were unlikely to fall enough to enable workers to demand higher wages or give businesses the opportunity to increase their prices. 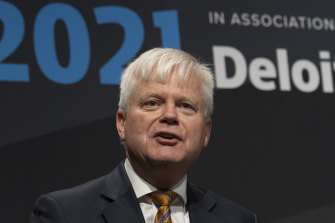 Deloitte’s Chris Richardson says those expecting a sharp lift in inflation, and higher interest rates, need to “take a Bex and have a lie down”.Credit:Louise Kennerley

There was little chance of the RBA lifting interest rates from their current record low level of 0.1 per cent until 2024.

“Unemployment is going to take quite some time to get down to the point that it gooses wages, wage agreements will take time to reflect stronger bargaining power, and prices will take time to fully reflect faster wage momentum,” he said. “If you’re hearing from those with the mindset that inflation is back, and sustainably here to stay, then we suggest you have a Bex and a good lie down.”

Westpac senior economist Andrew Hanlan is expecting the Australian economy to expand by 4.5 per cent this year and 3 per cent in 2022. Despite this, the economy would end this year 1.5 per cent smaller than if COVID had not eventuated, he said.

Mr Hanlan said consumer spending would be the main driver of economic activity this year and next.

“Spending by households rebounded by 12.4 per cent over the second half of 2020 as the economy reopened. That still left it 2.7 per cent lower over the year, including a 5 per cent drop across NSW and Victoria and a 0.7 per cent rise elsewhere,” he said.

Deloitte’s forecasts reveal the ongoing impact of the pandemic on different parts of Australia, with Victoria expected to take a long time to recover from the recession.

It is forecasting Victoria’s gross state product to contract for two consecutive years, 2019-20 and 2020-21, before starting to turn positive.

Get our Coronavirus Update newsletter

Stay across the news you need to know related to the pandemic. Sent Monday and Thursday. Sign up here.