Economists have defended the federal government's record levels of spending during the coronavirus pandemic following criticisms by a former deputy prime minister that too much debt had been accumulated without a sufficient plan for how to pay it back.

John Anderson warned on Friday the record level of spending amounted to inter-generational theft and called for major tax reform to pay it down in comments that were backed by a former prime minister and a previous Liberal party leader. 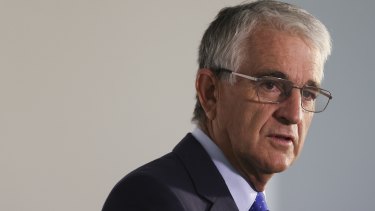 Kevin Rudd said stimulus measures should have been introduced in 2019 ahead of the pandemic because there were already signs the economy was starting to soften.

During the global financial crisis, when Mr Rudd was Labor prime minister, spending peaked at 26 per cent of GDP compared to 35 per cent currently.

"[Mr] Morrison's failure to focus his borrowing on productive infrastructure for the nation's future echoes the record of John Howard and John Anderson whose reckless spending during the mining construction boom was legendary," Mr Rudd told this masthead.

The Howard government, in which Mr Anderson served, was the last to deliver a budget surplus and clear debt. Australia’s gross debt is now set to reach $1.1 trillion by the end of the decade.

John Hewson, who was leader of the federal Liberal Party in the early 1990s, said he was concerned "about how easily [the government] made a transition from 'debt and deficit disaster' to this almost unbounded deficit spending".

"It is intergenerational theft," Mr Hewson said, adding the government had a unique opportunity to introduce wide-ranging programs, including in areas like climate change, aged care and education, but was dubious long-term reforms were on the cards.

PwC partner and chief economist Jeremy Thorpe said the cost to society of not running up debt through programs like the $100 billion wage subsidy scheme JobKeeper "was too high".

"We've learnt from the 1990s recession where a generation lost jobs or never got onto the workforce ladder. They suffered a generational theft of opportunity," Mr Thorpe said.

But he agreed there was an intergenerational cost if economic reform was not undertaken.

"We [lose a long period] of economic growth and don't get it back unless we commit to reformist agenda," he said, adding this including tax, regulatory and industrial relations reform but also better training and education.

Deloitte Access Economics partner Chris Richardson said he believed the public was broadly concerned about the level of debt but said although it was a "well-meaning fear" it did not stand up to scrutiny.

"The fact we ran up this debt fast benefits now, sure, but let's not forget there are longer term benefits too. The main reason to fight this recession hard is that recessions come with long-term scarring," Mr Richardson said.

"I am truly celebrating the things that are not happening. Right now there was meant to be an unemployment rate of 10 per cent, it's below 7 per cent. We didn't dodge all the scarring but we have great long-term benefits. People understand debt but they don't understand the enduring benefits for a whole generation of Australians."