Eight people at Barwon Prison are being assessed by paramedics after a brawl broke out inside the jail on Saturday.

Emergency services were called to the maximum security facility at Lara, south west of Melbourne, after reports of a fight shortly before 2pm.

It's understood two people will be taken to hospital for further treatment after suffering lacerations in the attack. 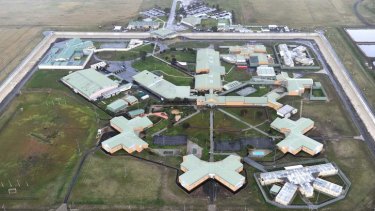 An aerial view of Barwon Prison near Geelong.Credit:Craig Abraham

It's the latest in a string of attacks inside the prison walls in recent months.

In February, a 26-year-old prisoner was hospitalised with serious injuries after being attacked by another inmate.

Then, in March, an inmate was hospitalised after suffering burns when boiling water was thrown on him during a fight.

It comes as the three neighbouring jails at Lara – Barwon, Marngoneet and Karreenga prisons – grapple with almost daily assaults on guards, prompting local police to assign all reports to a specialist detective.

Barwon Prison houses some of the state's most notorious prisoners including drug lords, killers and disgraced Cardinal George Pell, who will learn of the High Court’s judgement in his case on Tuesday.

All assault allegations are referred to Victoria Police for investigation.