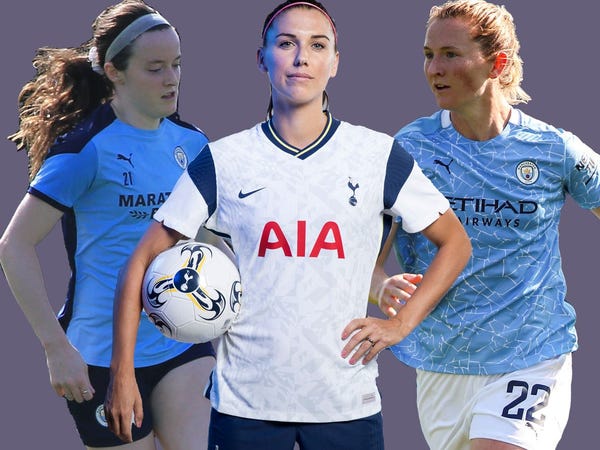 The US Women's National Team is headed across the pond.

No, they aren't playing a friendly against one of women's soccer's many power players in Europe. Nor are they readying for a big international tournament. Instead, a handful of USWNT stars are signing on with foreign clubs as COVID-19 continues to plague the United States.

Before the pandemic, all 23 national teamers played for teams in the National Women's Soccer League — a stateside league widely considered the best on the planet. But the ongoing coronavirus pandemic — and the United States' struggle to contain the spread — has rendered playing team sports more challenging and riskier than in other countries. As a result, eight national teamers have opted out of the NWSL's Fall Series — due either to injury or to health concerns — in addition to the six USWNT players who headed abroad instead.

Though all six stars playing overseas signed short-term deals with their new clubs, the shift could be the start of a larger trend of female footballers taking their talents to European programs that have demonstrated a commitment to investing in the women's game.

In the short term, their moves signify the importance of safe, competitive opportunities to play in the lead-up to next summer's Olympic Games in Tokyo.

The Americans could find themselves at a disadvantage given the state of affairs in the United States at the moment. While it is still unsafe for the USWNT to convene, other countries' national teams have been practicing — and even competing in front of sell-out crowds — in recent weeks, prompting USWNT keeper Ashlyn Harris to tweet about her own jealousy.

The USWNT is looking to salvage its early exit from competition at the 2016 games in Rio de Janeiro. That squad — helmed by then-head coach Jill Ellis — lost to Sweden in penalty kicks during the quarterfinal round. But with a new coach in Vlatko Andonovski and a squad fresh off of a dominant performance at the 2019 World Cup in France, the USWNT was seen as the frontrunner for the Tokyo Olympics back when they were scheduled for summer of 2020.

Whether the year-long delay of the games or the country's continued struggle to contain the virus' spread will impact the team's chances still remains to be seen.