EUROPEAN SUPER LEAGUE players could be banned from appearing at World Cups and European Championships.

Uefa and Fifa hit out at the proposed plans for the 20-team breakaway league – and suggested international repercussions for the individuals and teams that join. 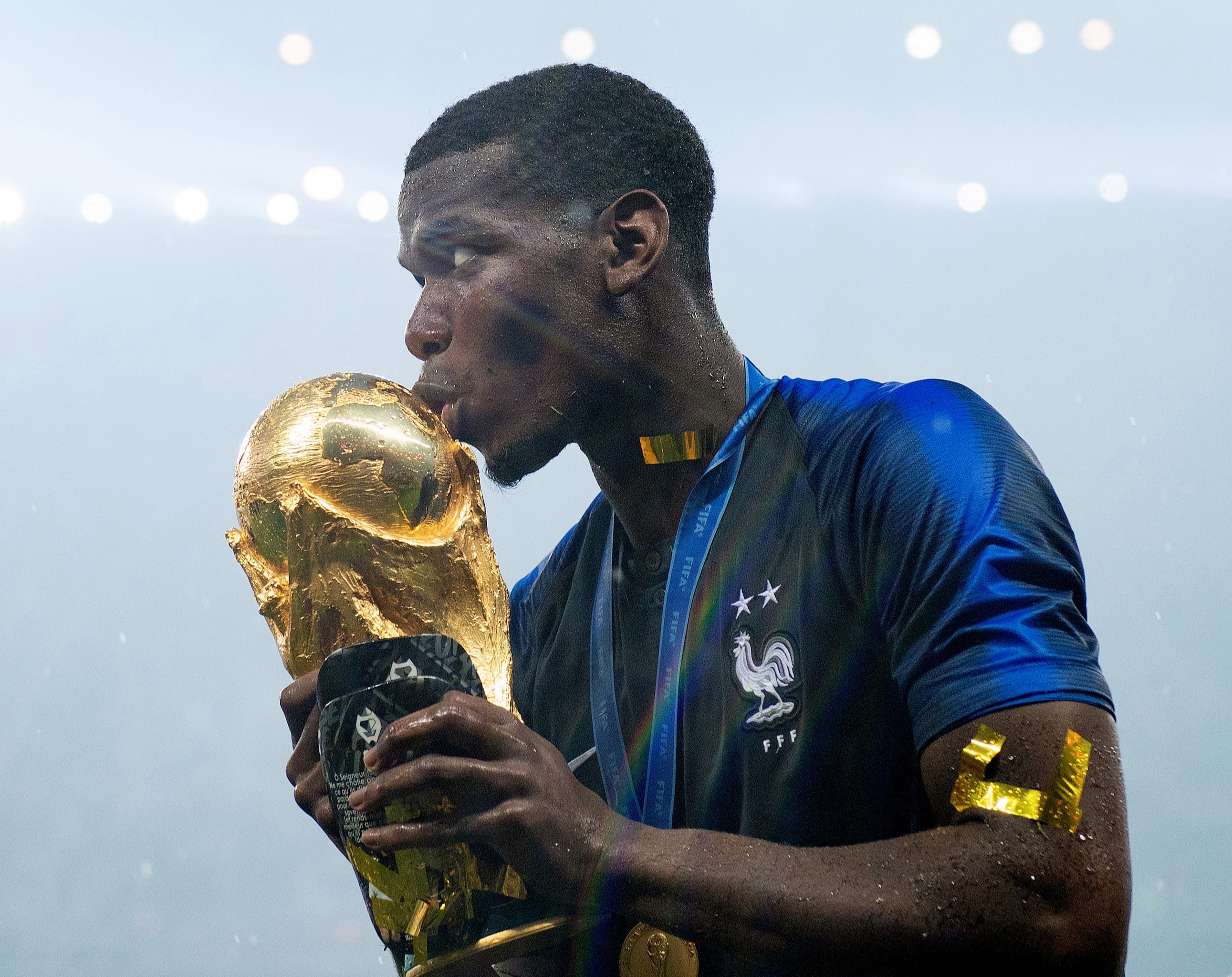 The Premier League's so-called 'Big Six' made up half of the 12 teams already signed up for the closed-shop franchise-style league, with no relegation and a split of the £4.6billion pot backed by JP Morgan.

They plan to expel the ESL teams from competing in domestic and continental football – such as the Premier League, FA Cup or Champions League – but could go even further by preventing the breakaway players to turn out for their countries.

Uefa, European football's governing body whose Champions League would be decimated by the ESL, said: "The clubs concerned will be banned from playing in any other competition at domestic, European or world level, and their players could be denied the opportunity to represent their national teams.

"We thank those clubs in other countries, especially the French and German clubs, who have refused to sign up to this. We call on all lovers of football, supporters and politicians, to join us in fighting against such a project if it were to be announced.

"This persistent self-interest of a few has been going on for too long. Enough is enough."

However, many felt Fifa's response was not strong enough – with some suggesting president Gianni Infantino may even be in favour of the European Super League plans.

How the new £4bn Super League would work

Their weak statement said: "Fifa wishes to clarify that it stands firm in favour of solidarity in football and an equitable redistribution model which can help develop football as a sport, particularly at the global level, since the development of global football is the primary mission of Fifa.

“In our view, and in accordance with our statutes, any football competition, whether national, regional or global, should always reflect the core principles of solidarity, inclusivity, integrity and equitable financial redistribution.

“Against this background, Fifa can only express its disapproval to a 'closed European breakaway league' outside of the international football structures and not respecting the aforementioned principles.

“Fifa always stands for unity in world football and calls on all parties involved in heated discussions to engage in calm, constructive and balanced dialogue for the good of the game and in the spirit of solidarity and fair play.

“Fifa will, of course, do whatever is necessary to contribute to a harmonised way forward in the overall interests of football.”

How would European Super League work?

THE European Super League will be made up of fifteen 'founder members' – starting with Arsenal, Chelsea, Liverpool, United, City and Spurs from England, with Atletico and Real Madrid, Barcelona, Juventus, AC Milan and Inter Milan.

Bayern Munich, Borussia Dortmund and PSG are likely to complete the list founders, who cannot be relegated.

Five extra teams will be invited to compete each year with a provisional kick-off from the start of the 2022-23 season.

Teams will be split into two groups of ten and play nine opponents home and away in a midweek league, with the top four from each group qualifying for end of season play-offs.

United and Liverpool will bag up to £310m up front. The other four Prem teams would each get £200m.

Total £4.6billion pot, initially backed by JP Morgan will mean a minimum £130m each year even if one of the 'founders' loses EVERY game.

Overall winners could earn up to £212m extra if they win every game.

The ESL could start as early as next season with plans for 23 years of the competition already in the pipeline.

Five clubs will be entitled to qualify every year, with the season running from August to May.

All matches will be played in midweek slots, with the clubs insistent they will be able to continue to play in their domestic leagues and “preserve the traditional domestic match calendar which remains at the heart of the club game”.

The 20 clubs will be split into two groups of 10, playing 18 games – nine home and nine away – with the top three in each group qualifying automatically for the last eight knock-out stage. 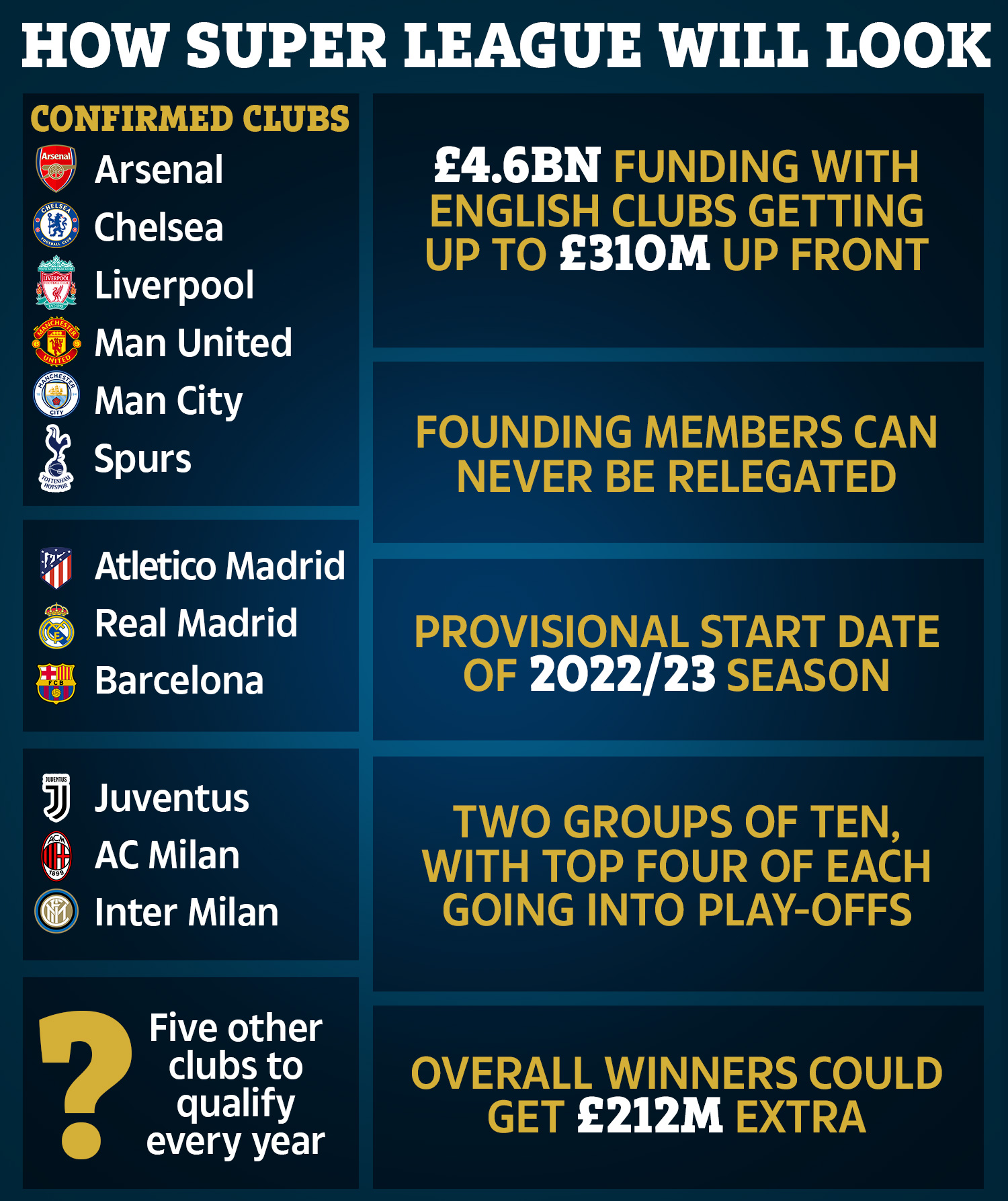