ANTONIO CONTE knows better than anyone that Rome was not built in a day.

But the task he faces at Tottenham is looking comparable to repainting the ceiling of the Sistine Chapel. 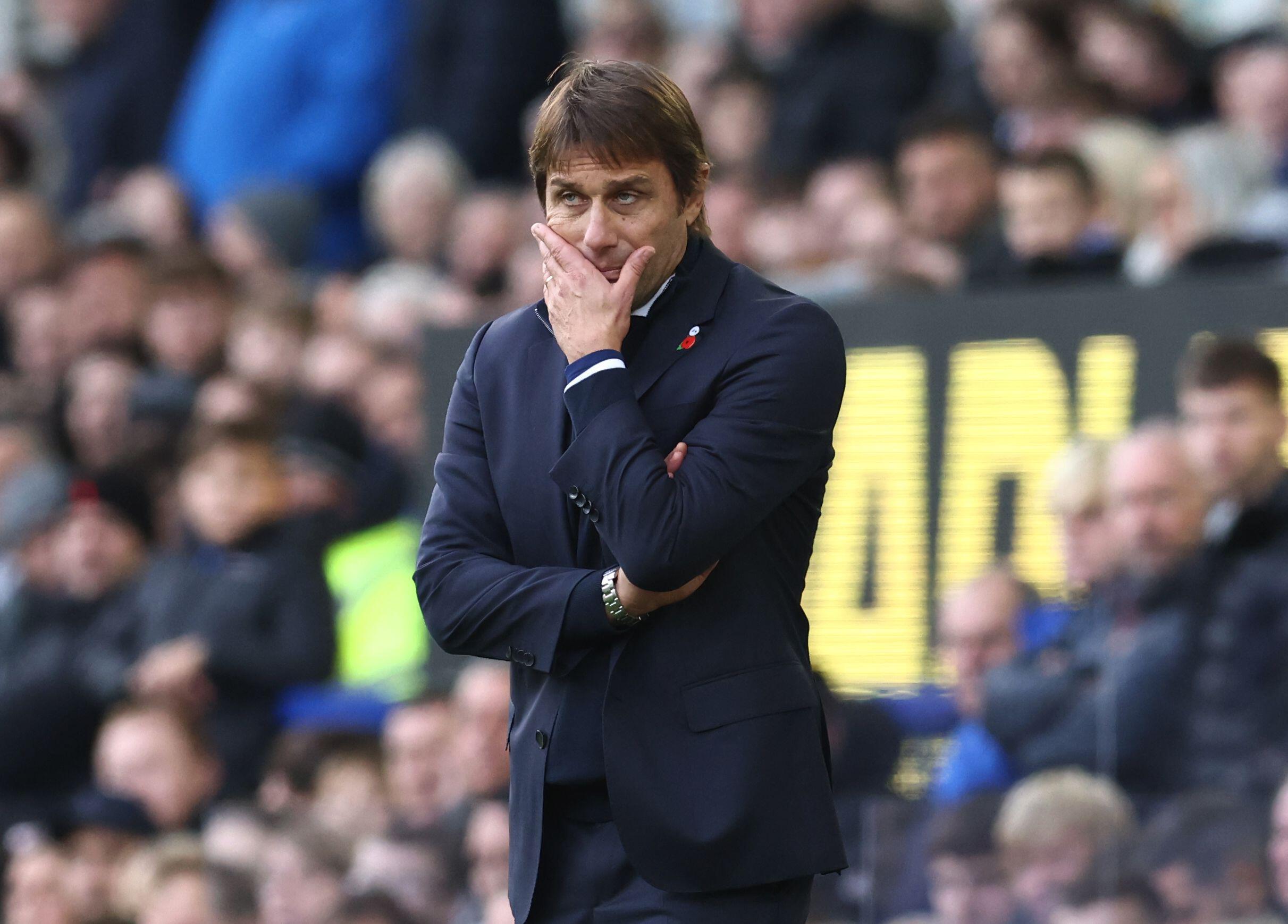 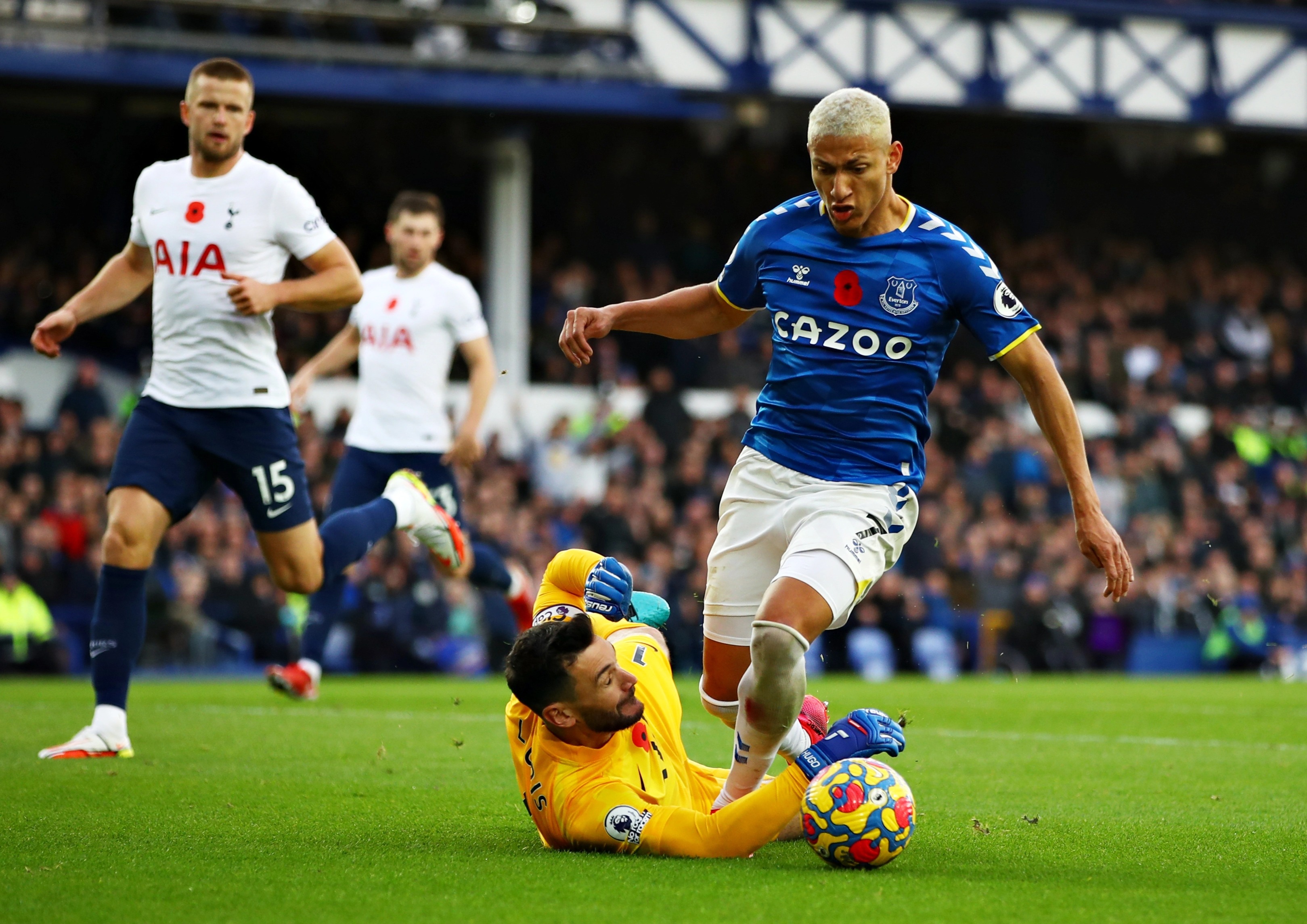 But it backed up his repeated warnings for patience and that restoring the North Londoners to former glories is going to be no quick fix.

A little over five years to the day since he guided Chelsea to a 5-0 win over Everton at Stamford Bridge, Conte found the going much tougher here.

And only a controversial, Everton would say farcical penalty U-turn by ref Chris Kavanagh and VAR Jon Moss saved Conte from possibly going behind.

The hosts thought they had been given the chance to open the scoring when Kavanagh pointed to the spot in the 61st minute after Richarlison had been felled by keeper Hugo Lloris.

It was a tight call with TV replays seemingly inconclusive.

So no clear and obvious error, right?

As after being summoned to the pitchside monitor by his Stockley Park colleague Moss, man in the muddle Kav changed his mind and reversed his decision.

Much to the fury of Everton manager Rafa Benitez, their players and fans, who were even angrier when a replay of the incident was inexplicably shown on a big screen inside the stadium.

Their mood was hardly lightened when Moss advised Kavanagh to upgrade stoppage time yellow card he gave to Toffees sub Mason Holgate for a wild follow-through on Pierre-Emile Hojbjerg.

Until all this, the only thing worth watching had been Conte.

What a shame his team were not as entertaining as he was on the touchline. 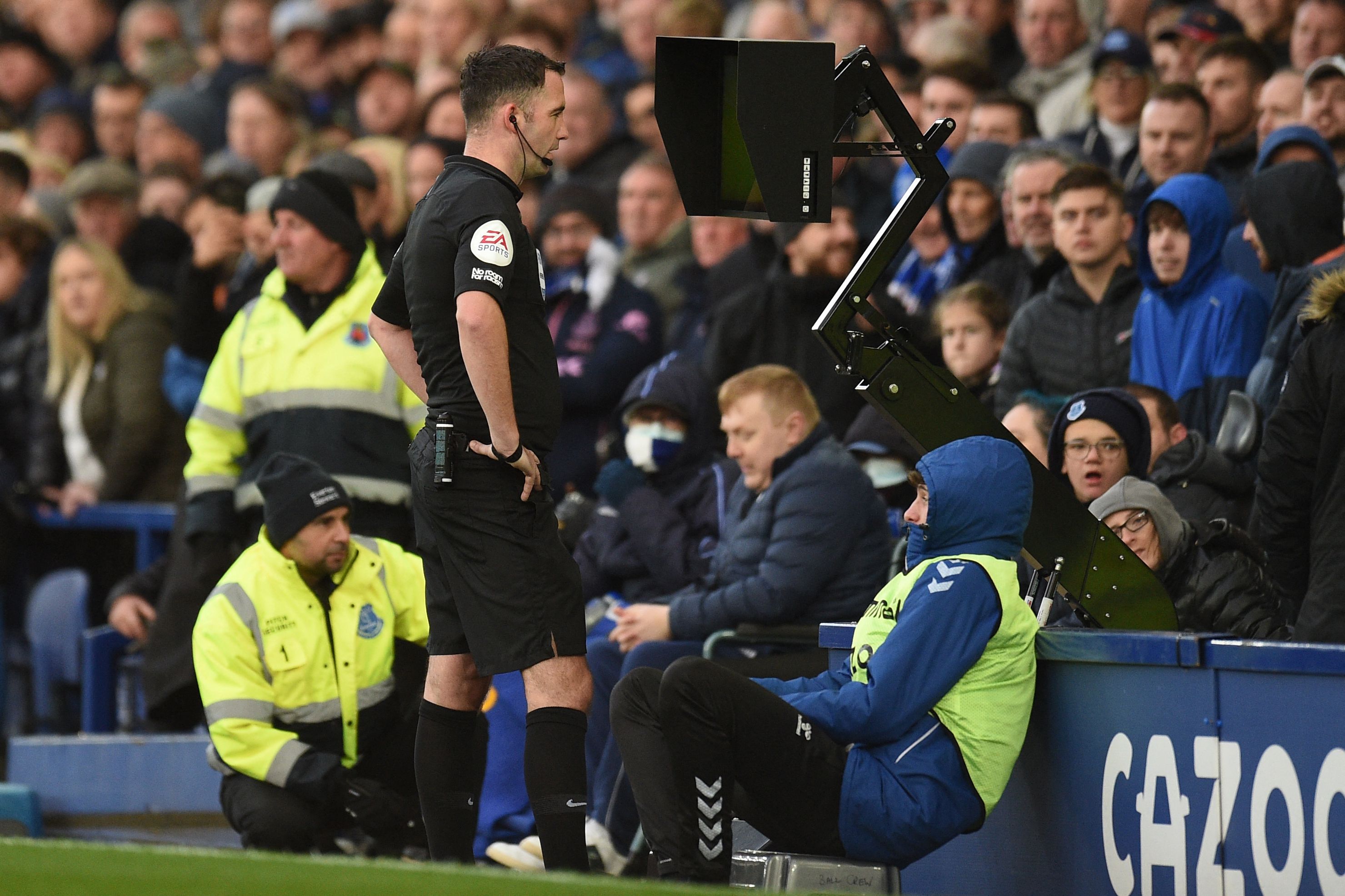 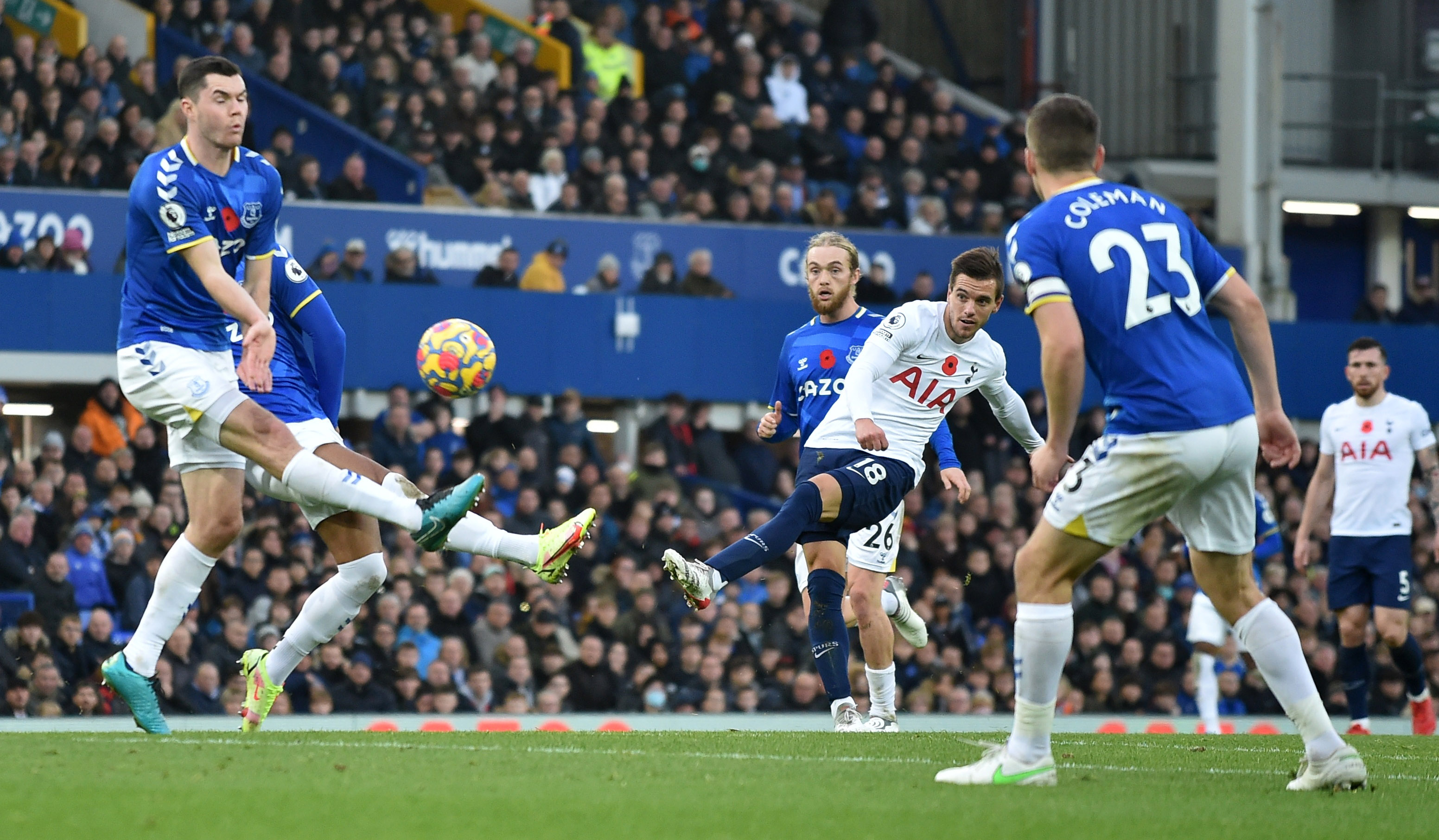 The intense Italian was fizzing around the technical area like a Roman candle.

So much so fourth official Anthony Taylor had to warn the Spurs chief for continually straying into Bentiez’s zone.

Just like then, here they showed lots more energy but very little effectiveness.

Nonetheless Conte will be pleased with the clean sheet which means he has not conceded a goal in any of his five Prem meetings with the Merseysiders.

Although he still has a lot of work to do with his defenders to get them to adapt to his favoured three-at-the-back system.

At the other end, there is no doubt Harry Kane is looking far more interested these days. 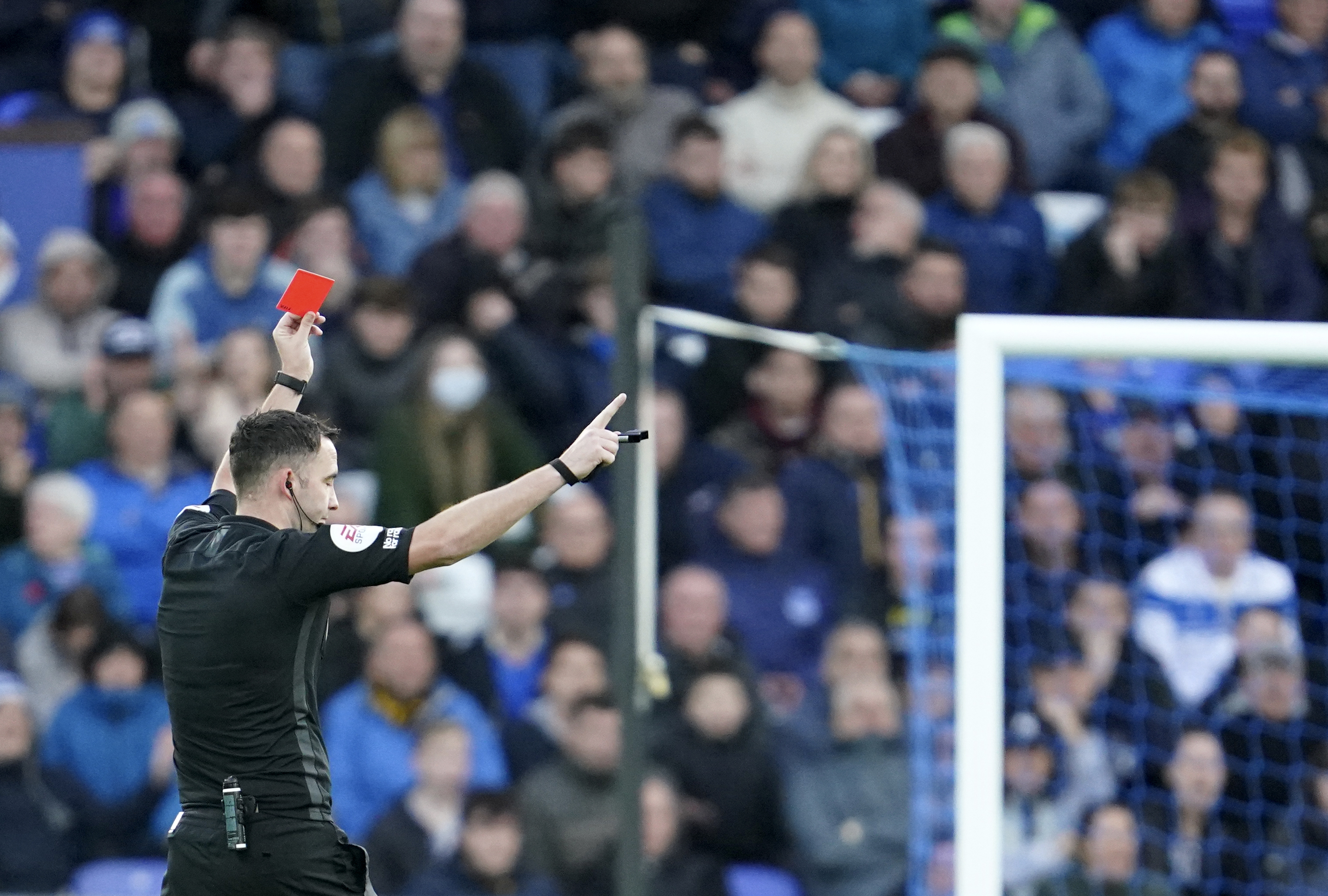 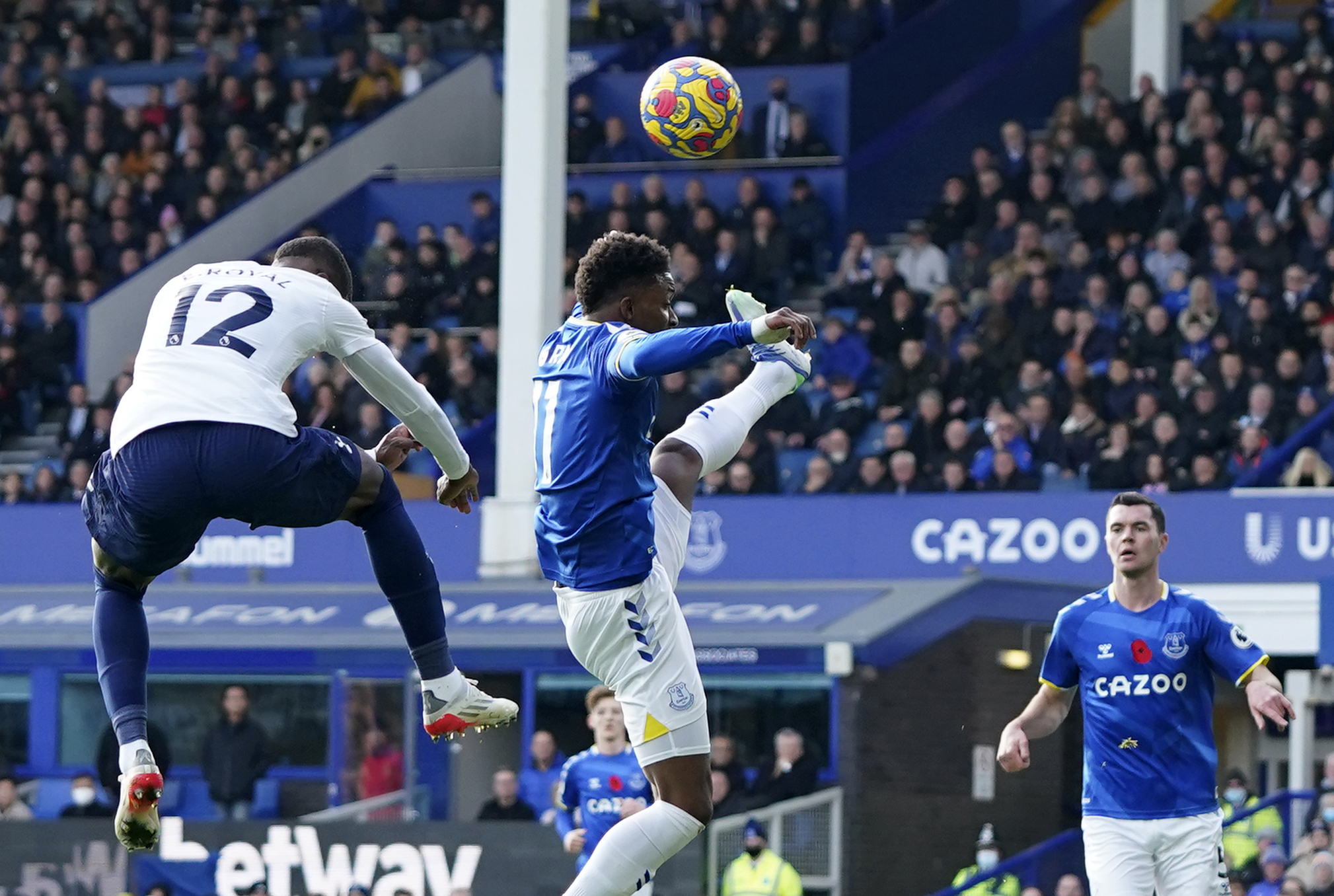 But it was another dry afternoon in front of goal for the England captain.

As for Everton, this draw stopped the rot after three successive defeats.

The first half was a stinker with only one effort on target.

And Ben Godfrey’s sixth minute shot from distance was so weak Spurs keeper Hugo Lloris could have thrown his cap on it.

It set the tone for a scrappy 45 minutes of few chances, with Toffees defender Micheal Keane heading Fabian Delph’s cross over at the far post.

Godfrey was lucky to escape a card for kicking Son in the ribs as he tried to get the ball after fouling him.

We had to wait 22 minutes for Tottenham’s first real attempt at goal as Emerson Royal headed Sergio Reguilon’s cross over the bar when he really ought to have hit the target.

Demarai Gray then tried to claim a penalty for Everton after his mazy run into the box ended with him going to ground under a challenge from Oliver Skipp.

But ref Chris Kavanagh and VAR Jon Moss were having none of it.

Spurs should have gone into the break in front but Sergio Reguilon half-volleyed Harry Kane’s cross into the Gwadlys Street stand.

Everton created the first chance of the second half but again the goal remained unthreatened as Anthony Gordon blazed over from Gray’s centre.

Defender Ben Davies then drove a 25-yard shot narrowly wide of the top corner for the visitors – before the penalty drama.

That spiced things up a bit and Richarlison and Cristian Romero were soon rutting like a pair of old stags.

Gray then missed a great chance when he side-footed wide from eight yards.