EXCLUSIVE: Football fans will need a two-jab Covid vaccination to attend matches with capacities above 16,000 from the end of September IF infection rates stay dangerously high, as Prime Minister Boris Johnson moves to protect the NHS in the autumn

Plans are being drawn up that will require football fans to prove they have had two doses of Covid vaccination before they can attend matches from the end of September.

Prime Minister Boris Johnson announced last night that everyone who wants to go to a nightclub in the autumn will have to be fully vaccinated.

And he indicated that ‘other venues where large crowds gather’ could also be made to adopt the checks.

Sportsmail understands that would include football matches and other sports events.

If the measure is introduced, Government would be expected to fall back on the previous definition of ‘large crowds’, set out in step three of the roadmap out of lockdown, which was a capacity of 16,000 spectators.

However, the legal requirement on football fans to be vaccinated before they attend games – a negative Covid test would not be enough – will only come into force if coronavirus infections rates, deaths and hospitalisations are high or there are dangerous variants circulating. 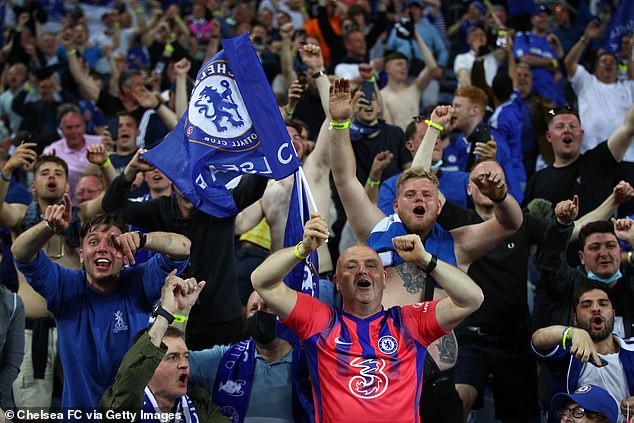 Government has been encouraged by the results of the early phases of the Events Research Programme, which revealed few infections linked to outdoor sports events.

Does the Delta variant spread outdoors easier than the original strain?

It is ‘very difficult to tell’ whether the Indian ‘Delta’ variant spreads better outdoors than other strains, an expert said today.

Officials have warned Britons against socialising indoors with people outside their household, saying this is the main way the virus spreads.

But they have said it is much safer to meet outdoors, because the circulating air blows virus particles away if one person is infected.

Dr Julian Tang, a virologist at Leicester University, told MailOnline it was hard to estimate whether the mutant strain spreads better outdoors.

But he said if someone was in a crowd outside and surrounded by other people who are infected they may be more at risk.

The virologist said: ‘If you are in a crowd like Wembley or Wimbledon and you are exposed to eight people around you that are carrying the virus and dont know it, on a still and cloudy day you may be more exposed.’

He said the weather outdoors was a key factor in how well the virus transmits outdoors.

‘Cloudy days when there is no wind are more of a risk,’ he said. ‘Sun rays have a direct effect on the virus.’

Studies show sunshine ‘kills’ virus particles, hampering its transmission. But this doesn’t happen when there is cloud cover.

However, results from the latest phase, which included much larger capacities at the Euro 2020 final and semi-finals are yet to be analysed and published.

The the scientists remain cautious about large gatherings in the autumn and winter, when respiratory infections tend to flourish, if high levels of the virus are circulating.

While the risk to a supporter sat in their seat watching the game is considered minimal, there is a risk in travelling to matches by public transport and in congested areas within the stadium, including concourses and toilets.

Both the Premier League and EFL are understood to be seeking clarification on last night’s announcement.

The Prime Minister’s willingness to enforce the requirement for Covid vaccinations by law, goes some way to meeting the demands of the Premier League.

It has repeatedly called for the use of Covid Passports to maintain large crowds in the autumn and winter, even if the virus surges, as well as asking for a consistent approach.

However, the top flight, the EFL and other sports have said the passports should include proof of vaccination, but also evidence of a negative test of natural immunity from previous infection, in order to give everyone, the chance to attend the game.

The Prime Minister has taken a tougher line with nightclubs, which have been linked to higher levels of infections in test events.

Mr Johnson, who is self-isolating at Chequers, said: ‘As we said last week, we do reserve the right to mandate certification at any point if it is necessary to reduce transmission.

‘And I should serve notice now that by the end of September – when all over-18s will have had the chance to be double jabbed – we are planning to make full vaccination the condition of entry to nightclubs and other venues where large crowds gather. Proof of a negative test will no longer be enough.’

And a similar approach would be extended to sport, if deemed necessary.

Regardless of any legal requirement for vaccination, Government has already issued extensive guidance to event organisers, including football, on the measures it would like clubs to take now.

One source close to discussions on the return of fans said that ‘if it’s in the guidance, you can expect to see that in football grounds’. 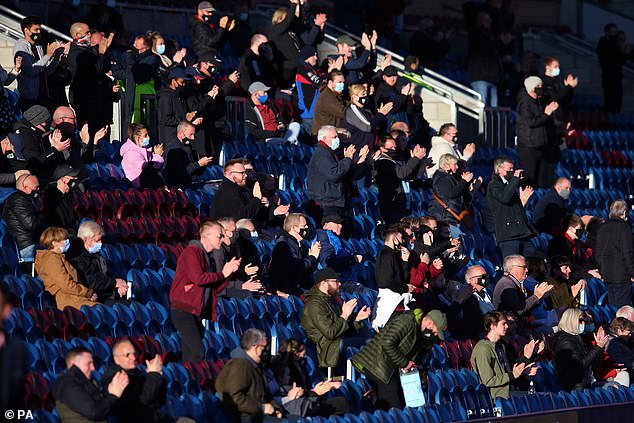 Up to 10,000 fans were allowed to return to Premier League grounds at the end of last season 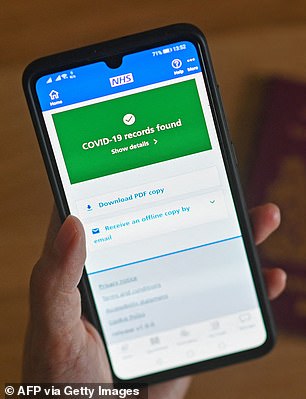 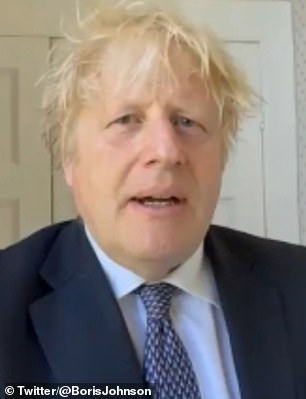 On that basis, fans of Premier League sides can expect Covid Passports, which currently comprise proof of vaccination, a negative test or natural immunity from previous infection; use of face masks and other measures, such as timed entry to stadiums from the first round of matches, which begin August 13.

Government accepts that not all top flight clubs will be ready with all aspects of their Covid plans from that date, but there is satisfaction that the Premier League is working through the issues.

The situation in the EFL is more complicated and unclear, where there are a huge range of capacities.

The EFL season begins on August 7. Clubs will be working with local authorities, including transport officials, emergency services and public health staff, which form local Safety Advisory Group, to set capacity limits as they are required to do for every game. 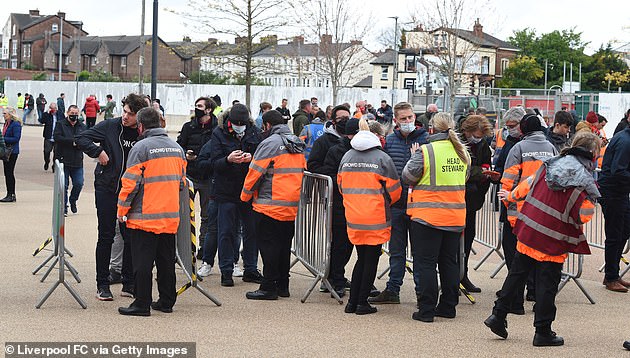 More than 60,000 fans were at the finals and semi-finals of Euro 2020 at Wembley earlier this month, with supporters at six England matches in London, overall.

The later events were testing the effectiveness of Covid Passports. 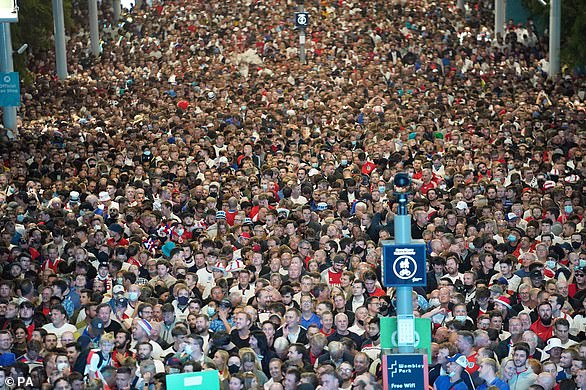 Spiralling Covid cases come after fans clumped together to watch the Euros at Wembley Stadium (above) where they were pictured without masks and with scant regard for social distancing, and in pubs and homes across the country

The events will be studied by Government scientists to examine the spread of the virus and success of mitigation measures, but some scientists have already blamed the football tournament for driving a surge in Covid cases, as fans came together, not just in the stadium, but also pubs and homes.

Public Health England data showed 10,267 more young men than women were infected in the two weeks since the tournament kicked off, with the gender gap having widened

Experts have also speculated England’s cases could start to fall after the national team’s dramatic defeat to Italy on penalties in the final last Sunday. Scotland saw its outbreak start to fall when it crashed out of the competition early. 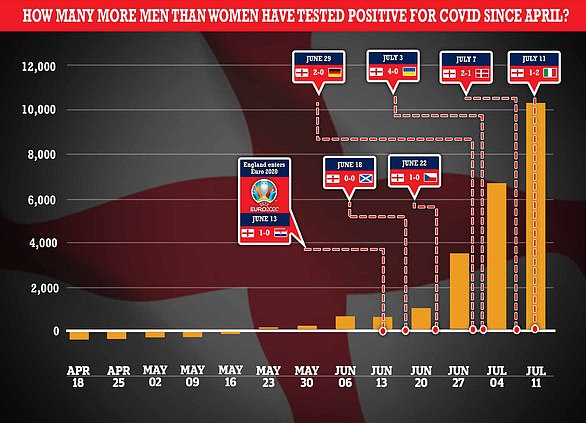 Public Health England data showed 10,267 more young men than women were infected over the last two weeks, with the gender gap having widened since the tournament kicked off

Public Health Scotland said two thirds of the 1,991 cases were people who travelled to London for Scotland’s game with England on 18 June.

This included 397 fans who were inside Wembley for the match. A relatively small number of cases reported attending the Fanzone in Glasgow, or Scotland’s two home matches at Hampden.