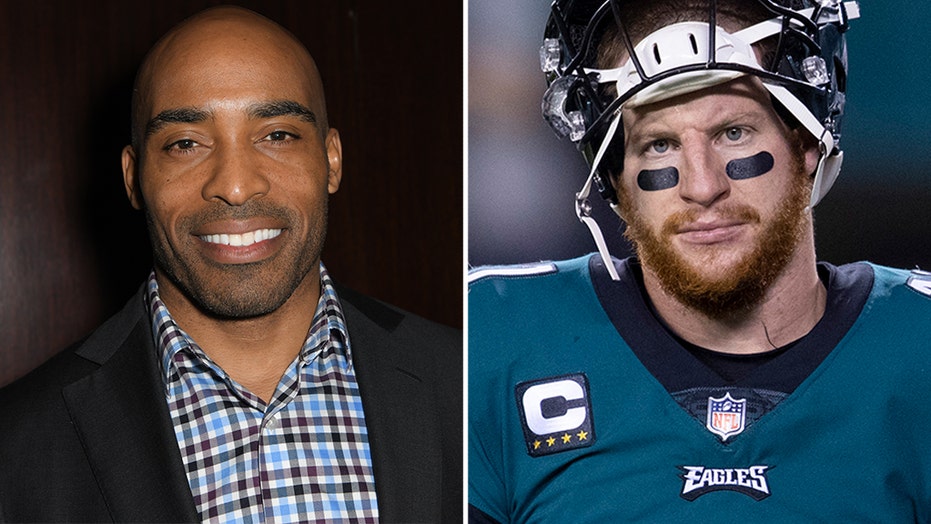 Former New York Giants running back Tiki Barber fired shots at Philadelphia Eagles quarterback Carson Wentz on Monday after reports came out that said Wentz was unhappy with being benched in favor of rookie Jalen Hurts.

"Carson Wentz is being perhaps the worst teammate you could possibly be — ever," Barber said during the "Tiki & Tierney" show. "Here’s the problem: there is a narrative around Carson Wentz that as good as he is or potentially could be, he’s just never been able to be the man. It puts the Eagles in an utterly impossible position."

On Monday, Eagles head coach Doug Pederson announced that Hurts will once again start against the Dallas Cowboys in their Week 16 matchup. It will be Hurts’ third-straight game starting under center for Philadelphia.

"If they make this change and Carson Wentz, who got a $128 million extension last year — and they can’t trade him because of the cap hit — if they make him the starter, it creates chaos in your locker room," Barber said. "Because all of a sudden these guys are going to be saying, ‘We don’t want to go win now? We don’t value a guy going out and balling? Being put in a very difficult and odd circumstance — like Jalen Hurts was — taking over for the franchise quarterback and he did nothing but perform, and now you’re going to bench the guy? What the hell?’"

Barber continued: "You can’t do that. But if you acquiesce to Carson Wentz and put Jalen Hurts back on the bench — or even trade him — you create this feel of weakness or incompetence because why the heck did you pay [Wentz] that much money and then draft Jalen Hurts in the second round, [which] disrupted his psyche and his confidence? It’s almost your own fault."

The Eagles (4-9-1) are currently in last place in the NFC East. They will face the Cowboys (5-9) and end the season against the Washington Football Team (6-8).

"It’s put the Eagles in a no-win situation," Barber continued about the quarterback drama. "The only thing that can help this is Carson Wentz has to come out and say, ‘Jalen Hurts is playing great, he deserves to start right now, we’ll have a great quarterback battle next season.’ He needs to say something like that. Otherwise, this thing could get really, really ugly and disruptive and divisive in the locker room and in the front office."