Whether it's navigating a first date or an inordinate number of decorative cushions, Australians are right now spoiled for choice when it comes to reality television.

Network 10 is airing its eighth season of The Bachelor Australia, Nine (the owner of this masthead) has renovation program The Block while Seven has opted for something a little different this time around with its new cooking show Plate of Origin.

This week on The Televisionaries podcast, our in-house experts talk about Australia's current crop of reality TV shows. For Green Guide critic Debi Enker, it's all about good casting. 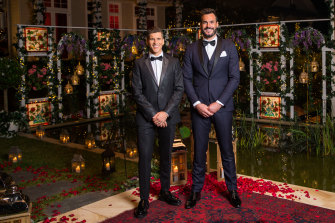 "It's about conflict," Enker says. "You need to get involved with the characters … and you need to care about what happens to them and what happens next. But there is an element of looking at it from a safe distance and being very critical."

Host Louise Rugendyke agrees, saying she loves to unwind with episodes of The Bachelor for this very reason.

"It's so undemanding and it's got nothing to do with my life," Rugendyke says. "I'm not comparing my house to [what's on screen]. I don't need to aspire to it. So I can just sit there and judge people. Which I know is awful. But that's the main pleasure of it."

Enker says she's been watching The Block, which is in its sixteenth season. That longevity amounts to "incredible survival", Enker says, noting that the series was created locally.

"Because that's what this is but they've sort of tried to dress it up as this competition," she says. "[The judges] don't do much, do they? It doesn't feel like there's enough."

Later in the episode, the critics discuss ABC series Back in Time for Dinner and test their knowledge of other reality formats. They also look back to a famous British documentary series that started in the 1960s.

Previous episodes of The Televisionaries unpack the historical comedy The Great, the true crime series I'll Be Gone in the Dark and Netflix’s hit documentary Tiger King.