The Victorian government avoided scrutiny on its wide-reaching state of emergency powers last year through a technicality, an independent group of lawyers has found.

As the Andrews government privately negotiates specific pandemic laws to permanently replace the state of emergency when it expires in December, the Centre for Public Integrity has urged it to guarantee Parliament’s ability to review executive decisions and reverse them if they are seen to be excessive. 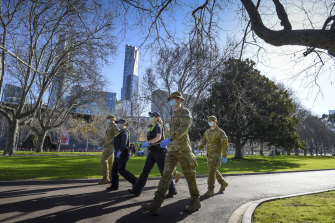 State of emergency laws have been active in Victoria since last March as the legal instrument that allows authorities to enforce a range of public health commands, including lockdowns, mandatory mask wearing and 14-day quarantine. The controversial snap lockdown of nine public housing towers last year was only possible under state of emergency powers.

New research by the Centre for Public Integrity found the powers granted to Chief Health Officer Brett Sutton enabled the creation of directions that should have been subject to parliamentary oversight, like new laws, because of their significant impact on Victorians’ daily lives.

The government directions should have followed existing scrutiny rules that would mean they must be tabled in Parliament, be reviewed by a cross-party committee and be reversible, it found.

Instead, the Victorian government characterised the directions as “administrative” until December last year, meaning Parliament had no say in their creation – a streamlined process that Labor MPs said was necessary considering the fast-moving challenges of the coronavirus pandemic.

The government then amended the relevant act to specifically exclude public health directions from scrutiny processes.

Centre for Public Integrity executive director Han Aulby, who uses the honorific Mx, said Victoria’s new laws, which The Age recently revealed will apply to all future pandemics and not just COVID-19, must reinstate independent scrutiny in Parliament to “rein in executive power”.

“Major decisions affecting the lives of millions of Victorians have been made without any accountability mechanisms in place,” Mx Aulby said.

“Any long-term pandemic laws must ensure that health directions are tabled in Parliament, scrutinised by the relevant committee, and subject to disallowance.”

Mx Aulby said Parliament should always be the source of major laws, particularly during an extended crisis. 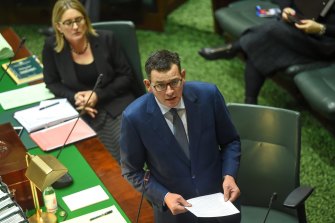 Powers enforced by Premier Daniel Andrews’ government have not been subject to scrutiny in Parliament.Credit:Justin McManus

“Increased executive power in times of crisis must be met with sensible and democratic oversight.”

A Health Department spokeswoman did not respond to questions on why the government amended the act to exclude public health directions in December, but said new laws later this year would “update and streamline key parts of our pandemic response”.

“We’re working with key stakeholders including Parliamentary crossbenchers to inform the development of this change and ensure Victoria’s approach is best practice in comparison with other jurisdictions and complements our existing and emergency management frameworks.”

In response to an unsuccessful opposition motion in October that demanded all public health directions be analysed by the same panel that scrutinises bills that pass through Parliament, Labor MP Mark Gepp criticised the Coalition for wanting “this place to sit in judgment on every public health decision that is made by our public health officials, who act on the best scientific evidence and advice”. 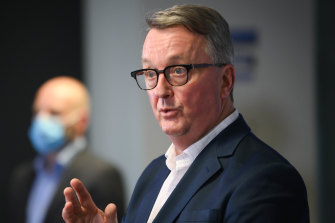 Health Minister Martin Foley’s department is negotiating the new pandemic laws to be in place by December.Credit:Eddie Jim

Gabrielle Appleby, a professor of public law at the University of NSW, said state and territory governments across Australia had encountered similar struggles between the urgency of public health directions and proper scrutiny over the past 16 months.

”You have a situation where the government has been given emergency powers, but the accountability measures have been left behind,” she said.

“So you are left with these old scrutiny safeguards that are a bit clunky, a bit slow, while the government has these agile powers that it can wield really significant control over people’s lives with.”

Professor Appleby said the new legislation could adapt an existing parliamentary committee, use a different agency such as the Ombudsman or create a new one to review the government’s actions during a pandemic or similar emergency.

“There should be a review avenue for any individual who feels there has been an unjustified incursion into their personal liberties,” she said.

“My major concern is that we don’t just replicate what we know are the clear shortcomings in transparency and accountability of the current legislation.

“We know the government has to respond quickly, we know some of those responses are going to require incursions into personal liberty. But we also know that under the current laws, the basis on which those responses are made and their proportionality to the risk are not being subjected to robust scrutiny.”

Among the trio’s demands are that police record the racial appearance of people they stop or fine for breaching health directions and that the government is forced to be more transparent with advice behind interventions such as lockdowns.

Under an agreement struck with Mr Meddick, Ms Ratnam and Ms Patten in September to extend the state of emergency for six months, the government agreed to table a monthly report on why the powers remained necessary. However, Parliament cannot reverse or amend the government’s decisions.