The roiling debate this week over taxing, spending and the state of the budget has sharpened the dilemma facing the Albanese government. Boiled down, it has started publicly deliberating on whether to break its election promise of fully implementing the stage three tax cuts as legislated in 2019 by the Morrison government. The calls for it to do so are based on fairness: the vast bulk of the benefit of these cuts flow to high-income earners. 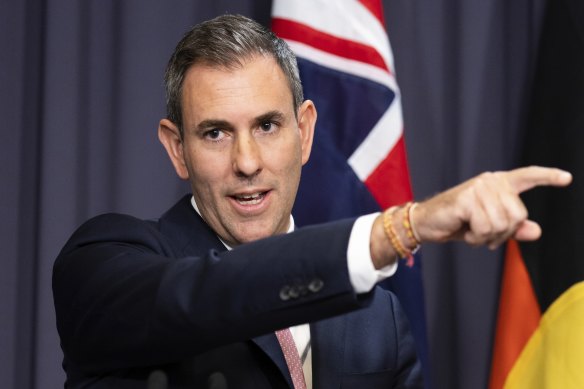 Jim Chalmers needs to broaden the discussion beyond the stage 3 tax cuts.Credit:Alex Ellinghausen

Doing most of the heavy lifting in preparing the public for a possible shift is Treasurer Jim Chalmers. He wants a “big national conversation” about how it will fund the growing demand for government services and shoehorn more than $2.4 billion in election spending promises into his October budget while high inflation, a rising interest rate bill, growing expenditure in crucial areas such as health and disability services, and gloomy global growth forecasts put pressure on the bottom line.

But Chalmers knows full well that, while he may put the economic case for a shift in policy, to abandon the election promise would be politically damaging, perhaps fatal, for the government, if handled badly. Labor has good reason to worry. Former prime minister Kevin Rudd saw his leadership decimated in 2010 when he delayed the promised emissions trading scheme and Julia Gillard suffered the same fate later that year when she did a deal with the Greens on a price on carbon only months after promising there would be no carbon tax.

Opposition Leader Peter Dutton and his front bench have been sharpening their attack lines all week.

That is why some in Labor are publicly advocating that it should stick with its promise to deliver the tax cuts. Andrew Leigh, assistant minister for competition, charities and treasury, told Sky News: “We are sticking to the policies we took to the election. I think that’s important for the integrity of the democracy.”

But much of this debate presupposes that Labor has only a binary option before it: either keep the tax cuts, or ditch them. There are, of course, other options, and The Age would argue that, in the two years until these policies are due to be implemented, any responsible government should be trying to work out what is best possible policy.

There is a strong case for targeted income tax cuts that address bracket creep. Barrenjoey senior economist Johnathan McMenamin has pointed out that people moving into higher tax brackets due to inflation have been “weighing on household income growth for quite some time”. The greatest effects of bracket creep occur at the higher income levels.

Low and middle income earners received the bulk of the financial benefits from the stage two tax cuts that began in July 2020. But those benefits could be largely knocked out by the end of the low and middle-income tax offset, which is expected to be phased out next year.

The offset costs more than $12 billion, and an analysis reported by senior economics correspondent Shane Wright shows that its removal will reduce the annual take-home pay of 10.2 million people who earn between $48,000 and $126,000 by $1500. For those earning $90,000 or less, even if the stage three tax cut goes through, they will still be worse off after the loss of the offset. If the stage three cuts are scrapped, they will be even further behind.

But focusing the argument only on the stage three cuts means this debate is too narrow. As Rod Sims, former head of the Australian Competition and Consumer Commission, argued this week, the Australian budget is in structural deficit — it will not be able to fund its vital services without rasing more taxes. He added that personal and company taxpayers are already shouldering more than their fair share of the burden, contributing more than 70 per cent of our tax revenue.

The CEO of the Grattan Institute, Danielle Wood, recently made the case for looking elsewhere. She named family trusts, capital gains tax, negative gearing and superannuation tax concessions as fertile fields. In our view, it is incumbent on Chalmers and the current parliament to open up that broader tax debate.

It’s inevitable that this discussion will get bogged down in a black and white political fight about broken election promises. A competent government, one that can explain what it is doing and why, would be able to talk its way through this. But our only recent experience of this is of governments who lack the competence to make the case for big reforms. For the sake of the country, we should hope this government is up to the task.

Michael Bachelard sends an exclusive newsletter to subscribers each week. Sign up to receive his Note from the Editor.