NSW Swifts booked their place in the Super Netball grand final after surviving a late fightback from the GWS Giants to claim a one-point win in the preliminary final.

Only points percentages split the two teams at the end of the regular season and the margins were also slim on Saturday afternoon, when the Swifts earned a shot at the title with a 62-61 win. 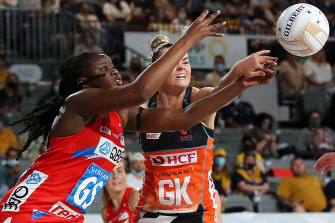 Sam Wallace and Matilda McDonnell tussle for the ball at Nissan Arena in Brisbane.Credit:Getty

The star of the show was Swifts shooter Sam Wallace. She finished the game with a shot accuracy of 98 per cent, just two days after she lost her father and auntie in her native Trinidad and Tobago.

"My aunt passed away two days ago, but also my father. To have the support from the girls is awesome," Wallace said.

The Giants began brightly and dominated possession early. However, the minor premiers couldn’t make it count. The Swifts spent large spells of the opening quarter without the ball but proved clinical with it. As difficult as it would have been to overcome her family tragedy, Wallace remained sharp in front of the net. A dominant first quarter was completed by a flurry of late goals, including a super shot, which helped the Swifts take a commanding 20-12 lead at the first break.

It wasn’t just Wallace’s shooting that caused problems for the Giants but her defensive and off-the-ball work. Crucial rebounds, assists and support for fellow shooting partner Helen Housby kept the Swifts’ lead intact despite the Giants enjoying the lion’s share of the ball, with 55 per cent of the possession. Despite being behind on the scoreboard for the bulk of the match, the Giants never lost their fight. However, accuracy proved the difference at the break. The Giants mustered a conversion rate of 79 per cent compared to 94 per cent for the Swifts, who held a six-point lead at half-time.

The Giants returned with more composure and finally broke down the Swifts’ impressive full-court defence. Perhaps a hint of complacency crept into the Swifts’ defence, too. The Giants outplayed their rivals, finally turning their possession into points as their shooters found their range. The Giants won the third quarter comfortably and were perhaps unfortunate to be behind by the final break as they clawed themselves back to within a point.

Giants captain Jo Harten led the revival with a fierce approach but struggled to tilt the scale on the scoreboard. The Swifts were under huge pressure in the final quarter and a handful of late super shots for the Giants drew them level with a minute remaining in the game. However, the Swifts stood firm. A defensive interception from Sarah Klau in the dying seconds extinguished all hope of a Giants comeback and booked a grand final birth for the Swifts.