Heavy is the head that wears the frown

Sitting down to watch Succession, Jesse Armstrong’s dynastic (and slightly comic) soap opera about a corporate titan and his conflicted offspring, you can easily trick yourself into thinking you’re watching the modern counterpart to the 1980s super-soap Dynasty. This is, after all, a smouldering saga of betrayal and bloodlines in which control of an empire is at stake.

But in truth, it is more clearly the descendant of I, Claudius, the BBC serial based on Robert Graves’ novel of the same name, about the machinations behind the scenes of the Roman Empire. With perhaps a dash of King Lear, Shakespeare’s play about the complex handover of power from a sovereign to his three offspring. 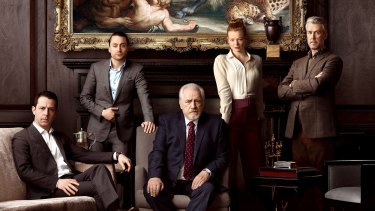 There are no catfights and caviar in Succession. Rather, it’s a West Wing-style piece that plays more subtle notes to make its tune. That is, when it’s not firing off darkly comic lines. There are lots of walk-and-talks, though as the third season opens all of that has been upended (more on that in a moment) and we’re swimming in uncertain and unfamiliar waters.

It is true that there is a melodramatic touchstone to the show. The 1980s super-soaps Dynasty and Dallas (and Dallas′ stablemate Falcon Crest) were obsessively dynastic stories. As with Succession, the plot points touched on inheritances and stock percentages as much as they did on the people who held and traded them.

But in the 1980s it was enough to think that rich people were miserably unhappy based on wealth alone. That all their ill-gotten gains would ultimately give them was heartache, betrayal and, occasionally, a bout of amnesia or a long-lost sibling.

Succession dives into a more richly textured world. It is true the series traces its origin to a more conventionally biographical piece on the Murdochs, and there are some threads of that story which survive into this one. But the tonal notes of Succession lean into Shakespeare as much as they do Sun Valley.

Trying to unpack the series as its third season kicks off, while also giving away no spoilers, is a challenge.

In one sense, Succession is not the kind of show you can land on in episode one of the third season and make much sense of. If you’ve not watched it, catching up with the first two seasons is recommended.

But if you’re feeling bold, here’s your quick primer: the vast business empire of Waystar RoyCo boss Logan Roy (Brian Cox) is teetering on the brink and, in the second season finale, his son Kendall (Jeremy Strong) staged a sort-of-coup by dumping his father into a massive scandal.

As we pick up the story, Roy’s youngest daughter Siobhan (Sarah Snook) is advocating a cautious strategy. Her brother Roman (Kieran Culkin) encourages his father to cut their brother “into a million pieces”. (There is no love lost between Kendall and Roman, in case you hadn’t noticed.) Kendall, meanwhile, is gambling that the scandal, involving the cover-up of crimes in one of the company’s divisions, will be enough to trigger a genuine succession crisis.

Every part of Succession shimmers. Armstrong’s scripts are top-notch, brought to life by cinematographer Andrij Parekh, production designer Stephen Carter and director Mark Mylod, and set magnificently to Nicholas Britell’s score. Individually they are excellent but as pieces of a larger mosaic they dazzle.

And the cast are a revelation. Every one of them. Brian Cox’s performance as the brash old dog Logan Roy holds this deeply broken world together. But Jeremy Strong’s Kendall is gloriously unhinged, and Sarah Snook’s politically shrewd Shiv and Kieran Culkin’s smart-mouthed Roman both begin to bare their teeth as the prize – the crown, if you will – seems to come within reach.

Succession airs on Fox Showcase on Mondays from October 18 express from the US at 12pm and replayed at 8.30pm.