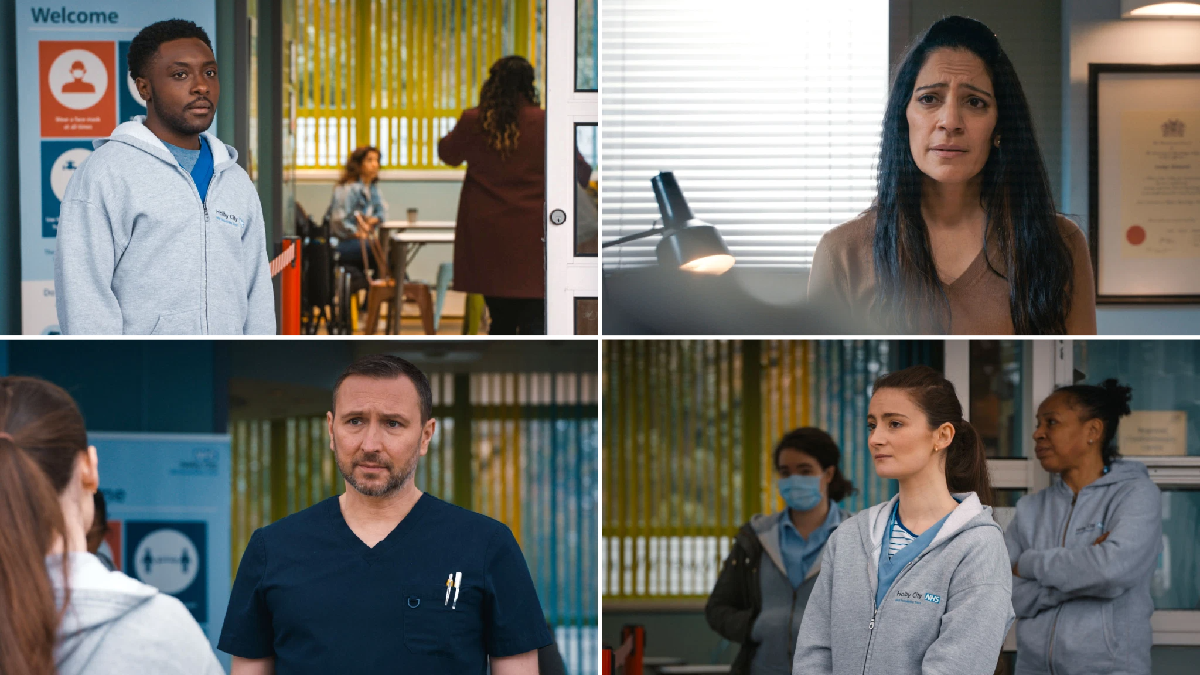 Donna Jackson (Jaye Jacobs) calls the nurses out in a protest against overtime and working conditions in tonight’s Holby City – much to the annoyance of CEO Henrik Hanssen (Guy Henry).

We know that Hanssen has a lot on his mind following the death of Reyhan Shah, the man who abused him as a schoolboy, so he’s in no mood to listen to the nurses’ demands. ‘They’ll give up when it gets dark and clock in tomorrow,’ he assures Fletch (Alex Walkinshaw) and finance director Jeni (Debra Stephenson). But when Donna pushes Hanssen to take some action, she’s shocked by what he does next. Has Donna gone too far?

Elsewhere, Dominic (David Ames) assures Sacha (Bob Barrett) that he’s recovering well from his most recent surgery and he’s ready to go home – but he’s concealing the fact that he’s in agony. Will Sacha notice his pain before Dominic does something he might live to regret – if he lives at all?

When Andrei (Sonny Poon Tip) finds Kian (Ramin Karimloo) collapsed on the floor because of the drugs he’s taking, he knows it’s time to do something and he goes to see Lucky Simpson (Vineeta Rishi) and tell her everything. But with Kian back at work and pretending he’s fine, is there anything she can do – or will Kian pull the wool over her eyes yet again?

Josh (Trieve Blackwood-Cambridge) and Jeong-Soo (Chan Woo Lim) have to step up and take charge of an overstretched AAU. Josh has his eye on Ric Griffin’s record for treating a certain number of patients in a given time. Jeong-Soo, meanwhile, is preoccupied by one case in particular. Jemima (Amanda Wilkin) has injuries that worry him, but can he get her to confide in him?

And when Ange (Dawn Steele) arranges to meet Josh in the basement for a romantic assignation, he’s not prepared for what he finds.