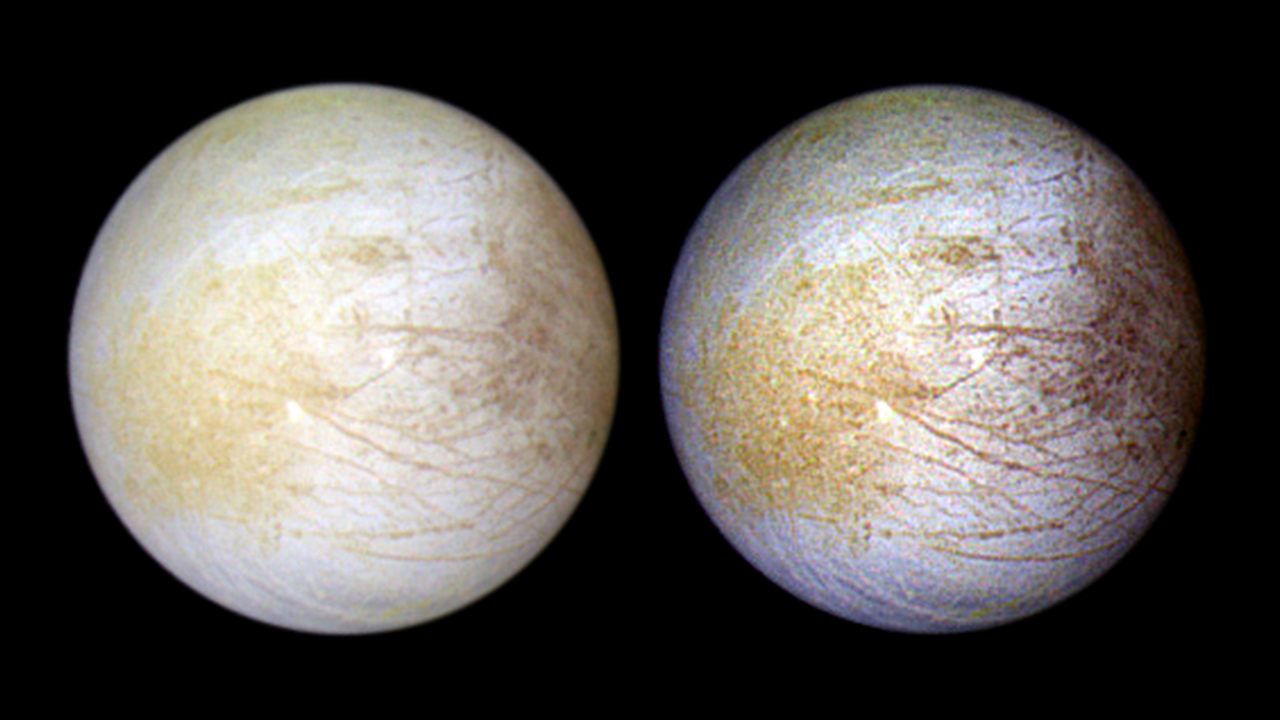 There is intense speculation that one of Jupiter’s moons may hold the conditions needed to support alien life.

The icy moon of Europa may have subsurface lakes where it’s possible that alien creatures could survive.

Now, the Hubble Space Telescope has made a discovery that adds fuel to the fire.

The space-based lookout spotted water vapour on Europa’s trailing hemisphere – that is, the hemisphere that’s always opposite it’s direction of motion.

That’s puzzled researchers, who don’t understand why water vapour (the gaseous state of water) isn’t on the moon’s leading hemisphere.

‘The latest twist comes from archival Hubble observations, spanning 1999 to 2015, which find that water vapor is constantly being replenished throughout one hemisphere of the moon,’ wrote the European Space Agency (ESO).

‘That’s a bit mysterious. Nevertheless, the atmosphere is only one-billionth the surface pressure of Earth’s atmosphere.’

Hubble didn’t spot the water vapour directly, the agency explains, but rather the ultraviolet signature of oxygen.

The experts reckon the water vapour isn’t coming from within the moon, but rather it’s the effect of sunlight causing the surface ice to sublimate.

‘Europa is so exciting as a potential abode of life it is a target of Nasa’s Europa Clipper and the Jupiter Icy Moons Explorer (JUICE) of the European Space Agency – planned for launch within a decade,’ the ESO said.

How many moons does Jupiter have?

Europa is one of Jupiter’s better known moons, but the Gas Giant actually has 79 moons in total.

The four largest of these moons are known as the Galilean moons, named after Italian Astronomer Galileo Galilei discovered them over the winter of 1609.

The other three moons are Io, Ganymede and Callisto, and are visible with an amateur telescope on a clear night’s sky.

These four celestial bodies are among the largest objects in the Solar System, after the Sun and its eight planets.

With a diameter larger than many dwarf planets, these objects could once have been considered planets in their own right – Ganymede, for example, is the largest moon in the Solar System, and is even bigger than the planet Mercury.

After the four Galilean moons, which were the only known moons of Jupiter until 1892, Amalthea was discovered, at the time the “fifth moon of Jupiter.”

As telescope technology and lens making improved over the 20th Century, a further 18 moons were discovered.

It was only at the turn of the century, that tens of other moons were discovered, led in part by the work of American astronomer Scott S. Sheppard.