JAWS hit the floor at Leopardstown Racecourse as 300-1 shot He Knows No Fear sprung a huge shock.

Luke Comer's horse became the biggest-priced winner in British and Irish racing history when he took home the bacon in the 2.30 at Leopardstown. 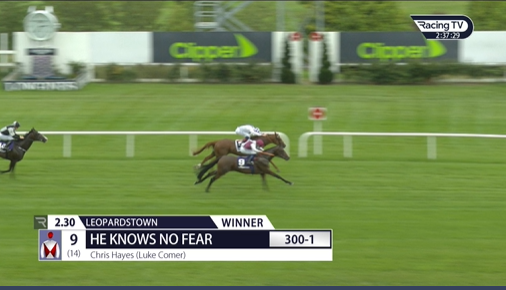 He broke the long-standing record that had stood since 1990 after Equinoctical 250-1 success at Kelso Racecourse.

After only one start, He Knows No Fear, lived up to his name when breaking well and pipping even money favourite Agitaire on the line.

Jockey Chris Hayes just managed to edge his horse up on the outside to deny the strongly-fancied rival.

The bookmakers were left speechless but are always the real winners when the longshots get the better of a well-punted rival.

OFFER OF THE DAY

T&Cs: New customers only. Place your FIRST bet on any sportsbook market and if it loses we will refund your stake in CASH. Max refund for this offer is £20. Only deposits made using Cards or Apple Pay will qualify for this promotion. T&Cs apply. Paddy's Rewards Club: Get a £10 free bet when you place 5x bets of £10+.

Coral's John Hill, said: "He Knows No Fear lived up to his name at Leopardstown, causing the biggest shock in the history of UK and Irish racing.

"The previous record was set 30 years ago at Kelso and that came over jumps. This was on the Flat, which makes it even more surprising.

"Results like this are what make sport so great as every now and then the underdogs come out on top."

Had you backed the horse on the Betfair Exchange you would have been quids in with the winner paid out a staggering 1000 BSP.

William Hill reported 86 lucky punters managed to back the 300-1 shot.

"We have been astonished that so many punters managed to pick a winner at 300-1," said William Hill spokesman Rupert Adams.

"It is an astonishing feat and one that may not occur again in my lifetime."