Gun shop owners will fight the decision to suspend the sale of guns and ammunition in Victoria following a spike in weapon registrations in the midst of the coronavirus pandemic.

An association representing up to two dozen Melbourne gun dealers is preparing a legal challenge against the ban which they say could financially devastate the families of hundreds of firearms traders. 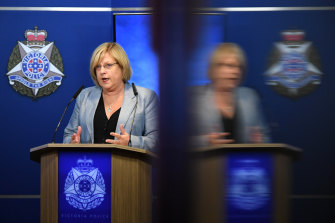 On Monday Victoria Police, with the backing of the Andrews government, temporarily banned the sale of weapons to recreational shooters, who make up a large proportion of the market. Police said there had been a spike in firearm applications and stockpiling of weapons this month.

Gun dealers strongly disputed the police's claims and say the surge in demand was caused by shooters buying products before a 15 per cent price rise on many firearm products that was due to kick in on April 1, caused by the drop in the value of the Australian dollar compared with the US dollar.

In the legal bid, they will argue Victoria Police acted unlawfully by using section 69 of the Firearms Act – which relates to varying firearm licences – to ban transactions.

The National Shooting Council, which represents more than 8000 shooters across the country, has received legal advice that the particular section cannot be used to make changes based on events such as a health pandemic. The action is likely to be launched at VCAT.

"Gun shops have been complying with the social distancing requirements, so the decision to close them without any notice or identified problem has not been made for health reasons," a spokesman for the council said.

"The result of this decision could drive many dealers, smaller ones in particular, out of business."

A Victorian Police spokesman said police "sought legal advice internally" before it made the decision to ban sales. The spokesman said firearms dealers were contacted after clearance was given to enforce the ban.

Five gun dealers spoken to by The Age strongly disputed the argument about stockpiling that was made by Police Minister Lisa Neville and Deputy Commissioner Shane Patton. Mr Patton said there were 2200 firearms applications last week, double the amount of the previous week.

Mario Mori, a gun dealer in Oakleigh, said his business of three decades would likely collapse as a result of the ban.

Mr Mori said the recent surge in demand had "a lot to do" with the scheduled price hikes, which many gun owners were aware of.

A Melbourne gun store employee, who did not wish to be named, said the store had only discovered the ban after it was announced. He said many people were buying products in recent weeks because they had more leisure time to hunt.

"We've got six employees here who we might have to lay off now. There's not much point in us being here," he said.

Jeff Bourman, a Victorian Upper House MP from the Shooters, Fishers and Farmers Party, said the government should admit the ban was "another shafting of the most law-abiding segment of society".

"What is the message? That law-abiding people who follow a legitimate process, a police-approved process, are not to be trusted?"