‘I gave it everything’: Horton misses chance to defend 400m gold

A shattered but philosophical Mack Horton told his Australian conquerors Elijah Winnington and Jack McLoughlin to take on the world after the reigning Olympic champion fell short in his quest to defend his gold in Tokyo.

Horton became one of the biggest names in Australian sport when he beat Sun Yang in Rio. So much had been written about their potential rematch in Tokyo but now neither stand to be in that race after Horton was overhauled by brilliant youngster Winnington and the ultra-tough Jack McLoughlin. 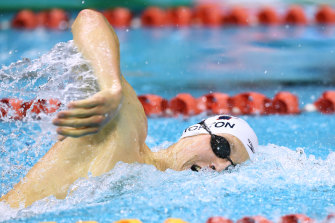 Mack Horton competes in the men’s 400m freestyle heat, in which he finished second to Jack McLoughlin.Credit:Getty

In a race where five of the eight finalists managed to swim under the qualifying mark, Winnington prevailed in a slick 3:42.65s that puts him in the gold medal conversation in Tokyo. McLoughlin clocked 3:43.27s with Horton third in 3:43.92s.

Much had been made of Horton’s form but he looked back to his old self as he loomed up to lead going into the final 300m after a breakneck start where half the pool was under world record pace. But he was unable to conjure his customary barnstorming finish as Winnington produced his powerhouse kick to thunder clear.

A gracious Horton spoke after the race, saying he left nothing in the pool and urged Winnington and close friend McLoughlin to carry on the fine legacy Australia has in the race.

“Very happy for the boys, Jack works his arse off, has done for years, Elijah is so talented. Hopefully they can keep carrying the 400m legacy for Australia,” Horton said.

“I was comfortable pretty much the whole way. I thought I had it to be honest. I was just on the wrong side of the pool, breathing the wrong way, I literally gave it everything. As long as you give it your all.

“Every time you turn in the 300m, you always question if there is another 100m in there. That was the same today, clearly not enough.”

Winnington has long been one of the nation’s best rising talents and the Dean Boxall product is rising above the pack. He said this was a moment he had dreamed of and paid tribute to Horton, who he described as his hero.

“It means everything to me. I dreamed of this moment as a kid. To see that I touched the wall first and I made the qualifying time, it was pretty special,” Winnington said.

“I had a little moment with Mack after that race and I pretty much told him he’s my hero. I remember being here five years ago at the Rio trials, watching Mack go 3.41s, a second faster than what I went there, so he’s an incredible swimmer and always will be an incredible swimmer so it means a lot that Mack would speak that highly of me.”

Earlier in the night, Emma McKeon became the first Australian swimmer to punch her ticket to the Tokyo Games after flirting with the world record in the final of the 100m butterfly at the trials in Adelaide.

The 27-year-old continued her brilliant run of form as she touched the wall in 55.93s, smashing her former Australian mark of 56.18s and edging closer to Sarah Sjostrom’s world record of 55.48s.

McKeon has been threatening to produce some sizzling swims all year and delivered in fine style on the first swim of the night. Her 100m freestyle and 200m freestyle could be anything this week given the way she’s campaigning.

Brendon Smith from Nunawading lowered the Australian record in the 400m individual medal to earn a spot on his first Olympic team, with Carlile’s Se-Bom Lee also under the qualifying mark.