A rise in the number of unsupervised children using video-chatting apps while their parents work from home has created the "perfect storm" for cyber safety.

Parents are being warned that periods of extended home isolation could be accompanied by an increase in paedophiles lurking on the popular social media video apps that their children are using such as Houseparty, Zoom, WhatsApp and TikTok. 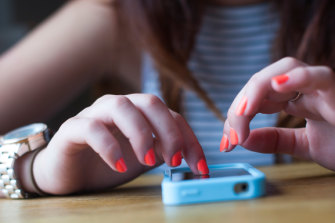 Kids are at risk of falling prey to predators.Credit:AAP

Cyber safety expert Susan McLean said those wanting to harm children would be looking to take advantage of the social isolation rules, with criminals skilled at exploiting online opportunities to gain access to young people.

Mr McLean said the consequence could be dire.

“Kids need to be connected but all general cyber safety rules don't go out the window because of COVID-19. In fact, the risk to kids and teenagers is greater than ever before,” Ms McLean said.

“Having kids at home … while parents are also working from home is absolutely the perfect storm unless there is supervision.

“Paedophiles are not dumb, they know that there are more kids online than ever before using apps and platforms.”

Ms McLean, who was a Victoria Police officer for 27 years, said it was paramount children were never alone in their bedrooms with access to web-camera devices.

“Research shows that about 30 per cent of young people are contacted by random strangers on the internet,” she said.

“Use the next fortnight to get on top of this and lay the ground rules because you don't want to be winging this."

How to stay safe online while self-isolating

She said it wasn’t something young people talked about often but she urged anyone who felt unsafe to tell a parent or friend immediately.

Lexi said it was worryingly common for young people to have public social media accounts in the attempt to gain “more friends” but that the risks were high.

“I haven't used Zoom but downloaded Houseparty about a week ago and everyone’s getting it. You pretty much just add your friends from your contacts and other social media platforms and you just press their names to join their calls,” she said.

“I know a lot of people that just add the randoms because they want to have lots of people on their accounts. Not many people say no to them."

Lexi said while her friends didn’t talk about cyber safety that much, it wasn’t uncommon to be contacted by much older men.

“Get onto it as soon as you realise it’s not someone you know and block them," she said.

"If it’s anything more serious you need to tell someone."

According to the Bureau of Statistics, 97 per cent of young people aged 15 to 17 are online, making this age group the highest users.

They spend an average of 18 hours per week online.

Anyone who discovers prohibited or inappropriate material online can contact the eSafety Hotline via esafety.gov.au.

Reports of suspected criminal activity can be made to Crime Stoppers on 1800 333 000 or a local police station.v