Myf Warhurst reckons she may have been to every single music festival that’s ever been on. But she can still can pick “that moment”.

It was Meredith, of course. The Dirty Three were playing. It was that night in 2004 when the storm came through and embraced the stage in electric, elemental harmony. 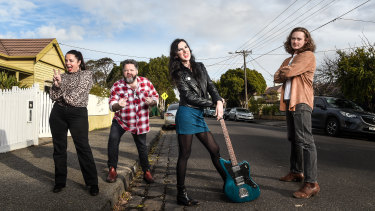 Join Myf Warhurst, Wally Kempton from The Meanies, Adalita from Magic Dirt and Liam Gough from The Teskey Brothers for The Long Weekender on Monday.Credit:Justin McManus

“There was lighting and thunder, it was almost like a religious experience,” she recalls. “The Dirty Three are transformative, they transport you. But in the storm and the thunder, out in nature as well, oh! I don’t think I’ll ever forget that.”

Warhurst has been pulled in, at super-short notice, to present The Long Weekender, a free stream of some of the best sets from Victorian music festivals from the past two decades, online Monday.

It’s supported by the Victorian government, including $360,000 to be divided between the artists and festivals who feature in the show. It will take you to Falls, Meredith, Queenscliff, Golden Plains, Brunswick and A Day on the Green and more, and feature electrifying sets from Victorian artists including You Am I, Frente!, The Teskey Brothers, The Dirty Three, Courtney Barnett and Spiderbait.

This week the heads of several of these festivals signed an open letter to the government, alongside other leading names in music, arts and hospitality, pleading that the sector to be allowed to reopen as quickly as possible in the wake of the latest “circuit breaker” lockdown.

The letter warned of financial ruin in the industry: festivals fear a repeat of the fate dealt to Bluesfest earlier this year, cancelled at the last minute by the NSW government after infectious visitors from Queensland led to a case of local transmission in Byron Bay. 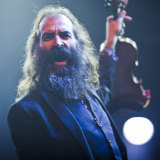 Warren Ellis with The Dirty Three at Meredith Festival.

Creative Industries minister Danny Pearson said he knew the live music scene “had it tough this past year”, and the online event would provide direct relief to artists.

Warhurst hopes the event will provide a sense of community – that magic a festival creates that was so missed over the last year.

A music festival, she said, means “artists are able to commune with an audience… it’s a sense of being together, in a shared experience, an arc.

“Hopefully The Long Weekender will be a great reminder of what that’s like, and how much it means to us.

“We’ve all been cooped up for so long, hopefully this will be a bit of an outlet before we get to the real thing, and get us all excited for when that time happens.”

The Long Weekender will stream free on ACMI’s Cinema 3 from noon Monday to midnight. More information at together.vic.gov.au.

In need of some good news? The Greater Good newsletter delivers stories to your inbox to brighten your outlook. Sign up here.