Joe Jonas is perfectly fine (see what I did there?) with his ex-girlfriend Taylor Swift recording all of her old songs—even the ones about him. In case you’re not up to date on Taylor canon… Joe and T-Swift dated like a bajillion years ago and she wrote songs about him for her Fearless album. Taylor is in the process of rerecording her old music and released Fearless (Taylor’s Version) first. Apparently, Joe thinks it’s v cool and is a bit inspired.

“I think I would probably re-record our entire first album,” Joe told Buzzfeed when asked which Jonas Brothers song he would rerecord. The first JoBros album is It’s About Time, which includes hits like “Year 3000” and “Mandy.” He continued, “Just do something like what Taylor [Swift] did recently, which I thought was really clever.”

Do you hear that? Yeah, it’s the sound of Swifties dying everywhere. Taylor absolutely does not need her ex’s stamp of approval on anything, but it’s cool to know he supports her even after all of these years. 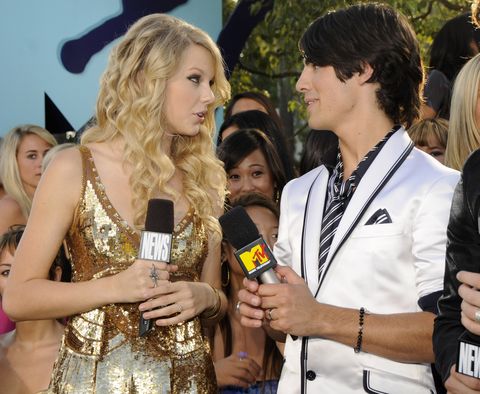 Joe broke up with Taylor while she was recording 2008’s Fearless. Not all of the songs made it on the album, but she released them on her rerecorded version. One track titled “Mr. Perfectly Fine” includes lyrics that have fans thinking it’s about Joe.

Remember Sophie Turner? Yeah, she’s Joe’s wife and baby mama. She also thinks the track is about her hubs. After the song’s release in April, Sophie shared a screenshot of herself listening to the track and wrote, “It’s not NOT a bop.”

LOL. Taylor reposted Sophie’s reaction to her Instagram Stories and added, “Forever bending the knee for the 👑 of the north.”

You love reading celeb news. So do we! Let’s overanalyze it together.