During their more experimental later years, The Beatles did produce some hard rock tunes like Helter Skelter and I’ve Got A Feeling. But there was one track in particular that John Lennon called “the first heavy metal record”. The song in question featured on 1965’s Help!

Spotted by Far Out Magazine, Lennon felt The Beatles’ heavy metal track was Ticket To Ride.

When listening to the 1965 song today it does sound very tame, but to be fair to the late Beatle it does move from a typical pop tune into something more chaotic. 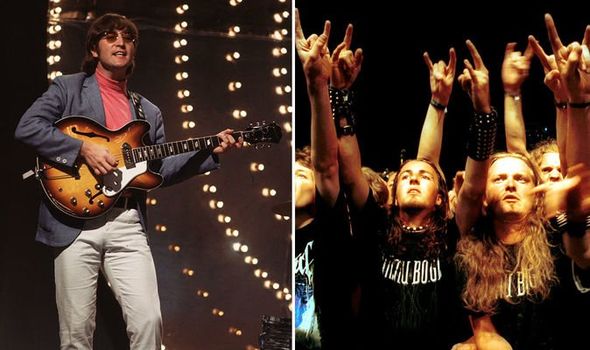 While in 1980, Lennon told Playboy: “That was one of the earliest heavy-metal records made.

“Paul’s contribution was the way Ringo played the drums.”

In 1994, Paul McCartney said of the “radical” Ticket To Ride: “I think the interesting thing is the crazy ending instead of ending like the previous verse, we changed the tempo.

“We picked up one of the lines, ‘My baby don’t care,’ but completely altered the melody.”

McCartney added: “We almost invented the idea of a new bit of a song on the fade-out with this song…

“It was quite radical at the time.”

Earlier this month, Macca opened up on reuniting with Ringo Starr and how they “get bl**dy emotional.”

Speaking with PA, the 78-year-old said: “In 2019 when I finished touring in Los Angeles, Ringo got up on stage and we were doing Helter Skelter together.”

He continued: “And he’s drumming away and I’m singing facing front because I was on the mic.

“But when I wasn’t on the mic, in the solo breaks and stuff, I really made a point of turning round and watching this guy drum.”

“And I’m thinking, my god, you know the memories across this 10-yard gap here.

“Him on the drums and me on the bass, the lifetime that’s going on here.”

The Beatle added: “So, you know, it’s a sort of magic.

“And he and I these days get quite emotional about it.

“Because we should. We ought to.

“It’s a bl**dy emotional thing, the years. If nothing else.”