A judge has ordered a Colorado man to remain jailed after he allegedly attempted to flee to Switzerland to escape charges in the U.S. Capitol riot, an event in which the judge questioned the role of former President Donald Trump.

U.S. District Judge Emmet Sullivan, in a ruling issued Wednesday, deemed Jeffrey Sabol, 51, a flight risk and a danger to the public after video appeared to show the father of three wrest away a fallen officer’s baton and use it against another officer during the Jan. 6 insurrection.

“He stripped a vulnerable police officer of his police baton,” Sullivan wrote in his ruling. “He then used that stolen police baton to force another officer away from his post and into a mob of rioters who proceeded to viciously attack him, leaving him bleeding from the head. Mr. Sabol himself has admitted much of this, and the weight of the evidence against him is strong.”

Sullivan quoted Sabol’s attorney, who described Sabol as having been caught up in “the frenzy” of events during a pro-Trump rally outside the Capitol ahead of the riot, and influenced by “things that were said to the crowd of people by people like Roger Stone and Rudy Guiliani and the President himself.”

“To be sure, to what extent President Trump’s words and actions led to the violent and shocking storming of the U.S. Capitol on January 6, 2021 is an important question, and one that could still have legal consequences for the former President and his prominent supporters,” Sullivan wrote.

After allegedly participating in the riot, authorities said Sabol traveled back to his home in Colorado where he proceeded to destroy electronic devices and anything else that he believed could be used as evidence against him. He also moved two firearms that he kept at his house to an associate’s residence, according to the court ruling. 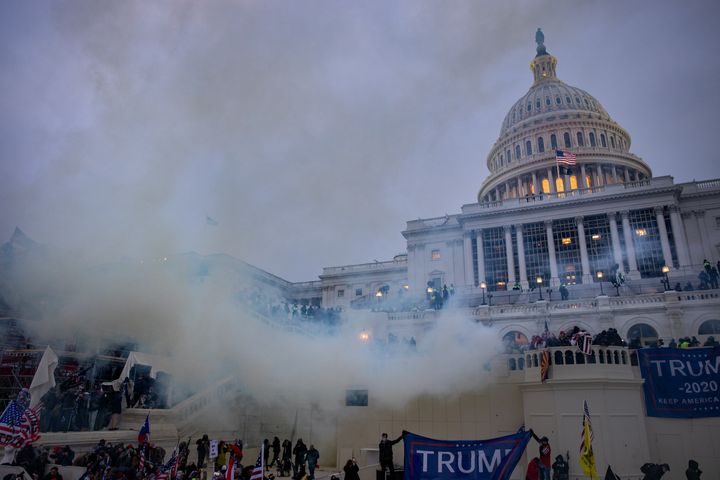 In the following days, according to the court ruling, Sabol traveled to Boston, with plans to fly to Switzerland in hopes of avoiding extradition. He got spooked when he saw police officers at the airport, so he rented a car and drove to New York instead. Along the way, he discarded his cellphone out of concern that he was being tracked by law enforcement, according to the ruling.

Sabol was pulled over and arrested on Jan. 11 after he was allegedly seen driving erratically. Police described him as covered in blood from what he said were self-inflicted cuts to his thighs and arms in an attempt to end his life.

“I am tired, I am done fighting,” he told police, according to Sullivan’s ruling. “I was fighting tyranny in the D.C. Capitol.”

In a later hospital interview, Sabol allegedly admitted that he was at the Capitol but said he was only there to save officers whom he saw “needed help.” He said he could not recall if he hit an officer with a police baton, saying he was “in a fit of rage” and the details were “cloudy.”

Sullivan quoted Sabol’s attorney as saying that Sabol understands his beliefs about the legitimacy of the 2020 presidential election were “misguided” and “wrong,” and that he was “lied to about the election being stolen.”

“The President of the United States of America was telling citizens something evil has happened and you all have to go fix it,” Sabol’s attorney said.

Sullivan cited the seriousness of the allegations against Sabol, as well as his alleged attempt to flee the country and destroy evidence, as reasons to keep him jailed before trial.

“Mr. Sabol is facing a potential twenty-year prison sentence for assaulting Officer B.M. with a deadly weapon and is charged with seven other felony and misdemeanor offenses,” Sullivan wrote. “The evidence against him is strong. And he has already destroyed incriminating evidence and directed others to do so as well.”