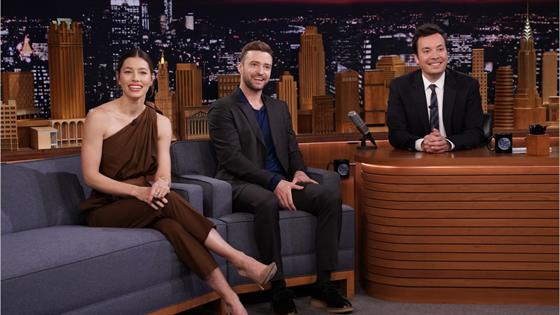 Justin Timberlake and Jimmy Fallon have one question: You home?

On Tuesday, the longtime pals teamed up to perform their “Quarantine Remix” during an at-home episode of The Tonight Show Starring Jimmy Fallon—and it’s super relatable.

Performing from their respective houses, Justin and Jimmy gave fans a look at how their social distancing has been going by showcasing the ways they’ve been keeping busy. Before diving into the tune, the “Don’t Slack” singer and the late night host hopped on a quick phone call to make sure that they’re both staying indoors.

“Yo,” a dog-eared sweatshirt clad Jimmy asked Justin. “You home?” Sitting inside of a cozy canopy, the NSYNC alum responded, “I’m home. You home?” Jimmy answered, “I’m home. Are you home?”

Then, things picked up as Justin began beatboxing, creating the remix’s catchy tune. From there, the dynamic duo used everyday items to carry out the beat, doing everything from slurping loudly from their iconic inception mugs to rhythmically banging their kitchen cabinets.

Switching it up, they put on an impromptu fashion show by trying on different sunglasses. Showing off their vast collection, they experimented with varying frames and incorporated them into the song. “Shades, shades, smaller shades,” Justin said as he tried on his family’s sunglasses, ending on a pair that definitely belonged to his and Jessica Biel‘s adorable 4-year-old son Silas.

Moving right along, they kept the beat going using kitchen appliances and utensils. Proving that he is a man of many talents, Jimmy ditched his whisk and spatula and played along by making fart noises with his hands, to which Justin hilariously replied, “Gross.”

Seizing the moment to tidy up his home, the “SexyBack” singer performed a series of chores while Jimmy carried the melody. After vacuuming the floor and wiping down his counters, he furiously walked up to the fridge and yelled, “I want to eat!” Joining forces, the pair came together to conclude the remix with a beautiful harmony, singing, “I’m home.”

Justin’s virtual visit to The Tonight Show proved to be a nostalgic one for the Grammy winner and the Saturday Night Live alum. While catching up with Jimmy about the origins of their epic bromance, the two reminisced about Justin and Jessica’s 2012 wedding and agreed that Jimmy had “the most fun” out of everyone there.

“Honestly, everyone who came to that wedding—everyone says you had the most fun at our wedding,” he said. “They’re like, ‘Oh, my gosh, your wedding was so good. Oh, man, Jimmy, man. He had a blast at your wedding.'”

Laughing as he recalled the evening, Jimmy chimed in, “I was like, ‘This is the best time ever.’ We were in a castle. It was just so much fun. We were dancing and there was music and every type of—oh, it was just…honestly, what a beautiful wedding. It was perfect. I just hope I didn’t, you know, disrupt it too much.”

After assuring his pal that he didn’t hinder his big day, Justin couldn’t let the moment pass without bringing up something hilarious that Jimmy did during the reception.

“No, let’s back up for a second,” Justin recalled. “I think you took the glass vase—they call it a vase in Europe—you took the glass vase over the flowers that was so delicately placed and you put it over your head and began to act like an astronaut—or something like that,” adding, “It’s one of those things where I think we starting riffing back in forth that half the wedding party thought that we had planned it out.”

Watch Justin and Jimmy reminisce over his wedding in the video above!